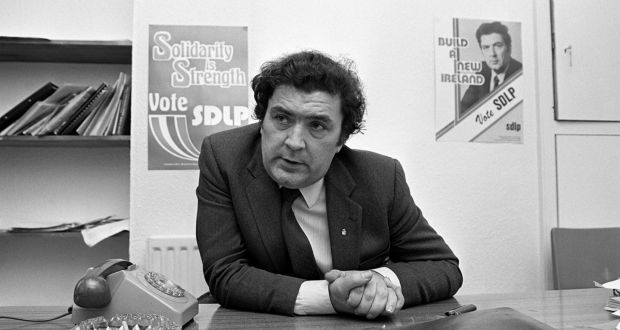 RARELY has the island of Ireland witnessed such an outpouring of grief and sorrow than when the news of John Hume’s death was announced on August 3. Tributes poured in from every corner of the globe, acknowledging his life-long commitment to bring about peace in Northern Ireland.

The signing of the Good Friday Agreement in 1998, which heralded the end of the violence in the North, was the culmination of his 35 year struggle to end sectarian politics and to establish a power-sharing executive, which is inclusive of both unionist and republican traditions. There has been extensive coverage of his political career; he has been hailed as one of our greatest leaders, standing alongside O’Connell and Parnell. He is revered for his genius, his tenacity, his resilience and doggedness, even in the face of trenchant criticism. He never faltered in his quest for peace.

Hume spent some years in Maynooth College studying for the priesthood. He left the college a few years before ordination. But he always acknowledged that his course of studies (which included philosophy and logic) in Maynooth influenced his thinking and practice throughout his long political career. He graduated with an MA in history, writing a thesis on the social and economic development in his native city of Derry in the 19th century.

I would like to reflect on the Christian principles on which he based his vision for a new consensus in Northern Ireland to enable both traditions to coexist peacefully. In the process he redefined Irish nationalism and the relationship between the Republic of Ireland and the UK and between communities in Ireland north and south.

Pope John XXIII enunciated some key principles of Catholic Social Thought in his ground-breaking encyclicals, Mater et Magistra (Mother and Teacher) and Pacem in Terris (Peace on Earth). The Pope encouraged Christians to be creatively engaged with the world as chief characteristics of the spiritual journey. John Hume echoed this call to Christians to be actively engaged in community development when, in a speech in 1968, he urged, “the Christian to get up off his knees and go out into the marketplace, that he must be concerned not just on one day of the week but he must be concerned with  all the problems, with the man who has not got a house, with the man who is hungry…” Hume dedicated his whole life to establishing the Kingdom vision of peace and justice of which Jesus spoke.

Hume was deeply influenced by Martin Luther King and the peaceful protests he organised to demand civil rights for the oppressed black minority in the USA. Catholic Social Doctrine gave tacit approval to the peaceful struggle for human rights. Pope John claimed that if civil authorities make demands which are contrary to or fail to acknowledge human rights their authority no longer exists and so the citizen is not bound to obey. There were some amazing photographs of Hume leading protest marches, courageously confronting military and political leaders, as he fought to establish peace with justice in the six counties. (Interestingly, Pope Francis has been unequivocal in his support for peaceful protests, insisting of course that protesters should not have recourse to violence.)

The imperative of non-violence has been a consistent teaching of all modern popes.  Pope Paul VI believed that “violence is uncontrollable, it provokes further violence and gives rise to new forms of oppression, more serious than before. Violence is contrary to the Christian spirit… the death of anybody as the way to liberation is utterly anathema.”

The repudiation of violence is of course one of the fundamental tenets of the Gospel vision, proclaimed by the Lord himself in the Sermon on the Mount, where he exhorted us to turn the other cheek and to love our enemy. Surely this gave John Hume a theological justification to initiate dialogue with Gerry Adams, long before the IRA had committed to a ceasefire. We now realise how central this initiative was to the whole peace process.

The Christian renunciation of violence must have had a profound influence on John Hume. He was scathing in his condemnation of violence perpetrated by republican and loyalist paramilitaries. In an address to the New Ireland forum in 1983, Hume excoriated the men of violence. “There is a minority in Northern Ireland and a minority even in the south who furiously abhor the work of reconciliation. Theirs is the way of violence. Their message is hatred. Their medium murder, their achievements division and destruction.”

He saw clearly the futility of the armed struggle which resulted in mayhem and deeper division. (It is disturbing that the Sinn Fein leader, Mary Lou McDonald, cannot admit, even now, that the IRA’s campaign of terror was a tragic mistake). Hume saw clearly that a radically new approach was needed.

I think that Hume’s greatest achievement was to redefine Irish nationalism. He rejected a narrow sectional sense of Irishness, which “excluded those who do not conform to its unique mould.” He emphasised again and again that we cannot ignore the unionist tradition which contains a strong allegiance to Britain. “We cannot wish this away any more than unionists can wish away our deep commitment to Irish unity. His goal was to accommodate in a new definition of Ireland “these uncomfortable  realities.”

“How would we propose to give unionists an adequate sense of security, physical, religious, political, and cultural in a new Ireland?” He was convinced there was only one solution: “we need a political process that included representatives of all sections of the community in Northern Ireland as well as the British and Irish governments”.

Only such a process had the potential, “to transform our society on the basis of agreement, consensus and partnership.” This meant of course replacing majority rule in the North with a power- sharing Executive that would represent the two communities. Without such a vision the Good Friday Agreement would never have happened.

I believe that Hume’s capacity to transcend a narrow ideological concept of nationalism was inspired by the fundamental Christian principle that we are sojourners, (i.e. passing through this world), that we have no lasting home here but that ultimately our destiny is the Kingdom of God. Such a vision relativizes nationalist dogmatism.

All citizens in the island of Ireland are deeply indebted to John Hume. Thanks to his dedication and personal sacrifices, we have a lasting peace in our land. His has bequeathed a valuable legacy: through dialogue reconciliation can be achieved and opposing traditions can co-exist peacefully.