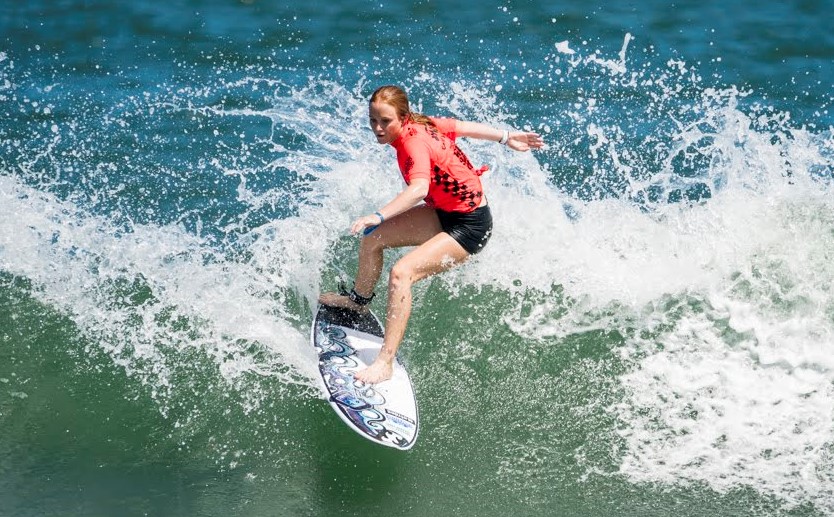 Grace Doyle pictured in action. “Surfing first piqued my interest when I was around 10 years old,” she said.

GRACE DOYLE never felt she had ‘serious talent’ when it came to surfing. For someone who has represented Ireland at international level that’s a hell of an admission.

“Surfing is such a hard sport to learn and there are so many frustrating moments in the first few years when learning to surf that I’ve always wished I’d started at a younger age,” she said.

“Even now (aged 30) I am always learning, or trying to learn new skills and techniques. There are so many elements to surfing, from the pop-up and surfing skills themselves, to reading the ocean and knowing where to be to catch a wave, and from being able to read the wave itself when you’re on it so that you can keep yourself in the power of the wave and get more out of each ride.”

Daughter of Margaret (nee Goulding) and her late father David, Grace lived in Hillview with her family before they relocated to Tramore when she was 12, a move which she clearly relished.

“We were already a family who loved the sea, between surf lifesaving, body boarding and jumping off diving boards in the Guillamene since I was six years old – we spent hours on the beach each summer,” Grace recalled. “Surfing was introduced into my family when my eldest brother Paul got surf lessons as a gift from my parents for his birthday one year.

“Then one of my other brothers, Kevin, started surfing too; he’s only a year older than me and we did a lot of things together growing up, so when he started surfing – I was around 10 at the time – I naturally followed in his footsteps. So I learned to surf on the same board that my brothers (Kevin, Stephen and Paul) learned on. It didn’t take long for me to realise that I loved it too; my brothers and cousin James really helped me progress, I learned loads by watching them and getting tips from them. I used to love watching them and other surfers, shredding the waves and having so much fun…Moving to Tramore was the best thing my family ever did since we’re such ocean and beach lovers and it’s where I now live and spend most of my time.”

Having attended the Mercy Primary School up to Fifth Class, Grace completed her primary education at Holy Cross Tramore, before progressing to Stella Maris Secondary School and the University of Limerick, where she earned a degree in PE and Maths Teaching.

Currently working in IT and tourism having taken a career break from teaching two years ago, Grace has put the interim to productive use.

“Competition surfing is totally different to free surfing as you only have 20 minutes to catch your two best waves, so at the end of the day there is a large element of luck involved. Besides, my focus lies largely on challenging my surfing, in pushing my skill level in more challenging waves both at home and abroad. For example, last year I got the biggest ‘barrels’ of my life in Indonesia, and this year I was lucky to score the opportunity to tow surf bigger waves in Hawaii. This is something I have wanted to try for a while and I really enjoyed it!”

Most of Grace’s travel has been for non-competitive surf trips and taken her to some amazing places.

“I’ve met the most incredible people in countries like Indonesia where I’ve been several times – I spent several summers there, home schooling three children of a surf resort owner – and I’ve been to Mexico, Costa Rica, El Salvador, Hawaii, Morocco and all around Europe. I love the island life and surfing amazing waves in tropical waters every single day.” 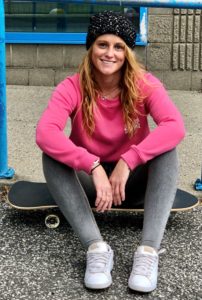 Hillview native and long-time Tramore resident Grace Doyle has a life-long passion for the sea.

Aged 22, Grace entered her first competitive surf event in Portrush, a senior event which she won. “I guess that gave me the courage and confidence to keep competing. I have since represented Ireland at the European Surfing Championships in 2015, where I finished ninth and in the World Surfing Games in 2018 and 2019 (both held in Japan)… but I feel I started surfing too late to have been a contender for the World Surf League qualifying tour, which also requires a lot of money to be able to enter and travel to all of the different locations.”

Six years previously, Grace lost her father to cancer. “It was the hardest time in my life, so surfing then became like a therapy for me in a way. The focus was more on using surfing to help me cope, have a focus and free the mind. My dad loved the ocean and always brought us surfing, so I guess I felt somewhat connected in that way too.”

What about the risk in her sport, which is several degrees higher than most indoor and field codes? “For me, it’s about being smart, about knowing your limits. Someone once told me that feeling nervous is not a bad thing. It means you are aware of the dangers and potential consequences and that you are not throwing yourself into a dangerous situation without thinking. My life outside of the waves would carry on as normal, sometimes with a minor injury or two that I have to also deal with, but that’s the same as with any sport…

“You think you have reached your limit and then your limits get pushed some more. I thrive on that feeling and the feelings that come with being out in the elements and surfing on nature’s waves. As the saying goes, only a surfer knows the feeling!” Long may that feeling remain for Grace Doyle.