Cath Lab issue “has gone on for far too long”, says Coveney

THE Cath Lab issue at University Hospital Waterford (UHW) has been “going on for far too long” according to Minister for Foreign Affairs, Simon Coveney. 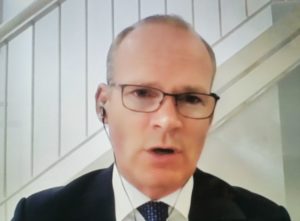 Speaking during a Dungarvan & West Waterford Webinar yesterday, Minister Coveney stated: “The Government has always said that this shouldn’t be a political decision; this should be a medical one. The financial resources are not the issue here. We have invested in increasing the capacity of the Cath Lab in Waterford University Hospital and will continue to do so; I’m very aware of the issue.”

Regarding economic matters facing Waterford and the South East, namely the North Quays, the Technological University application and the runway extension at Waterford Airport, Minister Coveney stressed: “They’re all very much on the Government radar and if you look at the success of the relatively modest investment in the Greenway between Dungarvan and Waterford and the phenomenal success it has been this summer: I remember I opened that, I cycled it with Paudie Coffey and that was, by State standards, a relatively modest investment. They’re the kind of investments that we need to be making to make sure that we’re driving quality of life which will attract investment into Waterford and the South East which is a very attractive place to live and work.”

Minister Coveney concluded the webinar by saying: “We’re living through an extraordinary period in history that will be talked about in 20-and 50-years’ time. I think people will remember 2020 for enormous disruption, a general election that didn’t produce a government for 140 days, to Covid coming out of left field which has just been incredibly tragic as well as disruptive for business and for families, to Brexit really biting for the first time because the transition period has literally disguises the decision that is Brexit until the end of this year.”

He continued: “This is a time in which we need to be listening to each other and what I would say to you (businesses in Dungarvan and West Waterford) is that if we’re missing something in Government, let us know, particularly on the Brexit side…prepare for the worst but hopefully politicians will be able to deliver something better. But please don’t let yourself be exposed when you could have actually acted to protect your business by doing it in the next couple of months, before the end of the year. There’s a lot of support and a lot of advice that’s available free of charge for businesses that actually look for it.”