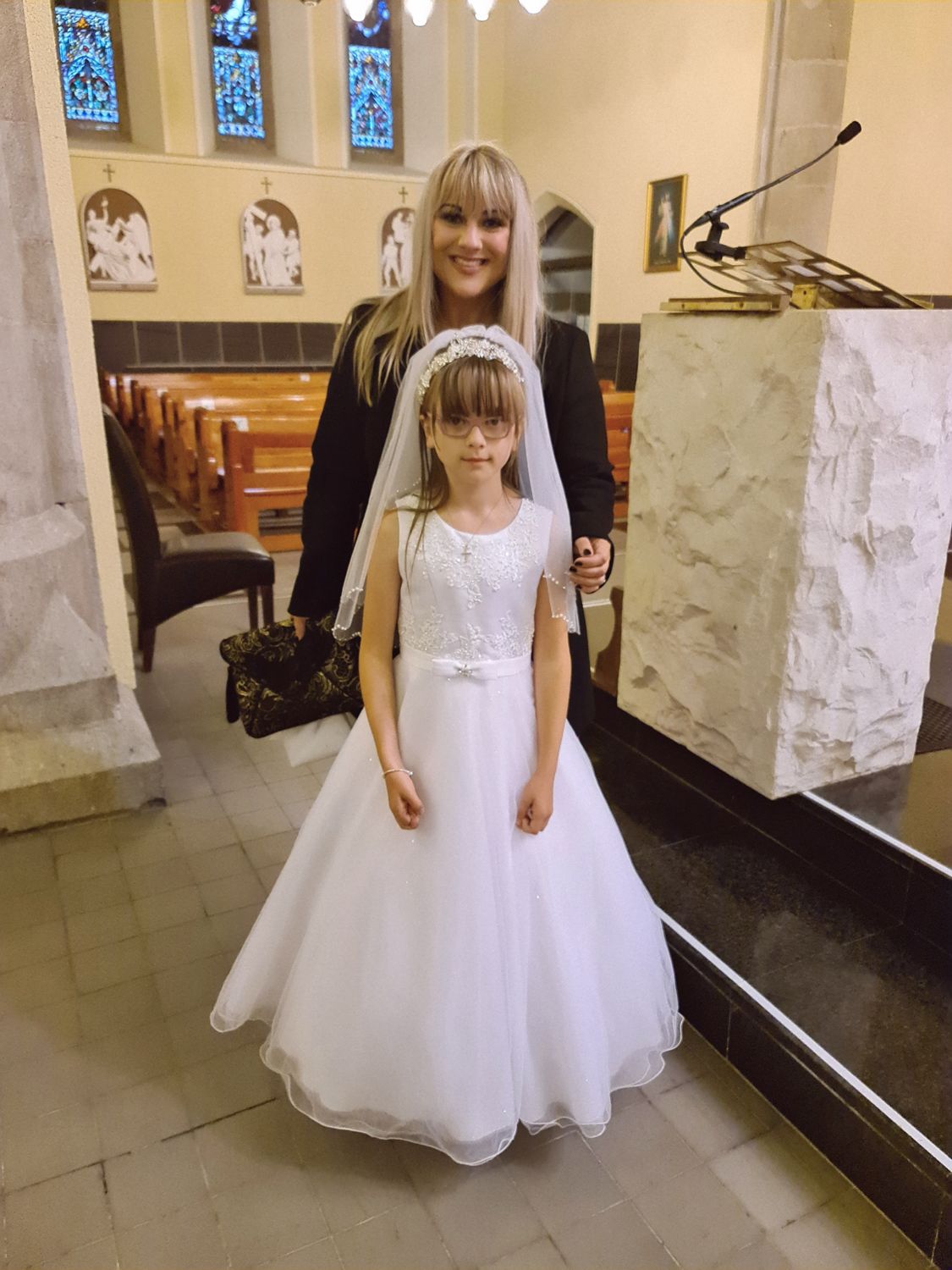 PREPARATIONS were made for the original First Holy Communion date in May, prayers and songs were learned, dresses were bought, bouncy castles were booked and hair appointments were made. When the pandemic hit, everything stopped and while children may not always have absorbed the severity of the health crisis, they deeply felt the loss of their special day.

So it was with tremendous excitement and relief that the doors to the Holy Cross Church in Tramore opened at 6pm last Friday, September 11, for the first Tramore communion class, in Gaelscoil Philib Barún.

Instead of the much hoped for, sunny May day, I brought my daughter from the car to the church amid strong September winds. We waved to her grandparents, who were all parked across the road, the restrictions prohibiting access to any extended family member. White dresses billowed and veils trailed in the wind as a queue of families waited on the steps leading into the church.

Newly installed wall mounted hand-sanitiser stations were being monitored by lay members of the church and one by one, mask clad adults led their child into the church. The seating was modified in line with health advice and there was one pew per family, with a pew kept free in between each family.

Up until last week, the plan was for children to receive their first holy communion in pairs, so families were seated appropriately for this to take place. The plan was changed on the day, and Fr. Shane O’Neill announced that children would walk up, one at a time with their parents to receive holy communion.

I cried much earlier than I thought I would, as Fr. Shane spoke directly to the children at the beginning of the mass. He said: “Instead of welcoming you all here on a sunny day in May, you are here on a dark evening in September.” Every child listened as he gave thanks to our frontline workers, who continue to work tirelessly during an unprecedented time in the Irish health system. Furthermore, he remembered those who could not be there, grandparents, cousins, and those who were unwell. His address was a stark reminder to me, amid all the noise of Covid-19 over the past few months, of what we really had endured thus far.

Two children from the class, who could not attend the event for health reasons, were welcomed as they listened to the radio from their homes.

There were no songs throughout the fifty-minute ceremony and no Communion candle, but the background music brought a hush to the church and families looked at one another over their masks, acknowledging the milestone of celebrating this event in such uncertain times.

When the time came to receive their first holy communion, I walked with my daughter to the altar, where Fr. Shane gave her the communion bread for the first time. Even from behind a shield, it was a significant moment, and she clasped her hands in prayer beside me. (It should be noted that two minutes had barely passed before her face contorted and she loudly whispered to a silent church, ‘you were right Mum, it does taste like cardboard.’)

I watched each family as they walked up and I wondered if I was sad that the children were not receiving their first holy communion as a group, I wondered if this ceremony without the songs, the artwork, and without the larger groups was a shadow of the mass as we know it.

For me, that answer is no, because being beside my daughter as she received her first holy communion, and hearing her, ever so quietly, say the word ‘Amen’ was a precious moment. That would have been lost in a group and I would not have been privy to its monumental importance. The ceremony was centred on the family unit, as opposed to the class, and as a result many parents who hadn’t received the communion bread for many years walked up with their child. As is the case with weddings, the restrictions necessitated a much more intimate First Holy Communion, where the focus was on each child and their family.

It wasn’t possible for a class photograph to be taken but individual families were photographed outside the church, with all children edging for a photograph with their teacher.

There was no rushing off to events after, given the late hour, so we obliged the request for a mint chocolate chip icecream from the Donut Bar. The kind staff gave my daughter a teddy as a present for making her first holy communion, and just like that, in one gesture for a moment there was no virus, no dangers, just a little girl who made her communion in her beautiful white dress. Covid-19 kept my sister in Wales, our parents at home and we had photographs which were missing some important people and for that, my heart hurt for the day that could have been.

The following day, we took photographs in the gardens of the Convent in Tramore, photographs my mother wanted, so they could match mine, before the closure of the Convent next year. After that, we drove to Waterford to the Holy Ghost Residential Home and my beloved Uncle, who has never in my 33-years missed a family event, came to the perspex screen to wave at my daughter.

The Communion class of 2020 were denied such an awful lot, but they were patient, they were wonderful and they finally got their day. This was by no means the Communion that we had all hoped for with celebrations and family, and my daughter asked me why there was thunderous applause at the end of the mass. I answered truthfully, “because none of us knew if this day would come, and who would be here to see it. We clapped in gratitude for this day.”