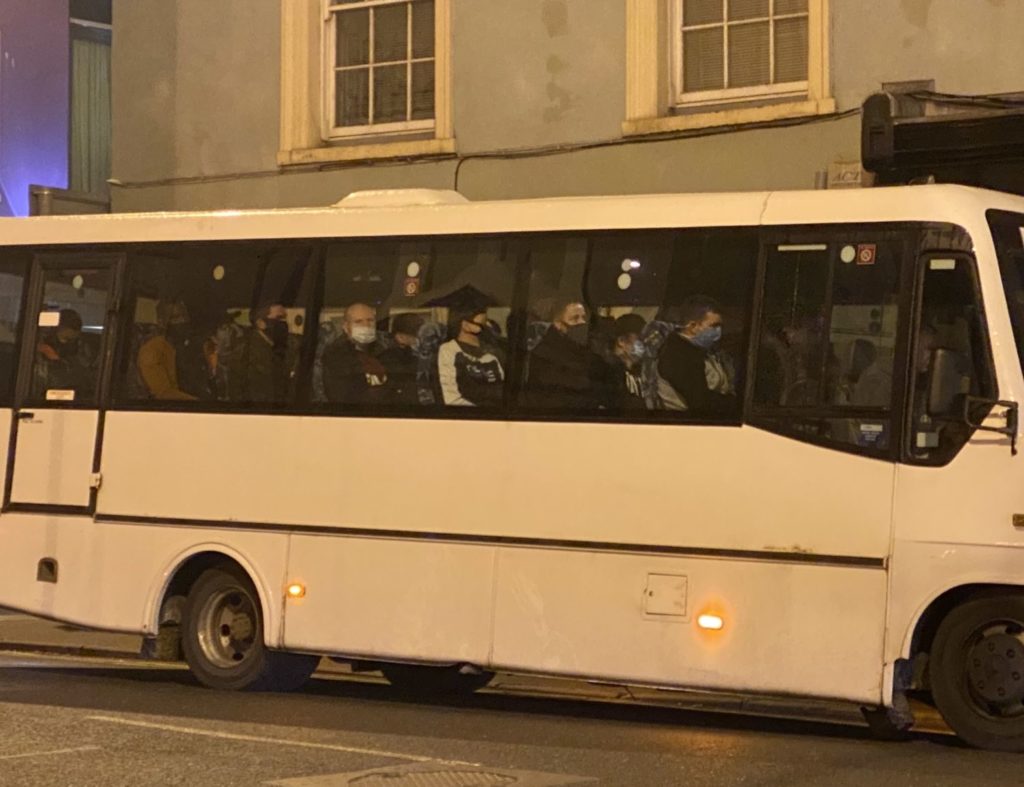 Standing room only on a bus, photographed by the Waterford News & Star at 5.50am last Monday, which was on its way to a local meat plant.

NOT 24 hours after Waterford recorded its highest daily increase in Covid-19 positive cases, two schools in the city – Waterpark College and Our Lady of Mercy Secondary – issued statements to parents informing them that a positive case had been reported in each school.

In a statement issued to the Waterford News & Star, Waterpark College stated that they were informed on Monday (September 14) that a student, “who has been absent for a number of days has tested positive for Covid-19”. The HSE and Public Health assured the school that all appropriate measures were taken in time and “strongly advised” them that there was no need to close the school or send any class group home.

In their statement to parents, Our Lady of Mercy Secondary School said that Public Health had been in touch with them to say that there was a positive case within the school but there was no need to send a class home or close the school. All the close contacts were informed by Public Health and are now self isolating.

Since August 30, Waterford has recorded 72 new cases of Covid 19, 48 of which have come in the last week. In University Hospital Waterford at 11am on Monday, September 14, there were two positive patients on site, one of whom was in ICU, and eight patients were awaiting the results of testing.

With regard to testing, the HSE/South East Community Healthcare (SECH) reconfirmed that there had been a “significant rise in community testing referrals in the last month”. To date, approximately 27,305 tests have been completed at community testing centres in the South East over the last 24 weeks (of which, a total of 7,189 were in Waterford).

On Monday morning (September 14) at 5:50am, the Waterford News & Star photographed a private bus, which was full to capacity, picking up workers en route to a local meat plant. The Waterford News & Star contacted both the bus company and the meat plant but no response was forthcoming. A spokesperson for the Department of Transport told this paper today that the public health advice was to maintain a strict 50% of usual capacity and any bus operator that wasn’t adhering to this advice was “seriously non-compliant with the Government health advice”.

Separately, the Waterford News & Star has repeatedly contacted Dawn Meats to confirm if they have had any positive cases in the last seven days. Despite repeated questions to the plant, they have not furnished this newspaper with an answer.