250 birthday bumps actually as Ludwig Van Beethoven was born at what is now the Beethoven House Museum, Bonnstrasse 20 on December 16th, 1770. While there isn’t any actual record of the date of his birth, the registry of his baptism, in the Catholic Parish of St. Remigius on 17th December 1770 survives, and the custom in the region at the time was to carry out baptism within 24 hours of birth.

Widely regarded as the greatest composer who ever lived, Ludwig van Beethoven dominates a period of musical history as no one else before or since. Rooted in the Classical traditions of Joseph Haydn and Mozart, his art reaches out to encompass the new spirit of humanism and incipient nationalism expressed in the works of Goethe and Friedrich von Schiller, his elder contemporaries in the world of literature; the stringently redefined moral imperatives of Kant; and the ideals of the French Revolution, with its passionate concern for the freedom and dignity of the individual.

‘His personal life was marked by a heroic struggle against encroaching deafness, and some of his most important works were composed during the last 10 years of his life when he was quite unable to hear.’

He revealed more vividly than any of his predecessors the power of music to convey a philosophy of life without the aid of a spoken text; and in certain of his compositions is to be found the strongest assertion of the human will in all music, if not in all art. His personal life was marked by a heroic struggle against encroaching deafness, and some of his most important works were composed during the last 10 years of his life when he was quite unable to hear. In an age that saw the decline of court and church patronage, he not only maintained himself from the sale and publication of his works but also was the first musician to receive a salary with no duties other than to compose how and when he felt inclined.

His father Johann (1740–1792), who worked as a tenor in the Archbishop-Elector of Cologne’s choir and gave keyboard and violin lessons to supplement his income, was his first piano teacher. The regime was harsh and intensive, often reducing the five-year-old Ludwig to tears. There were irregular late-night sessions, with the young Beethoven being dragged from his bed to the keyboard. His musical talent was obvious at a young age. The penniless Johann attempted to copy Leopold Mozart’s successes with his son Wolfgang and daughter Nannerl, in also promoting Ludwig as a child prodigy, claiming that the seven-year-old Beethoven was only six on the posters for his first public performance in March 1778.

In 1780 Beethoven began his studies with Christian Gottlob Neefe, the most important teacher in Bonn. Neefe taught him composition and, in March 1783, Beethoven’s first published work, a set of keyboard variations, along with his first three piano sonatas, appeared.

Critically, Ludwig established friendships with several people who became important friends and wealthy benefactors at this time. Maximilian Franz, the new Elector of Bonn, gave some support to Beethoven and appointed him Court Organist and financed his visit to Vienna in 1792. Count Ferdinand von Waldstein also became a friend and financial supporter during Beethoven’s Bonn period. 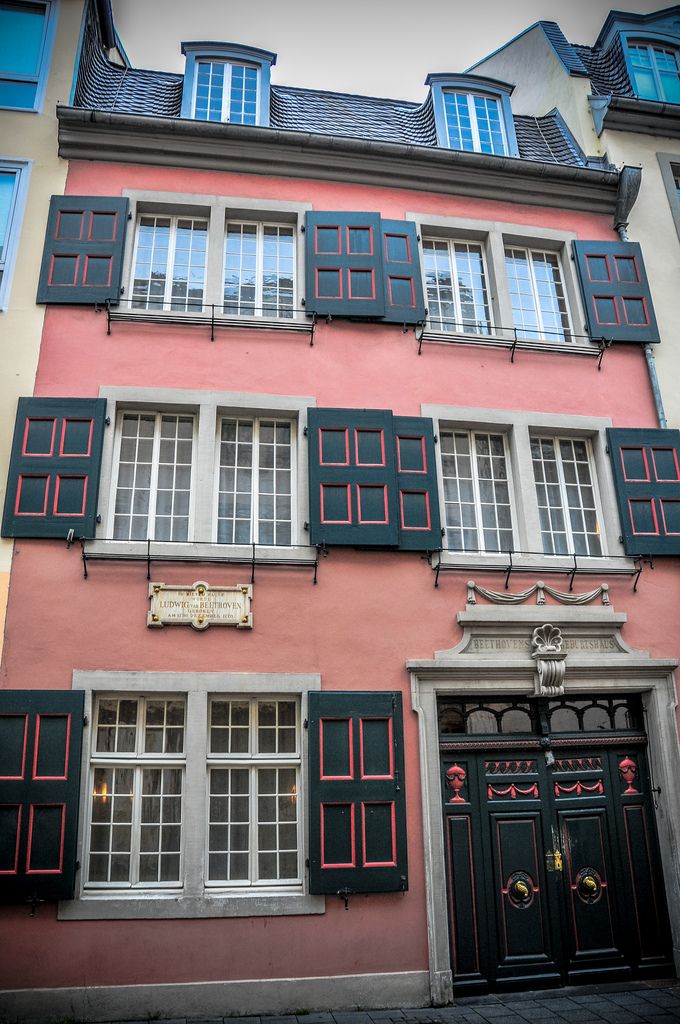 Beethoven’s mother Maria died in 1787 and his father was sacked as a court musician due to his alcoholism, with a court order that half of his pension be paid to Ludwig for the support of the family. Ludwig contributed further to the family’s income by giving piano lessons – which he hated despite falling in love with his pupil Josephine, youngest daughter of an Hungarian Countess – and by playing viola in the court orchestra where he became familiar with a wide variety of operas, including works by Mozart, Gluck and Paisiello.

With the threat of invasion by Napoleon in the air, Beethoven abandoned his home in Bonn and took up residence in Vienna where he studied composition with Hayden. His first public performance in Vienna was in March 1795, where he first performed one of his piano concertos. Shortly after this performance, he published the first of his compositions to which he assigned an opus number, the three piano trios, Opus 1. Beethoven’s profits covered his living expenses for an entire year.

Ludwig was becoming a major player. Beethoven composed his first six string quartets (Op. 18) between 1798 and 1800 and premieres of his First and Second Symphonies in 1800 and 1803, established him as one of the most important of a generation of young composers following Haydn and Mozart.

His business dealings with publishers improved in 1802 when his brother Kaspar began to manage his affairs. Kaspar negotiated higher prices for recently composed works and also began selling some of his earlier unpublished compositions. Sadly, the composer’s deafness also begins at this time. Beethoven believed it was the result of a fit he suffered when arguing with a singer. However, the cause was probably otosclerosis, perhaps accompanied by degeneration of the auditory nerve. Beethoven’s hearing loss did not prevent him from composing music, but it made playing at concerts — an important source of income at this phase of his life — increasingly difficult and also contributed substantially to his social withdrawal. Beethoven could still hear speech and never became totally deaf; in his final years he was still able to distinguish low tones and sudden loud sounds.

His final words were, “Plaudite, amici, comoedia finita est” – ‘Applaud, friends, the comedy is over.’

A View From The Green Room: Tom Crean – Antarctic Explorer