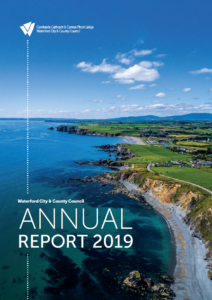 MUCH of the focus of Waterford City & County Council’s Annual Report for 2019 was described as ‘disproportionate to the east of the county’ by An Rinn-based Councillor Conor McGuinness (SF).

Cllr McGuinness, considered a likely running mate for Deputy David Cullinane come the next general election, told the Council’s September meeting that “maybe that reflects the reality, maybe it reflects the perception. But certainly, looking at the report it seems that a disproportionate quantum of Council effort and focus is on the city and the east of the county to the detriment of the west of the county.”

“I think it’s a worrying trend,” he said. “It speaks maybe of a lethargy that’s there and outside of the current global pandemic and perhaps climate change, I think that housing is the biggest domestic issue pressing on our society at the moment and we really need to attend to it. I’ve attended online virtual meetings of the Economic Development and Enterprise SPC which has been chaired effectively, in which decisions have been made. I see no reason why we couldn’t do that for the Housing SPC…so I would just call that we would have more online meetings of the Housing SPC so that we can accomplish the tasks, the very important things that we need to be resolved for the people of Waterford.”

“Are we not allowed to discuss the city?”

Meanwhile, at the close of the Plenary meeting, Cllr Mary Roche (Ind) referred to several city-related issues, including the North Quays, in addition to congratulating Spraoi for its well-received dressing of certain areas of the city centre.

“There are streets in the city that are very animated and very alive and the retailers have really stepped up to the plate with the co-operation of the Council but there are other areas that are completely dead; I’m thinking of areas like Cathedral Square where not only is there no activity day or night but now (as of September 11 at least) every public light in the entire square is out and has been for weeks. In fact, the public lighting in the city is deplorable at the moment.”

City & County Mayor Damien Geoghegan (FG) then interrupted Cllr Roche, suggesting that she should “keep those 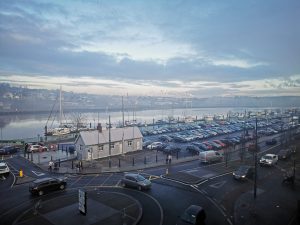 comments for the Metro meeting (where they’d be) more relevant to city issues.”

Mayor Geoghegan disputed Cllr Roche’s claim relating to the meeting’s geographically-related content, to which Cllr Roche replied: “I’ve heard Dungarvan, Ardmore mentioned – are we not allowed discuss the city at all.”

Mayor Geoghegan told Cllr Roche: “You’re discussing it now” before Cllr Roche immediately replied: “I’m quite willing to bring it back to the Metropolitan (meeting) but Mayor, I’m just wondering if you could be as strict with everybody else if you’re going to be this strict about the city?”

The Mayor, in reply, stated: “You appreciate the position we’re in; we’re limited to the amount of time…” before Cllr Roche broke back into the debate, saying: “Mayor, this is actually the first time I’ve raised my hand.” Mayor Geoghegan promptly replied: “And you’re talking about lights being out in parts of Waterford city. I am asking that you would limit those kind of comments and discussions to the Metro meeting, that’s all, that’s all I’m asking. Now continue.” Cllr Roche replied: “It’s okay, Mayor. I’ll leave it.”

In relation to Cllr Roche’s North Quay query, Council Chief Executive Michael Walsh stated: “There’s work ongoing by all parties to the equation. We’re quite hopeful that in terms of the funding that there’ll be a memo from Government in the next two or three weeks. I’d certainly hope before the October meeting to have a final response in terms of our funding application under the URDF – and that’d be a very significant milestone, I think, along the way ahead.”