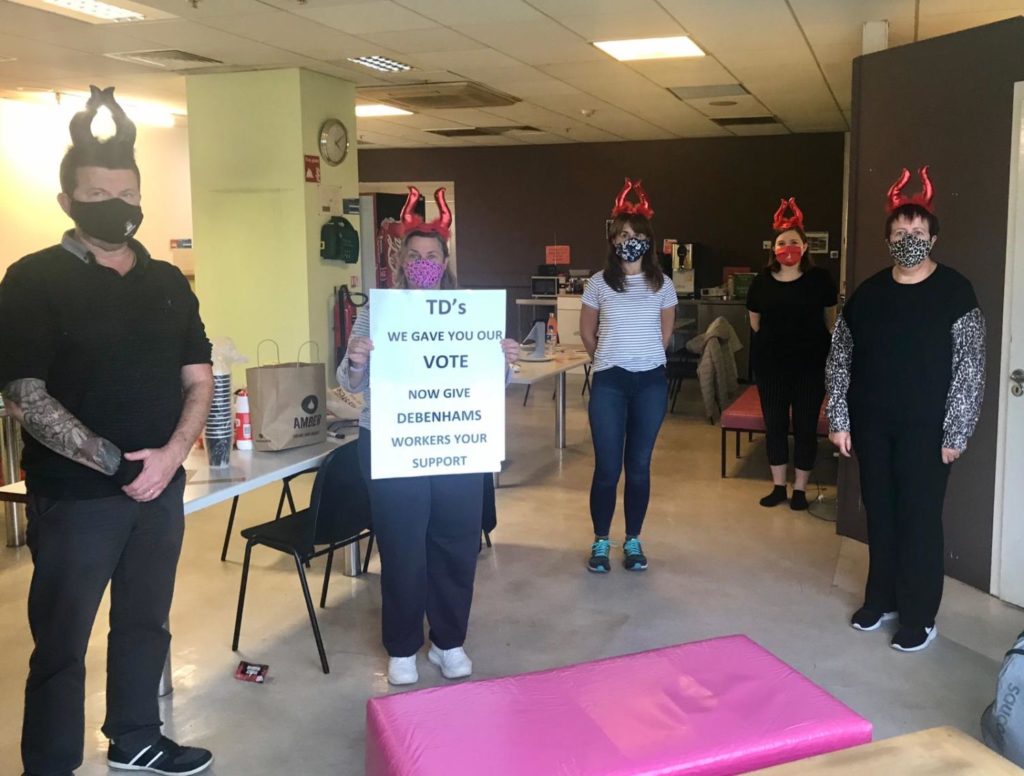 FORMER Debenhams workers in Waterford are now heading into their fourth day of occupation at the closed store in City Square Shopping Centre and 176th day of picketing.

The former workers are calling on the Taoiseach and the Minister for Enterprise, Trade and Employment to issue a concrete timeline for the Duffy-Cahill report implementation to protect workers in the future from finding themselves in a similar situation to the former Debenhams workers.

The five occupiers entered the store at 8am on Monday morning and were initially sleeping on the floor in the canteen before locals donated two blow up beds as well as food and other supplies.

KPMG sent a representative to meet the occupiers on Wednesday afternoon. “They asked us what it would take for us to go. We told them we want KPMG back at the table with the Union and the 11 shop stewards and for the Government to give us a timeline on the Duffy-Cahill report,” ex-worker of 27 years Michelle Gavin said.

Shortly after 9pm on Wednesday evening, KPMG issued a letter to the former workers refuting the claim that the KPMG official would be going back to the company with their demands.
“The KPMG official was simply trying to ascertain when the employees might voluntarily leave the store which would allow us to continue the liquidation process,” the letter read.

Six Gardai entered the premises on Monday and took the names of the occupiers, who declined to give any statement about what the Gardai perceived to be criminal issues.

Shop Steward Michelle Gavin said the company has a “moral duty” to come to a resolution for the workers.

“I gave most of my adult life to the company. My children worked there throughout their college years. They shouldn’t have walked away and not paid us. Maybe legally they can because the Government hasn’t signed the Duffy-Cahill report, but morally they have a duty to us,” she said.

Margaret Sinnott worked for Debenhams for 15 years and felt she had “no choice” but to participate in the occupation.

“I’m a reserved person, I’m usually the one to stand back. My family can’t believe I’ve done this and neither can I. When I saw the occupation in Cork, I said ‘I don’t think I could ever do that’. But you surprise yourself,” she said.

“When it came about, I said ‘I have to do this’. For my own self respect and to not let them get away with what they’ve done to me. Sometimes in your life you have to stand up for yourself. As the days go on, we’re willing to stay here.”

The protest is no longer about any individual worker, Ms Sinnott said. “This is about all workers now. There were evenings when I went home crying, thinking I wouldn’t go back the next day. But you get on with it because I don’t want anyone else to have to stand on the side of the road for six months feeling like no one is listening or that they have to beg for what they worked hard for,” she said.

The support from the public is what’s keeping the women going. “My clothes won’t fit me coming out of here,” Ms Sinnott joked. “Women have come in having baked for us, people outside have given money to buy supplies. We even had a German website get in touch to ask if there was a fund to contribute to.”

The former workers have “no plans to leave soon”.