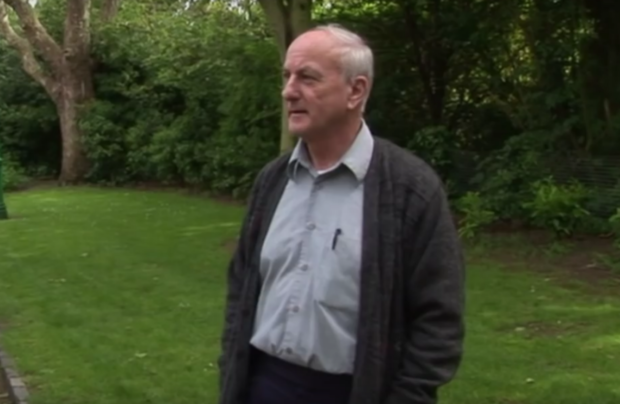 IN a trial that’s been before Waterford Circuit Court the last four weeks, former priest Oliver O’Grady was found guilty this afternoon (Tuesday, October 13) of possession of child pornography whilst he was living at 21 Otteran Place, South Parade, Waterford. It took the jury two hours, 5 minutes to come to their decision.

The jury had previously heard evidence that Mr O’Grady was given a loan of a computer by another tenant of the house and had used it over the course of a number of months for Italian lessons and ‘personal use’. The defence had accepted that whilst using the computer, Oliver O’Grady had searched for images of young boys in underwear, often at the same time as he was searching Roman Catholic websites, for information such as the lyrics to O Holy Night and the Magnificat.

The subject of the child pornography charge – a video of a semi-naked young girl – had been shown to the jury at the commencement of the trial. Defending Mr O’Grady, Sean Rafter BL asked the jury to consider a number of things – mainly that the computer was being used in a common area of the house, which was also frequented by other tenants of 21 Otteran Place. He also said that there was no information available about the video so it could not be known for sure that the girl in the video was under the age of 18. Other images which had been accessed on the computer, such as sexualised images of young boys in underwear and swimwear, were not the subject of the charge because they are not considered ‘unlawful’.

Conor O’Doherty told the jury that computer usage had been consistent with Mr O’Grady, such as his use of a Yahoo email account, which had been used to contact O’Grady’s own solicitor and a Skype account that was linked to the same email address and had Oliver O’Grady’s phone number attached to it. Mr O’Grady was, according to Conor O’Doherty, the person who had been searching for images of young boys, whilst also accessing sites of a Roman Catholic interest. He was, he said, the main user of the computer.

It was the defence’s assertion that on the day that the video in question was downloaded, no other activity had taken place and it wasn’t consistent with other items that Mr O’Grady had downloaded. He also said that it was bizarre to assume that Mr O’Grady would simply hand back the computer to the tenant who loaned it to him, when it contained child pornography – as the prosecution had claimed. Mr Rafter, defending Mr O’Grady, also said that the tenant who loaned Mr O’Grady the computer had “skin in the game” because it was his computer and he had previously been inconsistent with his evidence about when he reported the video to the gardaí.

The case contained a lot of technical evidence relating to the items downloaded on to the computer and required the evidence of two separate computer forensic experts, four different members of An Garda Siochana, and five different civilian witnesses that included the landlord of the house, Mr O’Grady’s Italian teacher, two former tenants of 21 Otteran Place and a friend of the original person who loaned the computer, who had found the video in the first instance.

Mr O’Grady has previously served time for possessing 280,000 images on laptops and hard drives, the majority showing children in sexual poses, as well as more than 1,000 child pornography video files. O’Grady moved into Otteran Place in February 2015 after a “religious family’ recommended him to the landlady, Gabrielle Dalton. In January 2018, Bishop Alphonsus Cullinan circulated a letter to Waterford schools warning them of an “extremely dangerous paedophile” who was living in Waterford City at the time. He named Mr O’Grady and said that he was “actively seeking victims”. Mr O’Grady moved out of Otteran Place shortly after the letter was reported in local and national media.

Mr O’Grady will be sentenced on October 27.