A fire which was set inside the estate

A FRUSTRATED resident of Kill. St. Lawrence in Waterford has hit out against more than a year’s worth of anti-social behaviour and planning issues experienced in the housing estate. In August 2019, resident Bart Zdrojowy, together with residents of the estate, met with local councillors and planning officers to discuss their issues. Since then, at least 13 separate incidents have been noted by residents, with the most recent incident being the distribution of hate mail, which it is believed to be by minors.

The proximity of Kill St. Lawrence to the neighbouring Fairfield Park estate, with the absence of a substantial physical boundary, has seen many entering the estate from outside, from the time of development until now. Residents are calling for a 1.8m concrete block wall to be constructed along the perimeter of the housing estate, in place of the wooden palisade fencing, which is currently present in varying heights. 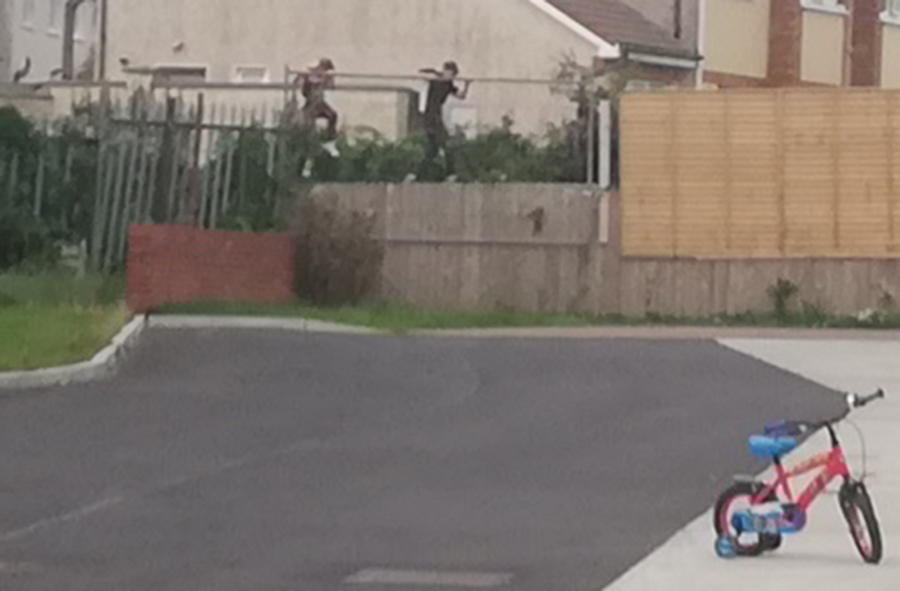 Residents are also calling for clarity on a proposed pedestrian access route, which is currently blocked off with a security fence, allowing for illegal access for antisocial purposes.

In 2019, a bonfire was set in the bushes using wooden fencing and PVC pipes which were obtained illegally from the Fairfield Park development. A unit of the Fire Service attended the bonfire near The Drive, Kill St. Lawrence to extinguish it.

This was followed by deliberate damage to trees in the Kill. St. Lawrence estate, with the minors believed to be responsible said to have left via the fencing dividing the estate from Fairfield Park. Following and preceding these events were high speed scrambler bikes at late hours, stolen property and late night disturbances.

A cohesive approach from the Gardaí has seen a decrease in the presence of scrambler bikes and fires, however the last few months have forced the residents association to regroup their efforts, in a desperate attempt to address the behaviour being experienced.

In March of this year, two separate fires were set near house numbers 114 and 119. These were followed by a large fire in April, which was attended by Waterford Fire Service, near rows 110-114 and 115-118.

In June, a cottage near the entrance to the estate was set on fire twice, with Gardaí and the Waterford Fire Service attending. More recently, the doors and windows of an elderly resident’s home have been banged on, while eggs have been thrown at cars parked in their driveways – the eggs were observed being thrown over the boundary between Fairfield Park and Kill St. Lawrence.

Speaking with the Waterford News & Star, Bart Drojowy, a Polish national who has been living in Ireland for at least 14 years, said he believes some of the correspondence may be zenophobic in nature, with one letter stating, “We don’t want you here.”

Cllr. Frank Quinlan was on site recently with the residents to explore the issues being raised, while Cllr. Eddie Mulligan, who was on site in August 2019, confirmed that the planning department of Waterford Council are examining all options with regard to the boundary of the housing estate. In correspondence to this newspaper, Cllr. Mulligan said, “Planners were again in touch with both developers in relation to establishing who was responsible for removing the hedge and were awaiting evidence to support claims before determining a course of action.”

Residents believe that the natural green border, which once bordered the property before being removed, was a natural deterrent to intruders. The border was replaced with wooden palisade fencing and now an open walkway is being explored as an option to link estates along that road. This is being strongly objected to by residents. It remains unclear why the hedge boundary was removed.