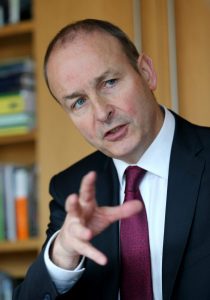 ANY move to a nationwide Level 5 lockdown recommended by the National Public Health Emergency Team (NPHET) appears unlikely to be immediately implemented.

With Taoiseach Micheál Martin currently in Brussels and with no cabinet meeting scheduled for today, the coalition’s three party leaders along with the Ministers for Finance and Public Expenditure will meet tomorrow to discuss NPHET’s recommendation.

But whether an official announcement will be publicly made by Mr Martin before the end of the weekend, as public fears over the nature and consequences of Covid-19 escalate, remains to be seen.

“Obviously this is very serious advice,” said the Taoiseach in Brussels earlier. “It has to be considered and people have to be given clarity around it. There have been meetings this morning. I agree with NPHET in terms of the priorities we all share in protecting the vulnerable and the elderly and making sure children continue to go to school.”

Regarding a potential second national lockdown, Mr Martin continued: “There are enormous economic consequences. We have just had a budget that identifies a significant deficit this year and next year. We moved to Level 3 already and also said to people no visitors to your home. We take advice from NPHET very seriously. This will get good consideration. I don’t want to put a timeline on it. We want to have the situation well documented.”

Earlier, The Irish Times reported that NPHET had recommended Level 5 restrictions to run for a six-week period throughout the State.

“Two sources with knowledge of the recommendation to Government confirmed it had been made following a meeting of the team on Thursday,” the paper stated.

Tanáiste Leo Varadkar believes a second lockdown would prove more problematic than the initial restriction at the outset of the pandemic had proven.

The public, he said, would “want to know what the exit strategy was, what the target was and at what point we would be able to achieve the (lower restrictive level again)…

“A second lockdown will be difficult for people and some businesses might not survive. A lot of people who felt the social isolation in Spring was difficult might find it harder with darker days and the (poorer) weather.”

Social media, unsurprisingly, reacted with a pervading sense of despair to today’s developments with one poster musing: “Not sure how much more people can take of this. Where’s the vaccine?”