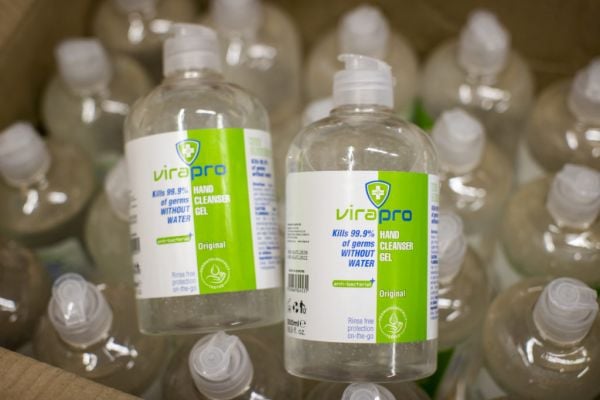 More than one million units of a brand of hand sanitiser no longer authorised for use in Ireland were distributed to health service facilities across the State.

The Virapro-branded hand sanitiser contains methanol rather than ethanol and the Department of Agriculture has advised people to stop using it and the company’s other products.

Inadequate levels of ethanol make the product ineffective and frequent use of sanitiser with methanol can cause nausea, dermatitis, eye irritation, upper respiratory tract irritation and headaches, it said.

A number of schools were forced to close on Friday as a result of the recall. The product had been sent to education centres across the State for use by students and staff.

The Health Service Executive (HSE) on Saturday confirmed that it had taken delivery of more than three million units of ViraPro’s sanitiser for use in health settings. Two million of these were in storage and more than a million have been “issued to health service locations”, it told The Irish Times.

A product recall team has been mobilised and it had “immediately quarantined all stocks currently held in the National PPE Distribution Centres”, a HSE spokeswoman said.

The recall would help to establish “how much product needs to be uplifted and replaced”, she said.

She said there was “ample stock available” in HSE storage to replace the recalled sanitiser.

On Thursday, members of the public were urged not to use the product as it contains methanol rather than ethanol.

On Friday night, the Department of Agriculture said, in the course of the investigation into the hand sanitiser, it emerged that a number of other sanitary products under the Virapro brand were not on its approved list for biocidal products.

“The company concerned has been advised to withdraw all of these products from the market,” said a departmental statement.

“The department is therefore advising, on a precautionary basis, that all sanitary products in the Virapro range should be returned to the supplier.

“Members of the public are advised to stop using these products because they are not authorised for use.”

The department said all products containing biocides were required to have specific information and data on the labels.