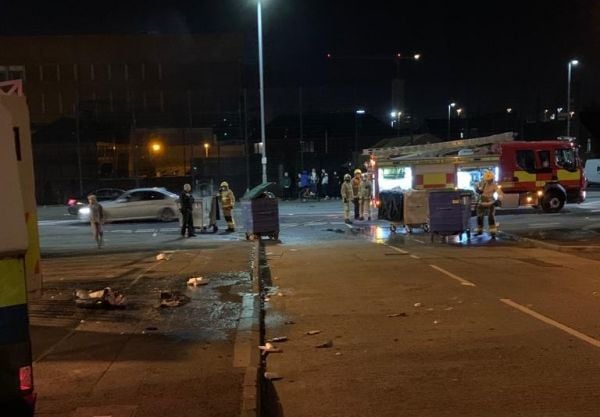 A teenager has been arrested after police and fire crews were attacked with missiles in Belfast.

Police said officers and fire crews were attacked with masonry and other missiles by a group of youths at the junction of North Queen Street and Duncairn Gardens on Friday evening.

Bins were set on fire, roads were blocked, and a nursery school was damaged after fireworks and missiles were thrown on to the road, the PSNI said.

He was released and cautioned following the incident, with police enquiries ongoing.

He was arrested following reports of youths fighting.

Superintendent David Moore said that shortly before 8pm, rival factions were involved in an altercation.

Tonight in New Lodge, a large number of youths showed a total lack of respect for their community. Bins set on fire, roads blocked, Nursery School damaged and Fireworks & missiles thrown out onto the road. NIFRS were also attacked. Footage will be examined to ID those involved. pic.twitter.com/i2EuUcNabx

“Upon arrival of police in Spamount Street, officers had both masonry and other missiles thrown at them by a group of youths. Youths then set large, industrial bins alight in the area to attempt to block the road,” Mr Moore added.

“Northern Ireland Fire and Rescue Service attended the scene and had bricks and bottles thrown at them during the incident.

“Damage was also reported to the grounds of a nearby nursery school by youths involved in the disorder.

“No injuries were reported to personnel in attendance, but damage was caused to police vehicles including wing mirrors and a smashed windscreen.

“It is extremely disappointing that officers had to deal with the actions of individuals who showed a complete disregard for the local community.

“For officers and colleagues from Northern Ireland Fire & Rescue Service to come under attack in trying to keep people safe, means that vital resources are being removed from public use when they could be better utilised elsewhere.

“We will continue to work alongside local representatives and partner agencies, but it is disappointing that some people continue to disregard our repeated warnings.

“Those people who choose to engage in criminal and anti-social behaviour must understand it is unacceptable and must stop. People have a right to live in peace and to feel safe in their communities.

“Parents and guardians have an important obligation to keep young people safe by knowing where they are going and who they are with. Young people must understand the dangers of getting involved in behaviour which could result in injuring themselves, others, or ultimately, a criminal record.”

Police said they are reviewing the CCTV recordings to identify those involved.