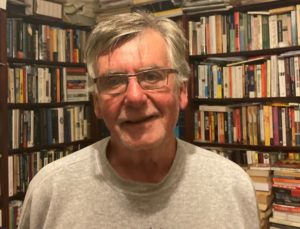 TWO-TIME Mayor of Waterford and former TD Brian Swift has vocalised his frustration with the conduct of US President Donald Trump in a more contemplative manner than most: via poetry.

Speaking to the Waterford News & Star, the ex-Fianna Fáil deputy and retired solicitor said his poem, ‘Lies in Waiting’ wasn’t necessarily a cathartic process but gave voice to his fears for democracy across the Atlantic.

“Of the poems I’ve written, that is the only political one and I don’t intend writing another one,” said Mr Swift, who began writing poetry earlier this year in the wake of some familial encouragement.

“But this man (President Trump) basically goes around telling lies and then he conflates things; some people think he just does that for the sake of it but I think he’s doing it very deliberately and doing so to suit certain vested interests. There’s the Paris Climate Accord, the Trans Pacific Partnership – a deal which economically stabilised the Pacific region economically – and of course the undermining of institutions such as the United Nations and NATO.”

Mr Swift added: “In my view, he is doing his utmost to up-end the international order and I don’t think enough of us are taking all of this seriously enough. I know many people are but just, if you like, from my perspective, as a member of the general public, I don’t think we’re conscious enough of the extent of the damage that this man is doing.”

Ahead of US Presidential Election day on November 3, opinion polling in recent months suggest the incumbent is trailing to Democratic candidate Joe Biden in both the national stakes and in a majority of ‘battleground States’ including Pennsylvania, Wisconsin and Michigan. Does the former Mayor believe Biden’s success to date has been primarily driven by a growing anti-Trump sentiment?

“It certainly appears that way,” said Mr Swift, speaking on Wednesday last. “He appears less likely to win this time around than was the case in 2016 but it’s still entirely possible that he may be re-elected.”

And even if President Trump goes the way both Jimmy Carter and George HW Bush did after serving a single term, Mr Swift doesn’t believe the narrative Trump has whipped up over the past four years will evaporate upon his defeat. This was evidenced in the final couplet of lines in the poem which state: “If you think you can be safe, I still have power to lie in wait.”

Said Brian Swift: “What’s going on with the Supreme Court hearings of (likely future Justice) Amy Coney Barrett and when you compare that to Merrick Garland (proposed by then President Obama but blocked by the Republican Senate majority) more than suggests that there are potential dangers ahead. Now some people will say, ‘sure that’s America, it’s a different country and what goes on there has nothing to do with us’ but this is a very big and powerful country that we’re talking about. It influences world affairs and has traditionally been a necessary counterbalance to dictatorships around the world… but if the democratic philosophy is eroded in America, I feel it makes the rest of us vulnerable. He (Trump) has debased American politics and, as the premise of the poem illustrates, has made lying acceptable. And none of us have benefited from such a shameless philosophy. His contempt for the ordinary citizen has been shocking.”

This is my Order

Which I now proclaim

All statements are either lies or

They will be cleverly planted

To hurt and maim

The proud and free.

Whose thought is pure

Whose acts are faithful.

and spite the truth

To implicate the innocent

To pardon the guilty

To believe the enemy

To demean the hero.

To pick at honour

With the tools of fear

To use the crowd for cover

And build the walls of terror.

To reward the rich

To punish the poor

To separate the families

And cage the children.

To lead the grubby old party

Along the path of Cain

And from sea to shining sea

To betray the people.

To renounce all values

To promote the supine

To undermine the strong.

To cheat and defame

To accept no blame

To incite and inflame

To deny and run away.

To have no shame

To weaken and strain

The ties that bind us

To ourselves and to our country.

I profess my ignorance

I proclaim my contempt

For all predecessors and others

In my deals I am revealed

I am the Grabber-in Chief

America dies while I play life

My people struggle through toil and strife.

I talk but do not read or listen

I know without thought or study

This will always be

I am the White House resident

When I was needed most.

I am the President of privilege and wealth

I am not the President of Science and Health

I am the President of death and chaos

I am not the President of principle and change.

I flashed the Good Book outside a church

But left my people in the lurch

I am the President of toxic dumping

Of vile name-calling and Bible-thumping.

I mock at service

I sneer at truth

I do not care or love or succour

I am the colour-coded lying President.

I am the tawdry President

Who sullies all he surveys

Who turned the shining city

Into a bullied polarity.

And if you think I’m nearly done

I still have friends who will subvert

If you think you can be safe

I still have power to lie in wait.