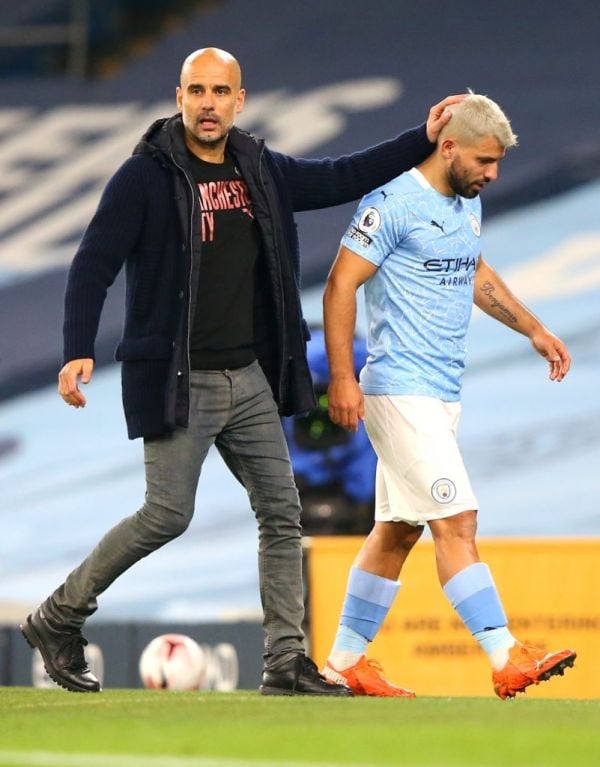 Pep Guardiola fears this season could come down to the survival of the fittest after Sergio Aguero dealt Manchester City a fresh injury blow.

Aguero, City’s record goalscorer, could be out for another month after suffering a muscular injury in Saturday’s game at West Ham.

The Argentinian was playing just his third match since recovering from the knee operation he had in June.

City had been trying to ease him back into action but he encountered a problem in the first half of the 1-1 draw at the London Stadium and was withdrawn at the interval.

To compound matters, Fernandinho, Benjamin Mendy and Nathan Ake also miss out at the Stade Velodrome while Aymeric Laporte and Kevin De Bruyne have only just returned to fitness in a difficult start to the season.

Manager Guardiola recognises, however, City are not the only club to struggle due to the nature of this season’s pandemic-affected calendar.

“We don’t have time to practise much. Everyone got the statistics – in the Premier League, we have 47 per cent more muscular injuries than the same period last season. It’s not just about City, it’s about everyone.

With hindsight, Guardiola admits it may have been wise to bring in another striker over the summer but the club spent the bulk of their transfer budget on defensive pair Ruben Dias and Ake.

Guardiola said: “We considered it, we thought about it another type of striker but we could not.

“If you decide to buy a striker, it has to be a striker in the league of Gabriel and Sergio, but we cannot afford it. That is the reality.”

Aguero seems unlikely to be available for City’s clash against champions Liverpool on November 8.

“It depends on the injury,” Guardiola said. “When it is minimum it will be 10-15 days. If it is longer it will be three weeks to a month. I don’t know.”

While City’s form in the Premier League has been mixed, they began in the Champions League with a 3-1 win over Porto. Victory over a Marseille side beaten in their opener by Olympiacos could see them establish an early position of strength in the group.

The French side are managed by Andre Villas-Boas, the former Chelsea and Tottenham boss.

Guardiola said: “He is an experienced manager, he knows perfectly the Premier League.

“He’s a young manager who’s had success and he is doing a good job here in Marseille.”

Simone Biles hints she may withdraw from Tokyo Olympic Games