Time Out with Timmy: Praising a genial globetrotter 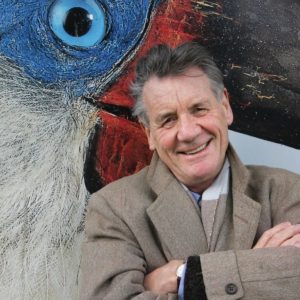 AS things currently stand, it’s highly likely that a trip abroad is not an option for many of us. With current circumstances being as they are, I’d seriously have little or no interest in going anywhere anyway.

For starters, where would I go?  Everyplace is pretty much experiencing what we are and do I really want to wear a mask on a plane for any length of time?  Travel will be available to us again, just not right now.

Over the years, I’ve been blessed with the most amazing holidays and trips and have visited some fantastic spots around the world. Even if I never travelled again, I’d have to be grateful for the story thus far.

While I wait for the next real-life adventure though, I’m content to view the world through the eyes of intrepid travellers like Michael Palin (pictured) on TV. These are great programmes and are providing a real escape at present.

Some years ago, I got stuck into Palin’s series ‘Pole To Pole’, a wonderful insight into the joys and hardships of world travel. However, not everyone who presents a telly travel show passes the Timmy test. Palin, I have to say is outstanding and in a different class.

Known to many as one of the comic geniuses of Monty Python and star of a number of movies, the genial son of Sheffield, England has a presence that just lights up the screen.

His communication skills and good old-fashioned rapport with his interviewees and companions on his journeys are a delight to behold. Someone once said the secret to being a good interviewer or presenter was to try to be interested rather than interesting.

There’s a lovely sense of fun in the escapades he finds himself in the throes of and he’s always been game for a laugh and not afraid to appear a little silly at times.

In one series, I remember him getting a street massage on his first day in China. He was well and truly manipulated by the masseur and upon completion, Michael turned to the camera and expressed how marvellous he felt and rather amusingly added: “with only a few broken bones”.

Sadly, I didn’t get the opportunity to attend his talk at the Immrama Travel Writers Festival in Lismore back in the noughties. I’d imagine he was most engaging.

In 1994, Palin focused on Ireland in a show given the title “Derry to Kerry”. His mission was to trace his ancestry and discover what he could about his great grandmother Brita Gallagher who left Donegal during the Famine and settled in New Jersey.

The new series, ‘Michael Palin: Travels of a Lifetime’, currently on BBC telly reflects on his many shows and gleans from his extensively documented diaries.

“Travelling woke up my senses and emotions and showed me a whole new way of life, so I never noticed the male menopause,” he claims, offering hope for any of us who haven’t hit that particular uninviting wall just yet.

According to Mr Palin, smart phones and the internet have made the task of sorting our travel arrangements simpler, but he claims it’s made going on trips a lot more methodical and “less a series of accidental adventures.” His most memorable encounter apparently was with Tibet’s spiritual leader, the Dalai Lama, someone he found very inspirational.

Of course, it’s not always fun and games when you are gallivanting around the globe and there are problems of all sorts with missing sailing deadlines and rail times being par for the course.  Then there are the terrors of those annoying, if not life threatening, illnesses to contend with.  He recalls when altitude sickness “wiped me out on the Annapurna trail”, and dodgy camel liver had him scrambling for a loo in the desert. Now that’s something I personally would prefer to avoid – but it’s all part of the process of being a world traveller I suppose.

Michael is now 77 and has thankfully had some time to kick back recently what with the Covid restrictions and all.

In fact, he says his diary is blank for the next month or so, an unusual occurrence for such an in-demand personality.  He’s had a more profound reason though to take things a bit easier and after a heart operation last year, he reckons it’s impressed upon him that he’s a mere mortal after all and has to pull back in making excessive demands on his body.

He underwent surgery to fix a ‘leaky mitral valve’ after he was advised by doctors to have it repaired. A lifelong running buff, he’s now replaced it with long walks instead, something he finds very therapeutic.

In these times of lockdown, it’s probably as close to travel as many of us will get for the moment but what a magnificent way to be treated to the splendours and less salubrious aspects of the world around us.

Watching Michael be our guide as he explores the planet, you can’t help but be envious of some of the things he gets to experience firsthand, but then on the flip side, there are those gruelling train journeys to endure too, not to mention delicate tummy issues.

Still, it’s a massive thumbs up to Michael and his crew who really have opened up and given us a glimpse in to the incredible sights and customs of so many of our fellow humans.  All done with refreshing humour and, as a broadcaster, I particularly find the programmes excellently and professionally narrated as well.

If you’ve not yet had the occasion to enjoy these by now legendary escapades, allow yourself the joy of uncovering these historic telly moments and do yourself a very great favour and give it a whirl.

Continued good health and fortune to him and I wouldn’t be surprised if he dares venture forth again to provide more scintillating fun, if even closer to home. I sincerely hope he’s not put his passport away just yet.