A View from the Green Room: Ol’ Blue Eyes was here 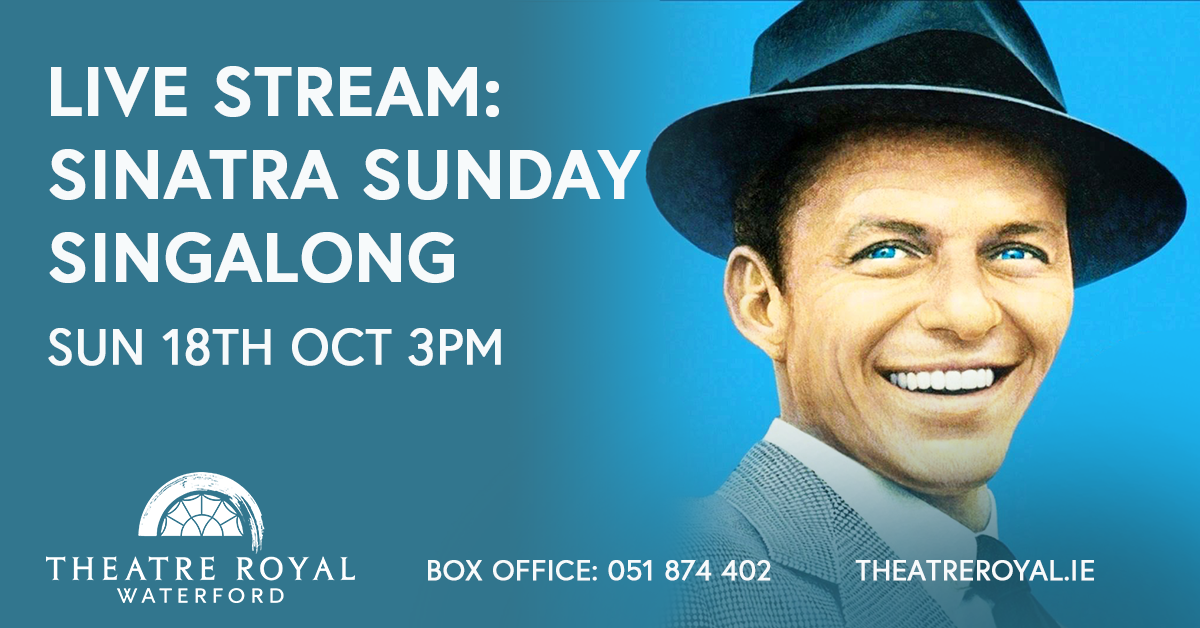 Judging by the number of requests at the end of the show, this online production is still hitting its target audience.

It’s a simple and very effective story-telling frame with the excellent Alf McCarthy as a know-all New York bartender telling the story of Frank Sinatra’s career.

Alf doesn’t just simply tell the story. He uses it and crafts it and makes it into a dramatic journey.  The story is interspersed with songs from singers Linda Kenny and Damian Smith that really capture the mood of the standout numbers such as ‘Come fly with me…When somebody needs you…Leroy Brown…Bewitched, Bothered and Bewildered…’ and so on.

The string of massive hits is endless. Sinatra sold over 150 million records during his career and this production could easily produce a sequel.

Sinatra began his career in the swing era as lead singer with the Frank Dorsey band at a generous wage of $125 per week.

He modelled his singing style on Dorsey’s trombone player because he felt that one Bing Crosby crooner was more than enough. Radio shows boosted his popularity with a new teenage generation of adoring fans. When he went solo in 1943, 30,000 screaming bobbysoxers turned up for the first concert whose bright blue eyes earned him the popular nickname ‘Ol’ Blue Eyes’.

By 1945, Sinatra had it all. He was the number one pop star in America with a family and two daughters. Yet, somehow, it all went wrong. A picture of Sinatra the bully emerged. Stories began to circulate of extra-marital affairs, street-brawls with reporters and connections to racketeers and mobsters.

His marriage to Nancy Barbato ended in 1951. His fans began to desert him and radio sponsors dumped him. Another marriage to Ava Gardner also ended in divorce. Sinatra had reached rock-bottom.

However, Frankie’s ability to re-invent himself was his saving grace. He played the part of Pvt Angelo Maggio for a measly $8,000 in Fred Zinneman’s ‘From Here to Eternity’ which grossed $90 million at the box-office.

The Frank Sinatra Television Show began on ABC in 1950, and he continued to make appearances on television throughout the 1950s and 1960s.

Sinatra was also heavily involved with politics from the mid-1940s, and actively campaigned for presidents such as Franklin Delano Roosevelt, Harry S Truman, Ronald Reagan and John F Kennedy.  However, the Kennedys cut Sinatra adrift when he was investigated by the FBI for his alleged relationship with the Mafia with whom he was frequently pictured.

The fifties saw the introduction of the LP – the long-playing concept album – and, with Nelson Riddle as Musical Director on board, Sinatra had a string of No. 1 hits in the Long Playing Record lists. ‘Songs for Young Lovers…Swing Easy…In the wee small hours…From this moment on…’ established Sinatra as an icon of modern music.

Narrator/barman Alf McCarthy rattled off the breath of Sinatra’s achievements but doesn’t disguise the warts either.

It was an extraordinary career that produced 58 movies, a recording catalogue that runs to some four pages, 150 million records sold, fortunes that were made and lost, a nature that was generous to some and cruel to others in a life that was lived to the full.

Sinatra’s greatest gift came in interpreting songs and no one succeeded in nailing the core of a number like Old Blue Eyes.

#YourFitness: Stay positive, we are almost there!

GREEN FINGERS: Unforgettable moments in and out of the garden