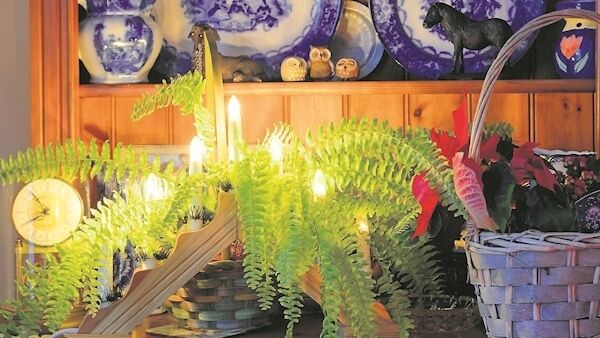 OUR homes have gradually become warmer and drier and, while good for people, it is not the best situation for houseplants which, like it more humid ( steamy, moist) but, there are ways around this and, that is with choosing newer dry tolerant plants and also, giving it moisture by way of hand misting in the home.

Alternative care: You could give your houseplants an occasional moisture treatment by putting them in a bath or shower, give them a decent overall spray and, when dry again put them back into position. Some homeowners do the same but take them outdoors on a dull summer’s day and return them inside later in the evening. We are so busy in the summer months that we transfer out houseplants into a shade tunnel in late April and leave them there until around now when they are returned to the house.

Sea change: Not that long ago the selection of houseplants was limited and within that, there were many that would have needed a genius to get them to flower again (e.g. Anthurium), let alone keep them alive (e.g. Codiaeum) or were a potential health hazard ( e.g. Dieffenbachia). Fortunately, all those negatives have disappeared and been replaced with a huge range of easy to look after houseplants.

Urban jungle: Houseplants, because of their nature have originated in warmer climates and are typically referred to as tropical plants and, it is from these that the new selections have been made. There is a huge boom in houseplants and, where before it might be a few dotted around the house it is not unusual to have many more now up to those whose homes have become an Urban Jungle. I know of quite a few people who have 30 or more house plants in their home and one family member has 100 and room for more!

Selection: There are too many houseplants to choose from so I will make a few suggestions and, as common names can be confusing and relate to a few different plants I am using the scientific name. As a guidance I will list ten of our most popular houseplants and they are: Aloe, Cactus, Calathea, Ceropegia, Ferns, Fatzia, Ficus, Maranta, Pilea and Sansevieria.  Next, I will list another ten that are really easy to grow but not already listed above and they are:-Begonia rex, Chlorophytum, Dracaena, Hedera, Monstera, Philodendron, Rhaphidophora, Schefflera, Spathiphyllum and Yucca. Lastly, I will mention some of the newer selections which are distinct and they are: Aeschynanthus lobbianus, Aglaonema ‘Crete’, Begonia ‘Polkadots’, Ficus ‘Belize’, Monstera ‘Monkey Leaf’, Sanguinea ‘Tristar’ and Sanseveria ‘Golden Hahnii’ and ‘Black Coral’. Now you have 28 houseplants to look at, many of which have horrendous names which are almost impossible to pronounce but, take your time and you will be on the right track.

Take care: The historical cause of houseplant failure is overwatering and that is still the case. Our practice is to water and then let dry out so, it could be weeks or more until another watering is needed. Water more frequently in the summer and give a feed between Easter and August.  If in doubt a safely value is to mist over the plants and this keeps plants alive.

Feeding small wild birds is a two-way trade as initially, the aim was to help them get though the tougher winter months but, it was soon discovered that there was a huge pleasure in watching them eat and interact, all from the comfort of being indoors. We set up our feeders around now and keep them topped up with a variety of food until March, when we gradually ease off in the food supply until the feeders are taken away in late April. To attract the greatest variety of small birds we have a mainstay of peanuts, wildbird seed, niger and fatballs but, add occasional other foods such as pieces of apple, mealworms and crumbs from the kitchen.

On The Spot: Kalyn Sheehan

Out and About in Carbally

Green Fingers: The magical spell of some flowers