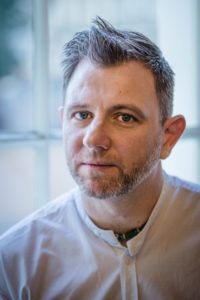 BRIAN Conaghan was born and raised in the Scottish town of Coatbridge but now lives in Dublin. He has a Master of Letters in Creative Writing from the University of Glasgow.

For many years Brian worked as a teacher and taught in Scotland, Italy and Ireland. His first YA (Young Adult) novel for Bloomsbury – ‘When Mr Dog Bites’ – was shortlisted for the 2015 Carnegie Medal, and his second, ‘The Bombs That Brought Us Together’, won the 2016 Costa Children’s Book Award. ‘We Come Apart’, a verse novel co-authored with Carnegie Medal winner Sarah Crossan, won the 2018 UKLA Book Award, and his fourth novel, ‘The Weight of a Thousand Feathers’, won the 2018 Irish Book Award for Teen & Young Adult Book of the Year.

His latest YA title The M Word deals with grief and healing from the perspective of a 17-year-old ‘girrul’ – as his rich and attractive Scottish accent enunciates – and young Waterford writer Libby Marchant kicks off the interview with a quizzical “how come…how does a mature man get into the head of a 17-year-old girl?”

Brian’s answers go right to the heart of all Libby’s excellent questions. His 17-year-old Maggie is an amalgam of many young people he met while teaching. And while gender is specific, emotion isn’t and is in everyone’s DNA.

Anger and angst, hope and happiness, grá and grief is owned by everyone and Maggie’s problem is that, as a 17-year-old that’s not too easy to get along with, she’s not able to articulate her emotions. Or, more importantly, explain them to herself. And that seems to be the core of an obviously compelling character.

Marchant’s questions energise the conversation. “How did you get into writing?” asks the wannabee writer Libby who is already making her name in young adult writing. It somehow just seemed “a natural progression” for the Dublin-based Scot.

“Have you any advice for young writers?” quizzes Libby. For an author who answers initially with “not really”, the engaging Conaghan has a lot of excellent advice for all would-be authors. “Endurance,” says he, “write it and stay at it and finish it…writing is an endurance test…practice your craft like a juggler practices his…accept your mistakes…make it your daily routine.”

Libby doesn’t shy away from the hard questions. “Does ego help?” says she. “No,” says he, humbly, “because ego will always let you down and some people are better writers. Rejections can be crushing. My first three books were all rejected but I persevered”.

“What’s the process,” asks Marchant, “between composition and publication?” Brian explains in simple yet telling detail the process; sharing ideas and stages I hadn’t even thought about.

“Does criticism hurt?” asks a wary Libby. “Not any more” comes the author’s voice of experience. This writer has been around the block, welcomes the constructive kind and is probably inured to harsh criticism at this stage. I’m guessing that he doesn’t have much time for critics that don’t put in the hard yards and can be intensely personal in their columns.

And with that Libby wraps up a very entertaining and interesting conversation with her author-guest Brian Conaghan.

#YourFitness: Stay positive, we are almost there!

GREEN FINGERS: Unforgettable moments in and out of the garden