Editorial: A win for democracy 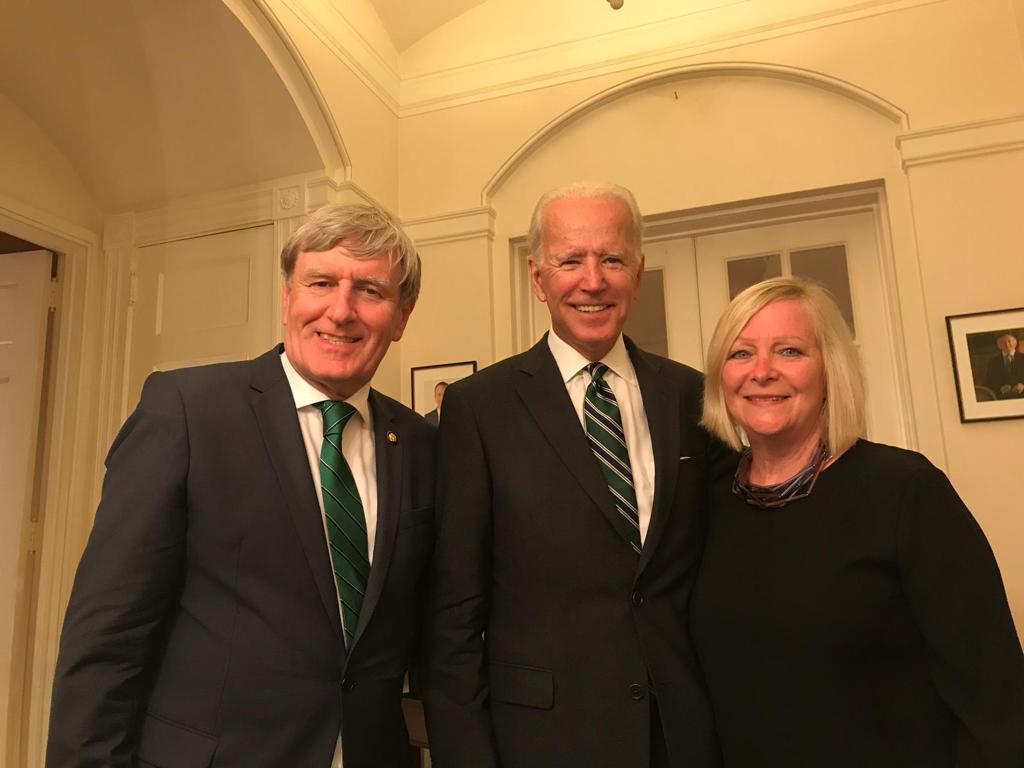 President-elect Joe Biden pictured with Ireland’s Ambassador to the U.S., Waterford man Dan Mulhall and his wife Greta, at their residence in Washington.

DEMOCRACY is only as strong and healthy as we, the people, keep it. And the only true way of keeping democracy healthy is to vote. The huge turnout to elect Joe Biden as President in the U.S. is a clarion call for decency, honour and truth.

The fact that Donald Trump achieved the second highest vote of all time, bettered only by the man who defeated him, shows just how close America came to experiencing another four years of the Trump administration. But it was the common purpose of those who could not espouse such a role model in the top political position in the world that brought this election Biden’s way.

The campaign for democrat Joe Biden saw even republicans cross the party divide to take a stand against Trump’s unacceptable style of politics. It is why, as we went to print last night, the state of Arizona – the home of the late and hugely respected John McCain – was all but set to flip Biden’s way.

Whether Joe Biden will provide the success story America very much yearns for is another day’s work, and a story that will be told in four years time. But sometimes the devil you know is definitely and irrefutably not better.

‘Freedom of expression is a delicate freedom that, in America, Trump weaponised – slandering and casting doubt over any person or organisation or movement that he disagreed with’

Trump’s dramatic fall from grace over the last few days – with incessant Tweets falsely decrying fraudulent votes and fictional allegations that the election was ‘stolen’, and an incredibly unstatesmanlike refusal to concede – further underlined the true character of the man who had been at the helm of one of the world’s most important political portfolios.

Countless candidates in the past, both democrat and republican, including former sitting presidents, have conceded lost American presidential elections with dignity, and pledged unity for the sake of the entire country. It was something taken for granted until this week put the spotlight on the significance and importance of the concession speech.

Many breathed a silent, deep sigh of relief this week, in particular those who have felt vulnerable due to the more irresponsible actions – mainly words – of outgoing President Trump.

Freedom of expression is enshrined in our Irish constitution – but not to the extent that its abuse is permitted. It is a delicate freedom that, in America, Trump weaponised very effectively – slandering and casting doubt over any person or organisation or movement that he disagreed with. He went further, inciting hatred, grotesquely abusing the power of influence that he knew he wielded.

His reasons were manifold, but mainly were driven by a desire to always steer the narrative to his own ends when it came to media scrutiny, injustices against black people, gun crime, immigration etc.

And his use of Twitter and social media to such an end was an incredibly effective propaganda machine.

After the election a video went viral of a journalist being asked by a Trump supporter if he was ‘fake news’. While it was not elegant, the frustrated journalist turned around and told the man, in no uncertain terms, where to go. While the media industry is not infallible, it is a proud and incredibly hard working body of professionals – including those in the United States. For four years their reliability and expertise in seeking out the truth has been constantly disparaged and ridiculed by the President of the United States of America. Enduring such a relentless barrage of unfair and sinister criticism – always to Trump’s own ends – undermines the very nature of the importance of holding power to account.

Joe Biden has a tremendously difficult job of work ahead, but the American people have given him the opportunity and mandate to do it. Just as he’s the type of person to roll up his sleeves and get stuck in, so many more who were hindered by Donald Trump will have a renewed sense of purpose in their work this week. Journalists, for one, will also be rolling up their sleeves – and don’t expect they’ll give Biden an easy ride. They are, and always will be, on the side of truth and justice.

International Women’s Day 2021: Women of Worth