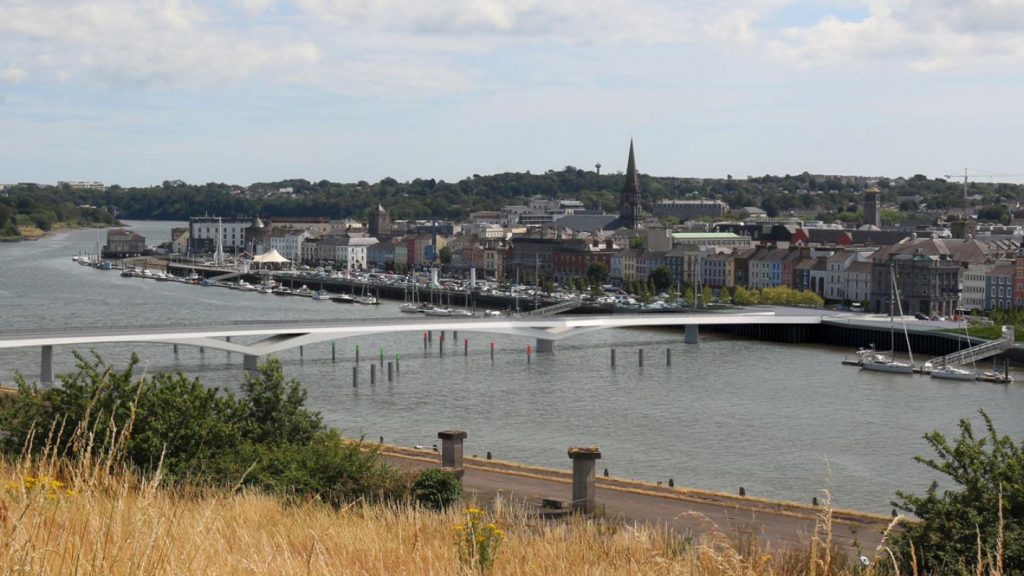 The Sustainable Transport Bridge will link the North and South Quays and provide enhanced linkages into and out of the city centre.

WE are all agog to hear that Housing Minister Darragh O’Brien will travel to Waterford next Tuesday, to visit the North Quays site. Minister of State Mary Butler says the meeting will be a “positive development for the project” as a memo is to be circulated to government with plans for the North Quays before Tuesday’s cabinet meeting. Ms Butler says, “I am positive that the minister is not coming just for a walk.”

Minister O’Brien will meet the council CEO to discuss housing and budgetary matters in relation to local authority budgets. He is circulating a memo in advance to the cabinet meeting on Tuesday. It will be deeply ironic, given the trials and tribulations of the project over the years, if a Fianna Fáil minister comes and announces substantial funding for the project. A lot of good has been taken out of the project and deep damage done to Waterford confidence, by unconscionable delay from government.

Waterford is so used to government ministers arriving with hands hanging, puffing us with fine words or empty promises and then heading down to Cork to dispense huge largesse that there will be genuine surprise if this visit turns out differently. What we don’t need to hear, given the government’s announcement last week that a revised National Capital Plan will be published next year to run until 2030, is a vague assurance the “North Quays will be part of that plan”. She and we will hope for a positive outcome. Show us the money!

‘In recent years the 24/7 campaign has consumed much of the city’s political efforts. There are still so many issues which need attention in Waterford aside from the North Quays’

Capital spending of any kind is welcome in Waterford. The past decade, despite regular protestations from the Fine Gael side, has been unkind to Waterford. Our reporter Darren Skelton received a well-deserved national media award for his UHW mortuary story, which exemplified our situation. A facility recognised as substandard in 2002, prioritised in 2010, planning permission in 2015, was still unbuilt in 2019, yet Taoiseach Varadkar sought to discredit local pathologists who complained of dead bodies and leaking bodily fluids on the existing mortuary floor when he came here last year. A national wave of revulsion forced an immediate change of mind. The mortuary is now being built. The second cath lab, given the go ahead two years ago, is being dragged through an interminable tender process by the HSE. We may see a start on the facility in 2021, but the delays brought to this project by the HSE and three Fine Gael ministers for health, have disgracefully undermined cardiology services at UHW. The long arm of Cork political foreign policy is always evident.

Many people (this writer included) would swap the north quays for proper university designation. That would, on its own, ensure the North Quays would be developed anyway, while the opposite is not true at all. Waterford is being fobbed off with Tech Uni designation, despite being the only city in the country without a university. Fine Gael has, since 2008, evaded their electoral promises and through chronic underfunding, undermined WIT at almost every turn. It is clear in the recent funding announcements that there is a huge government/ political/ Fine Gael/ HEA effort to big up IT Carlow and suppress WIT. These funding announcements also make it very clear that the TU process will not produce a real university in our region.

Sadly, but not unexpectedly, WIT is getting no support from our own Oireachtas members who are literally forcing this TU merger. Mary Butler, David Cullinane, Marc O’Cathasaigh and John Cummins all push the “only game in town” mantra. Whatever hope there is for TUSE, if the manure hits the fan and the HQ is not in Waterford, what excuses will we then hear? None of them will upset the applecart even though a shameful humiliation of Waterford city, which has fought for university designation for almost 100 years, will happen before their eyes. Party loyalty! “I always voted for my party’s call and never thought of thinking for myself at all, I thought so little they rewarded me by” …what exactly? None of their parties will give any guarantee that the TU (such as it is) HQ would be in Waterford. Capital spending is being sloshed around Carlow IT like a drug while not a cent has been spent on teaching space at WIT since 2005. A huge effort is being made to convince people and our TDs have bought it, that a TUSE between Carlow IT and WIT is a merger of equals. The settlement being hinted at is the TUSE HQ in Kilkenny being the set off for state North Quays funding!

The recent Sunday Times ranking of universities and Institutes of Technology lists WIT as eighth amongst the overall universities and IoTs. Carlow IT is ranked last at 19th. The Sunday Times article is unambiguous. Carlow IT has 3,794 undergraduate students, 660 post graduate, 264 staff and €3.5m annual research income. WIT has 6,198 undergraduates, 436 post graduate, 485 teaching staff and annual research income of €16.4m. Yet the Dept. of Further Education (Minister Simon Harris, Fine Gael in charge) and the HEA persist in pushing the TUSE as a merger of equals. It is of no little interest that the Sunday Times says the “Munster TU (due on 1st January) is likely to be vying for top spot among future TUs, while the TUSE, formed from the merger of WIT and Carlow IT, at least early on, is unlikely to reach a rank as high as WIT has consistently achieved.”

Waterford faces a situation where the current level of third level education on offer in the city and easily available to Wexford and Kilkenny and Tipperary, is likely to be worse than what we currently have. Courses and facilities may be hacked out of WIT and spread margarine like around a region desperate for stand-alone small facilities in country towns, even while knowing that these do not work. We will not alone be unable to compete with the existing universities, but will hardly be able to compete with any of the existing institutes of technology after they rebrand as Tech Unis.

This “get back in your box” stratagem is being brought to you by Fine Gael, Fianna Fáil and the Green Party with the assistance of Sinn Fein. Waterford city will be set back two generations because of unilateral Fine Gael support for a town 50 minutes from six universities in Dublin with which its Institute of Technology cannot compete. Waterford city must be diminished so that Fine Gael policy triumphs across the South East county town network. Our Chamber of Commerce, ignorant of the realities but transfixed by the TUSE name, are active partners in this awful process. They can stand again and watch as courses and students are hived off to Wexford and Kilkenny just as our city and county VEC HQs were transferred to Wexford.

In the coming months we must hope that the Tom Boland merger process collapses. WIT and Waterford should stand alone as Limerick did in 1970 when offered an RTC. They refused to accept it and ended up with a National Institute of Higher Education (NIHE) which was transformed into a university in 1985. It is interesting that WIT, with independent university designation, would be more advanced than NIHE Limerick, Dublin and NUI Maynooth were at the times of their elevation, yet no one in politics or business in Waterford addresses very real questions; the location of the HQ, seeking capital resourcing on par with other regions, or new disciplines like medicine and teaching with proper university (as distinct from Institute of Technology) funding. None of these issues can be addressed without our Oireachtas members demanding for WIT and the Waterford city region.

In recent years the 24/7 campaign has consumed much of the city’s political efforts. There are still so many issues which need attention in Waterford aside from the North Quays that one wonders will it be different this time? Will commercial and political interests in the city and region stand aside as WIT is academically destroyed to suit the Fine Gael party and Cork political, medical and commercial interests?