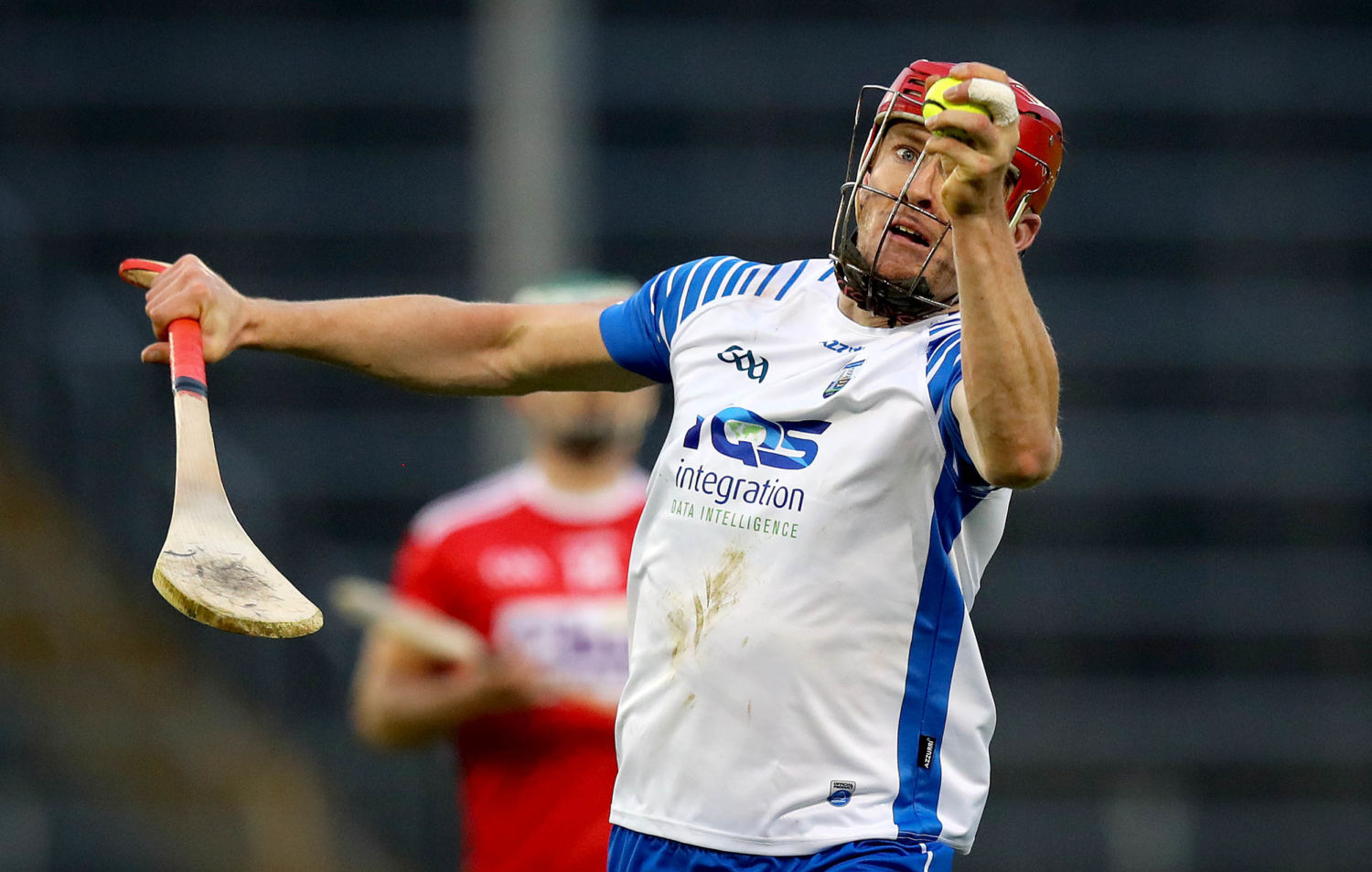 Centre-back Tadhg de Burca gave an exhibition against Cork the last day and the Déise will need another big performance from the Clashmore-Kinsalebeg man on Sunday. Photos: Inpho.

It was the first Sunday in March this year when Limerick and Waterford met in the Allianz National Hurling League at the LIT Gaelic Ground. Both teams had already qualified for the knockout stages of the League and the only issue to be decided was which would top the group and secure the automatic semi-final seeding alongside Group B leaders Clare. A near full strength Limerick came out on top against a largely experimental Waterford fifteen on a score of 1-21 to 1-17 which was a big improvement on the previous three meetings between the teams over the preceding two years.

A league quarter-final against Kilkenny and a possible run in the League loomed in the run up to the championship and a home game against Tipperary amidst growing optimism but then came the pandemic and all changed utterly. No one could have imagined then that Waterford and Limerick would be facing each other in a Munster Final in an empty Semple Stadium in mid-November. Indeed, throughout the Summer months it looked, at times, like there would be no championship at all but here we are if only under the most stringent conditions. 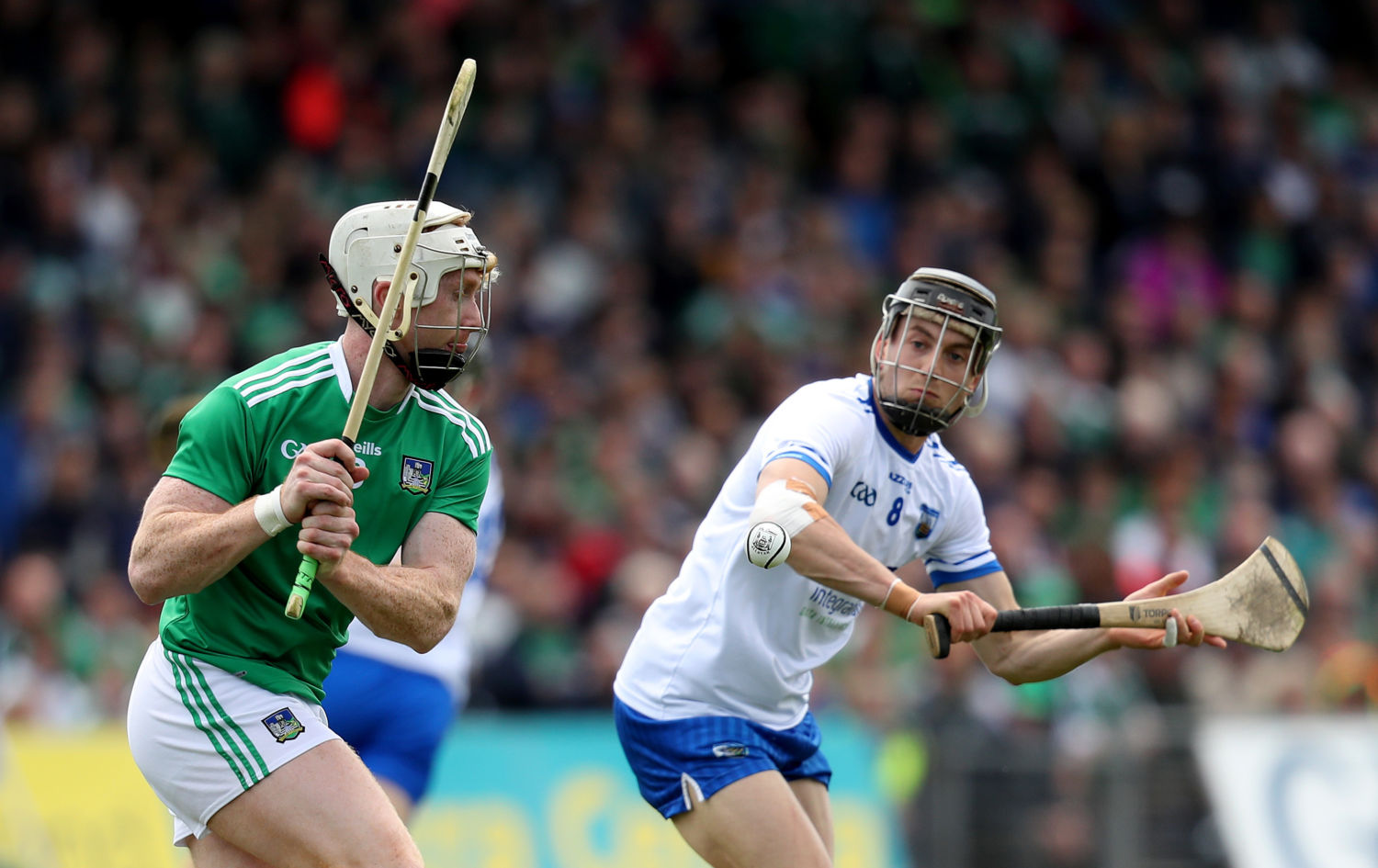 Limerick’s Cian Lynch about to be blocked down by Waterford’s Jamie Barron during last year’s Munster SHC clash in Walsh Park. Both men will be key to their side’s chances again on Sunday in Thurles.

Waterford go into this game as rank outsiders against a team widely regarded as being the best in the game at this time, physically strong, superbly fit and awash with talented hurlers. They are the current two time National League champions and defending Munster champions as well as the All Ireland champions of 2018, having beaten Waterford’s conquerors of 2017, Galway.

Impressive credentials indeed for a team whose genesis was the winning of two Munster Minor Hurling titles in 2013 and 2014, both achieved with replay victories over Waterford. In 2013 the back door saw Waterford going through to win the All Ireland against Galway after Limerick suffered a shock defeat. Both Waterford and Limerick, with virtually the same players from the minor sides of those two years, went on to win U-21 All Irelands, Limerick in 2015 and 2017, either side of Waterford’s win over Galway in 2015. In Limerick’s case those victories were springboards to the All Ireland win of 2018 and the success of the present team in winning last years Munster title and the two Allianz League titles.

It is worth noting that as many as eight of successful Limerick minor sides participated in the wins over Clare and Tipperary as compared to three starting for Waterford against Cork, Conor Prunty, Austin Gleeson and Stephen Bennett with Darragh Lyons and Patrick Curran coming on as subs. 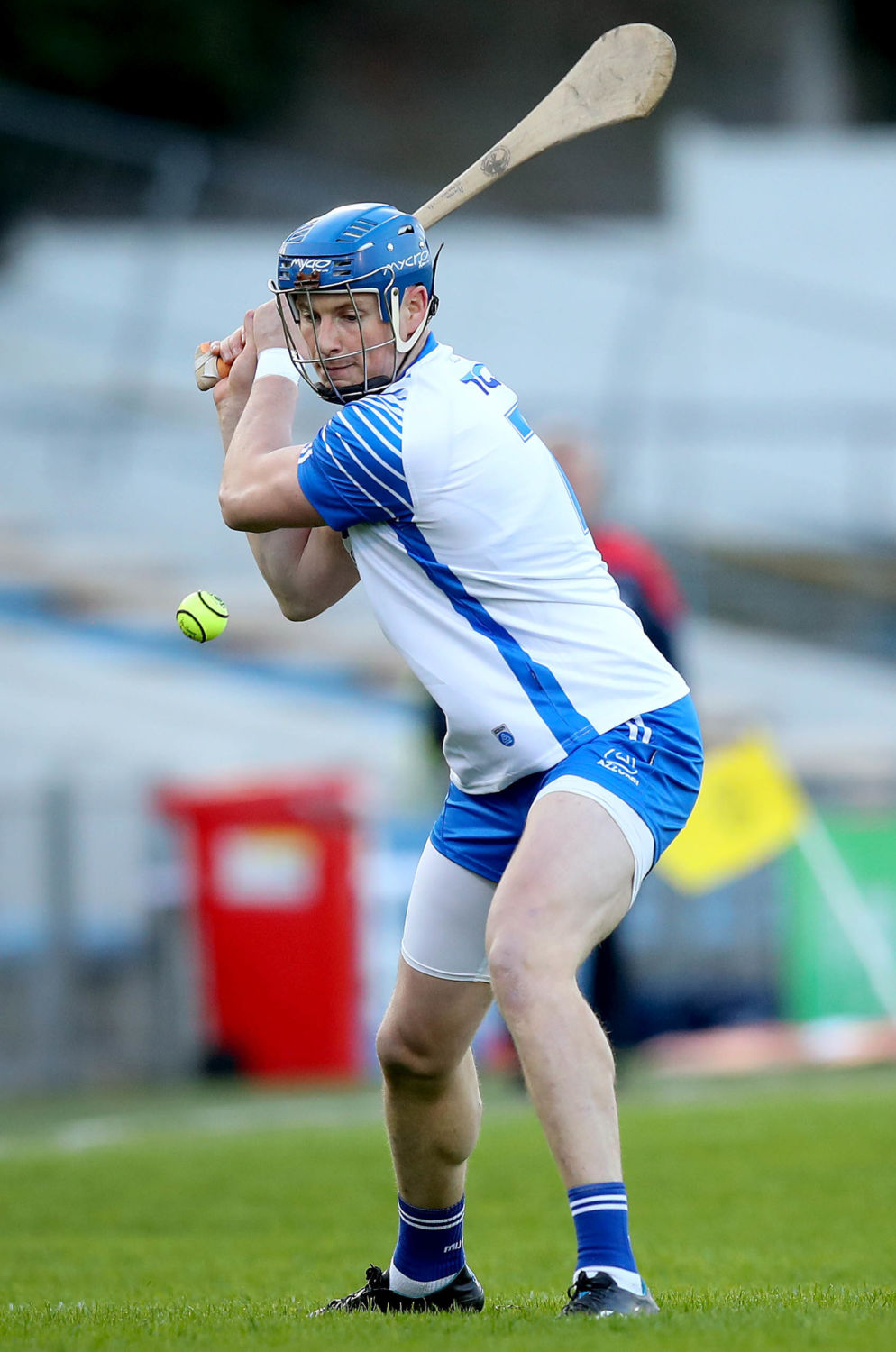 Austin Gleeson’s battle with Declan Hannon should have a big bearing on Sunday’s outcome.

LIMERICK CAN BE BEATEN

In this blitz like championship Limerick cruised past Clare in Thurles before impressively disposing of defending All Ireland champions Tipperary in Pairc Ui Chaoimh, making light of the horrendous conditions on the day. They are a side that has collected an impressive share of silverware over the past two years and yet, for all the hype surrounding them, they have had their lapses.

In their All Ireland winning year of 2018 they drew with Cork in their ‘Round Robin’ tie before losing to Clare in the Munster Final and last year they lost to Cork in their opening round tie and also lost to Tipperary in Thurles before later avenging that defeat when they beat Tipperary in the Munster final in Limerick. They then went on to lose the All Ireland semi-final to Kilkenny by a single point. Clearly then, they are a side, for all the hype around them, that can be beaten on a given day by a side that is prepared to go at them.

The sheet anchor of this Limerick team is their halfback line of Diarmuid Byrnes, Declan Hannon and Darragh O’Donovan. Though Kyle Hayes lined out at wing back against Tipperary we can expect him to return to his customary centre forward role for this game. There are signs that the Limerick fullback line is vulnerable and if Waterford can get low ball past their halfbacks to front men Dessie Hutchinson and Stephen Bennett I believe they have the pace and skill to cause big problems.

While Limerick will be looking for big plays from their halfbacks so too will Waterford. Against Cork Waterford’s domination in that sector was total with Tadhg de Burca holding the central position and covering both wings under puck outs and clearances. Calum Lyons’ driving runs forward had the Cork defence under constant pressure while Kevin Moran was very solid and always prepared to go forward. 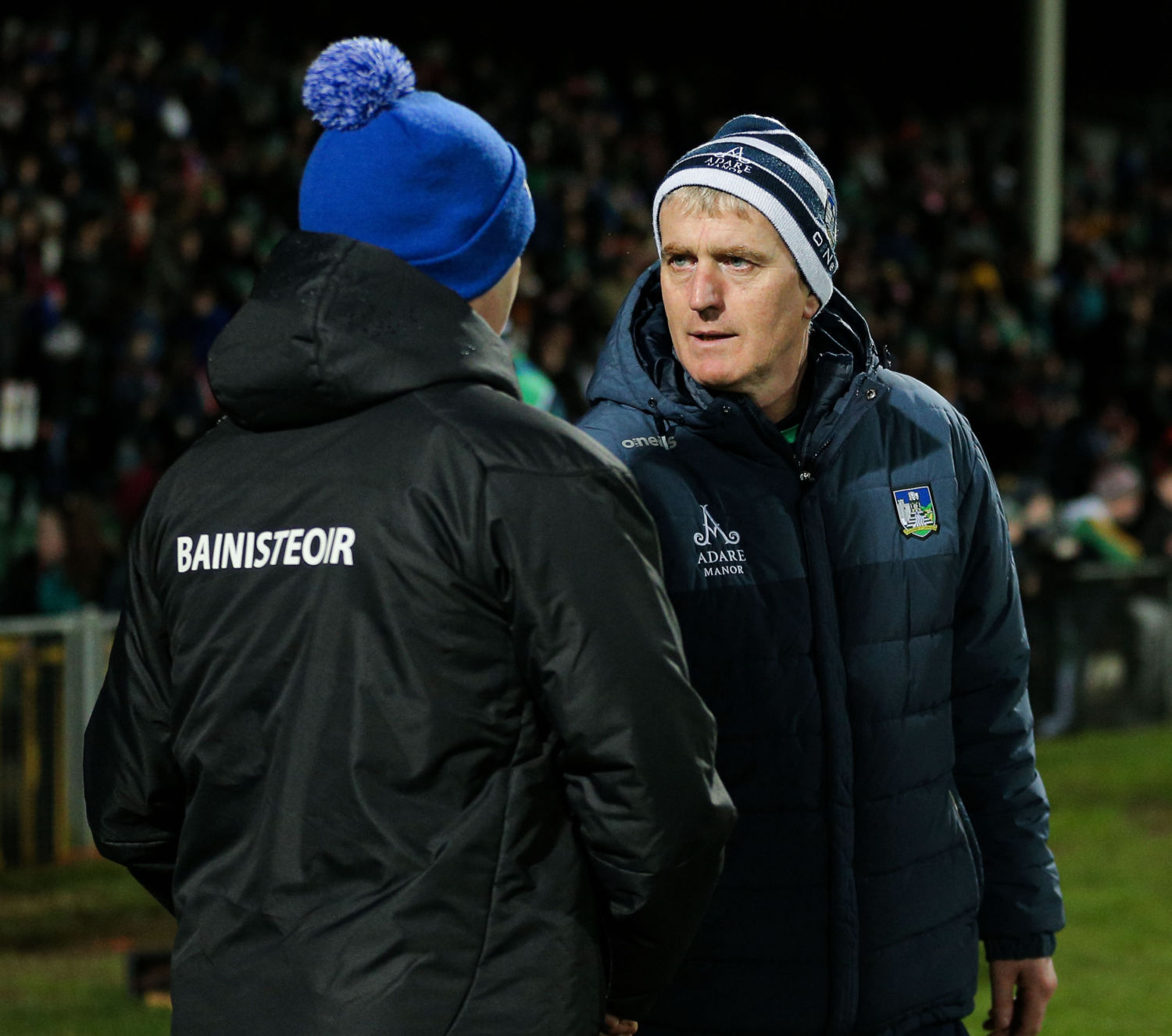 Waterford will be looking for ways to neutralise the influence of the Limerick halfbacks it can be expected that Limerick will be doing likewise where the Waterford line is concerned.

There is a big difference between the Limerick half forwards and their Cork counterparts. On the wings you have big men in Gearoid Hegarty and Tom Morrissey who will take marking and if Kyle Hayes is in the centre I suspect that he will be charged with man marking Tadhg de Burca and so denying him the freedom he enjoyed against Cork. I would consider Gearoid Hegarty the big man in every sense in the Limerick attack. His strength under the ball and pace in possession can destroy any defence. Waterford will have to find a way of containing him and that is where Kevin Moran’s experience could come into play.

Closer to goal Aaron Gillane can be a major threat but Conor Prunty is growing in stature with every game and will relish the challenge here. A big plus for Waterford against Cork was the form of Jamie Barron in midfield. The Fourmilewater man was at his devastating best, racing forward and taking on defenders. He could be the key to opening up the Limerick defence with an inform Austin Gleeson winning possession and backing up the work rate of Jack Fagan, Jack Prendergast, Kieran Bennett and Jake Dillon.

While Waterford’s use of the bench against Cork was impressive, I would not expect any change to the starting line up for this final. It is heartening to know that players on the line are chumping at the bit to get on the field. It is not clear if Darragh Fives or Conor Gleeson, both ruled out through injury for the Cork game will be available for selection on Sunday next.

Waterford will find this Limerick team a much different proposition to what they encountered in Cork. They cannot afford to sit back and wait for things to happen and must go at the favourites from the first whistle as they did against Cork. There is plenty of hurling in this Waterford team and with disciplined aggression they can be a match for any opposition.

I recall a noted Tipperary scribe when writing his preview of a championship game between Waterford and Tipperary describing Waterford as a good side but ‘lacking legitimate devil’. His opinion was voiced in the Waterford dressing room prior to 9-3 to 3-4 win over Tipperary in 1959. Perhaps that is what will be needed on Sunday.

HOW THEY GOT HERE

*Limerick are seeking their 21st Munster title; Waterford are bidding for their 10th

*Limerick beat Waterford by 2-24 to 0-10 in last year’s Munster championship ‘round robin.’ The last competitive clash between them was in this year’s Allianz League when Limerick won by four points in March.

*Limerick are attempting to win the Munster title in successive years for the first time since 1980-81. Waterford last won the title in 2010 and were last in the final in 2016 when they lost to Tipperary.