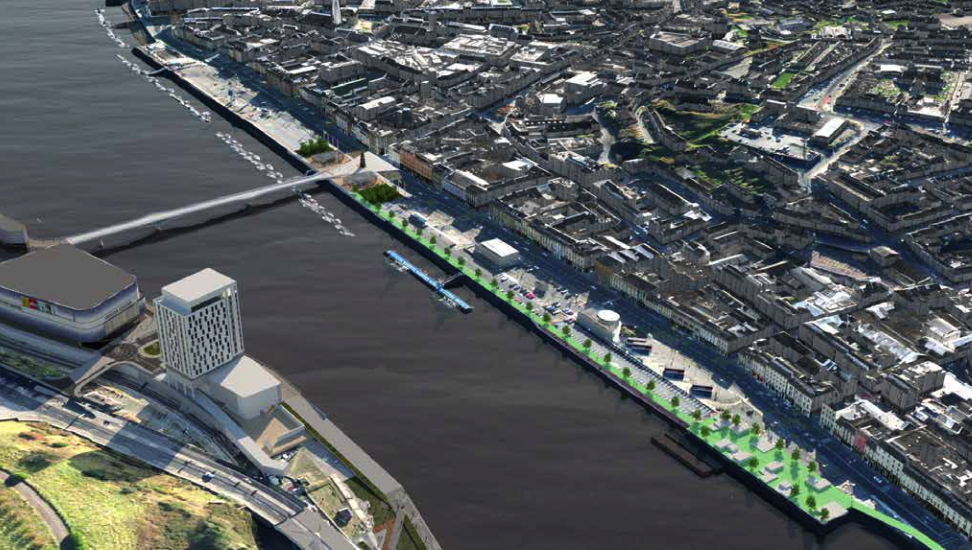 An artist’s impression of the reimagined Waterford, including a beautiful quayside entrance to the city

THE announcement of Minister for Housing, Local Government and Heritage, Darragh O’Brien, from the cobbles of the courtyard at Dublin Castle last week, is a once in a lifetime breakthrough for Ireland’s oldest city.

When Darren Skelton first broke this story in 2017, Waterford readers hardly dared believe it could be true. Unaccustomed to the kind of urban regeneration projects that Dublin, Limerick, Cork and Galway take for granted, Waterford had become benumbed to always playing second fiddle on the national league table of city progress.

So when the announcement was made last week, after a number of years of will they or won’t they, and measly commitments to fractions of the government financial support needed, it probably only faintly registered with a Waterford populace heavily burdened by an ongoing pandemic.

‘When world famous entrepreneur and philanthropist Andrew Carnegie of Carnegie Hall fame was laying the foundation stone for Waterford City Library in 1903, Waterford was recognised as a prestigious and leading European city… Today, business people across the world see the same promise and potential in Waterford’

O’Brien’s announcement from the heart of the capital city – Dublin Castle no less – was suiting to the gravitas of what was, finally, being committed to Waterford. And let us state here now, and lest anybody be in any doubt, this is not a handout. This is an investment on the back of the very right thinking that Waterford has amazing, untapped potential, which successive governments have failed to realise, and which will reap dividends for the country as a whole.

We have a waterfront site that will be the envy of other cities in the country, and indeed across Europe, when it is completed. We have already unlocked a tourism potential that links the west of Waterford to the east bringing people into the beating heart of our county. We have also reached out to our neighbours where that has made more sense than a continuation of out-dated parish pump politics. It will be visible in 2022 when cyclists and walkers come down river via a spectacular greenway from New Ross, via Kilkenny, to the South East’s urban capital.

The Déise has, for a long time now, been laying the groundwork for this new era in its history. It is a brilliant vision, and one becoming of Ireland’s oldest city. It has involved huge work on behalf of our Waterford politicians and Waterford Council headed by CEO Michael Walsh.

When John Roberts was designing magnificent Georgian buildings for Waterford in the 18th century, and later world famous entrepreneur and philanthropist Andrew Carnegie of Carnegie Hall fame was laying the foundation stone for Waterford City Library in 1903 (he funded the library), Waterford was recognised as a prestigious and leading European city.

Today, business people across the world see the same promise and potential in Waterford, and are prepared to put their money where their mouth is. The government input will be €110 million and more very well spent.

We’ll leave the final words of confidence in our city with Fianna Fáil Minister Darragh O’Brien:

“The North Quays project is the largest commercial development in Waterford and currently the largest regeneration project in the whole country… This project is a perfect example of helping a region to prosper.”