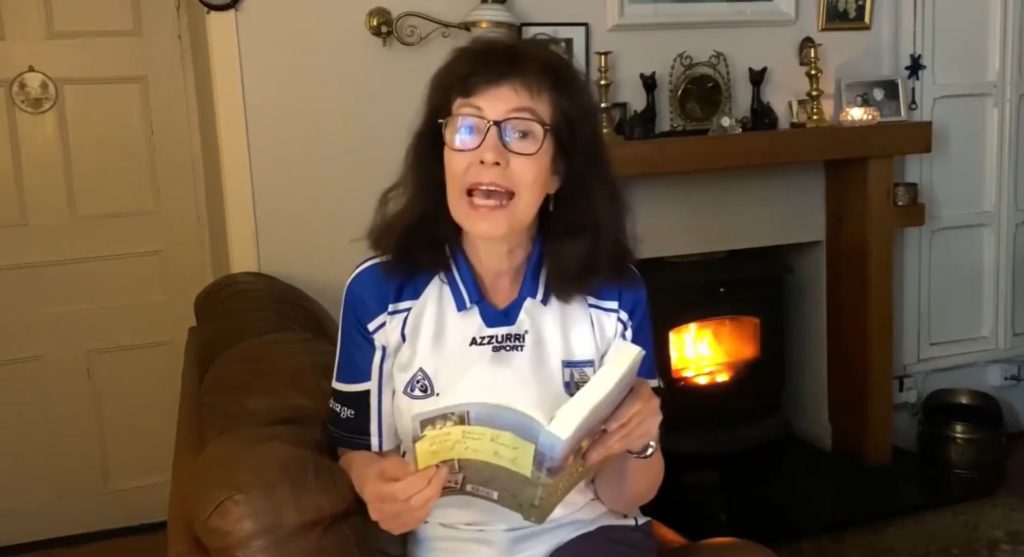 Catherine Foley reads from her book ‘Beyond the Breakwater’

A PERMANENT fixture on the Imagine Festival Programme is a morning of song, story, poetry and banter that packs Jordan’s early house on Saturday morning from 9am. Despite the early start, there is always a fifty-strong queue outside for a programme that has a strong socialist and workers’ voice. Normally, the smell of tea, coffee, sausage and red-lead blaas wafts across a bar that is quirky, homely and packed with atmosphere. Andy and Cathy Jordan run a special house.

We’re in different times this year and there’s a new normal with the festival broadcast online. For all that, the programme is largely successful in capturing the atmosphere of the event with some online contributions and some from previous years against a backdrop of continuous shots of Andy and Cathy’s niche arts bar.

Poet David Lordan is a welcome returnee. David opens his set with one of his own. ‘Hy Brasil’ – a phantom island said to lie in the Atlantic Ocean west of Ireland. Irish myths described it as cloaked in mist except for one day every seven years, when it becomes visible but still cannot be reached. David’s elusive heaven of ‘craic and caring’ is full of humour and no little compassion. He also reads Shelley’s ‘Time’ and Kavanagh’s ‘Hospital’ before bookending his set with a video-poem, in collaboration with singer Eoin Ó Ceannabháin, that is catchy and quirky.

Louis Quinlan is a socially-observant poet who has his antennae trained on the social and economic problems of the city in a poem that is remarkable for being both lyrical and angry. Paul Dillon chips in with an emigrant’s song before violinist Cathy Desmond – in her trademark theatrical red hat – pops up with a history of Wyse’s Park and a couple of ‘Emigrant’s Lament for the Déise’ to the air of ‘Sliabh Geal gCua na Féile’. Cathy and her hat also appear on George’s Quay with the more sentimental ‘Lara’s Theme’ from Dr. Zhivago and the Vera Lynn classic ‘We’ll meet again’ that seems pretty apt for the times that are in it.

Christy Moore’s song ‘Viva la quinta brigada’ touches local memories as it celebrates the Irish involvement in the International Brigade in the Spanish Civil War and is dedicated to Waterford man Peter O’Connor from Parnell St. Tadhg Williams continues on the Spanish War theme with a poem about Waterford teacher Frank Edwards who also fought for the International Brigade in that bloody conflict in which a million people died. Tadhg tells Frank’s story well in a song that he penned himself that was simply called ‘Frank Edwards’.

Peter O’Connor’s son Dr. Emmet O’Connor lectures in history at the NUU and has written numerous books including his most recent publication ‘Big Jim Larkin’. He’s here at the Jordan’s chinwag explaining the complex background to the Waterford Soviet in April 1920 when a workers council assumed control over the city along the lines of the Russian ‘soviets’. It was all part of a nationwide protest against the treatment of the Republican hunger-strikers in Mountjoy. Sinn Féin’s Mayor, Dispensary Doctor Vincent White, allowed the worker’s council to operate from the City Hall. Emmet explains that, “the workers council was a strange mix of nationalist, republican, Catholic and socialist elements” and the one-day strike called succeeded in shutting down virtually the entire city. After two days, the British backed down and the strike was over. “Dr. White,” describes Emmet, “was a somewhat theatrical character who described the city’s municipal mace as a bauble and replaced the mayoral red robe with a tricoloured cape.” The gesture drew the ire of the Redmondites who replied in song, “In our grand city hall, we’ve a big amadán, a man by the name of Vincent Ó Bán”. Another soviet occurred in 1923 when the workers took over the gasworks, where my grandfather worked, in an attempt to stop wage and staff cuts. “The soviets,” explains Dr. O’Connor to the online festival, “was an attempt to show that another world was possible.”

Tom Mullane is an ever-present singer-guitarist on the Jordan’s scene and ‘Rolling Home’ is an activist’s anthem. Paul Dillon is another favourite and chips in with the romantic Dylan tune, ‘My Love’ and ‘Just Once in a Very Blue Moon’. Later, Tramore writer Derek Flynn sings of living in shadows and saying goodbye to that Yellow Brick Rd.

Ard-na-Géine historian, Dr. David Toms, had a lot to say about the Waterford women cockle-pickers that plied their trade on the Apple Market and in and around Peter St. when I was a child – a lifetime ago. The women were celebrated in song, story and in artwork but there was no disguising the drudgery and danger of the low-paid work. The story of the cockle-pickers is the story of the incredible poverty of women forced into such a trade in appalling times.

Author Catherine Foley read from her splendid 2018 book, ‘Beyond the Breakwater’ from the comfort of her own blazing fireside. In her best Déise jersey, Catherine recalled the day that hurling legend Dan ‘the Man’ Shanahan delivered the oil to her home in Ring. Memories of dashing days in the sun when Dan melted the skies with bullet points and arrowed goals flooded back and the giddy excitement of a young girl’s heart throbbed throughout the reading. The secret of Catherine’s delivery is the force and honesty of her personality that never sees the camera as anything other than a friend to allow us all sit beside her fire thíos sa Rinn. No one tells – or writes – stories like Catherine Foley.

Cheekpoint’s Andrew Doherty has just released his second book, ‘Waterford Harbour – Tides and Tales’ and reads a tale of a Cheekpoint schooner from the collection. Andrew recites Bill O’Dwyer’s dramatic ballad poem on, ‘Capt Burns and the Schooner B I’ that recalls the tale of its final calamitous voyage and a Christmas storm. 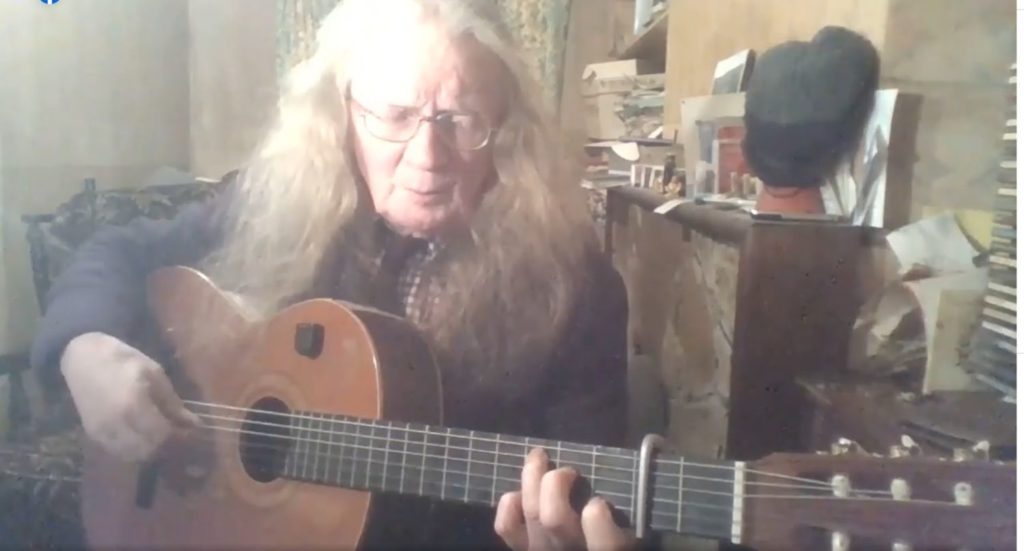 The story of American slave Frederick Douglas is a topic-opener for Waterford and the anti-slavery movement. Paul O’Brien’s fascinating short talk outlined the story of the slave, who was being transported back to his slave-owner in the USA, gaining his freedom simply because he had stepped ashore on the Waterford Quay to go for a short walk. Those few steps meant that he was now a free man under Irish law and a chance encounter with some dockers and a chimney sweep established his freedom. It was an incident that was widely reported and established a precedent that granted freedom to transported slaves that set foot on Irish soil.

Dave Lordan’s poem on Clonakilty’s win in the Tidy Towns is a hoot and brings an end to a packed Jordan’s Bar that is ironically as near as it is remote.

We live in strange times but Imagine and the Writers Weekend Festival make it somewhat more bearable.