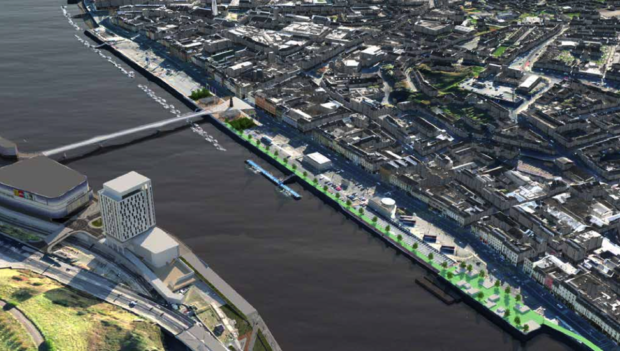 Arial view showing the North Quays on the left and a proposed new Gateway Plaza to the city on the right.

IT’S like waiting for a bus, you wait ages for one to come and then two show up at once. In addition to the monumental North Quays news, Waterford City & County Council has applied to the Urban Regeneration & Development Fund for a further €27,661,000 to support a stunning new development in the Cultural Quarter and Viking Triangle.

According to plans, which have been seen by the Waterford News & Star, the Council’s vision is to “re-imagine a living city by returning to a people centric city centre where people want to live, work and play”. The plan is to purchase a number of buildings and spaces throughout the O’Connell Street and Viking Triangle areas via Compulsory Purchase Order and repurpose them to create a “Smart City” that supports city-living, arts and innovation. 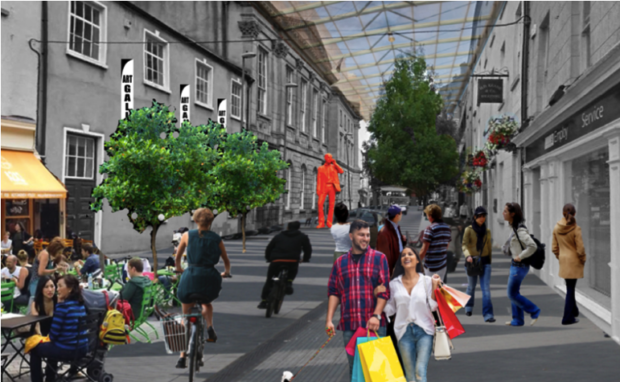 A new vision for O’Connell Street, which will link the Greenway to the City Centre like never before.

Part of the proposal includes putting a roof over part of O’Connell Street to create a public realm ‘living room’ which is seen to be a shared, self regulating and pedestrian priority space. Part of the plan will include extending the public realm spine from John Roberts Square all the way to the Greenway as it enters the city so cyclists can pass down O’Connell Street via a two-way contra flow arrangement on a shared surface. This new space will turn O’Connell Street into a creative hub with animated street life, light programming, space for public performances, street fairs and intelligently curated public art. 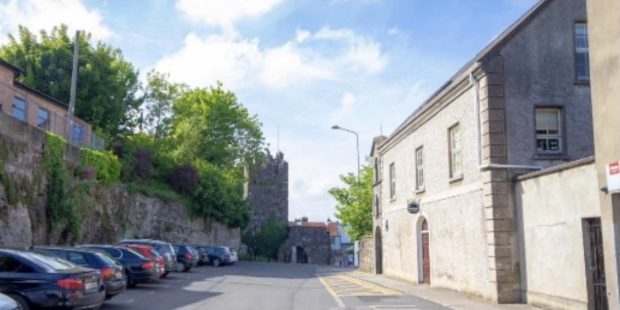 The second project in the development will see the reimagining of Jenkins Lane, or as it has been known for years – “the Darrer’s Car Park.” This area, which is currently monopolised by cars, used to be a residential area that created a vibrant inner city community. The Council plan is to re-establish the area with new residential properties and create a versatile public space called Beach Tower Plaza with the Beach Tower and medieval walls as a back drop. It could also be used for public performances and would be surrounded by additional projects such as the development of the Presbytery on George’s Street which would be transformed into a ‘Smart Data Innovation Hub’, and other buildings in the area which are currently vacant but would be repurposed as arts and innovation centres (including co-working spaces, education centres and arts in residence schemes).

With Millennium Plaza on one end of the Quays, the next plan is for a new plaza near Rice Bridge, which will act as a gateway to the city. According to the Council, the proposal is for a “new plaza with sculpture to define the Quays, welcome visitors to Waterford and become the seminal entrance point into the city as you cross the majestic River Suir”. It will provide a much needed amenity for the Cultural Quarter, that is lacking in dedicated public open space.

It will also become the gateway to the Waterford-Dungarvan Greenway, a destination and interlock with the south quays promenade, proposed sustainable transport bridge to the North Quays and the New Ross/Wexford Greenway beyond. 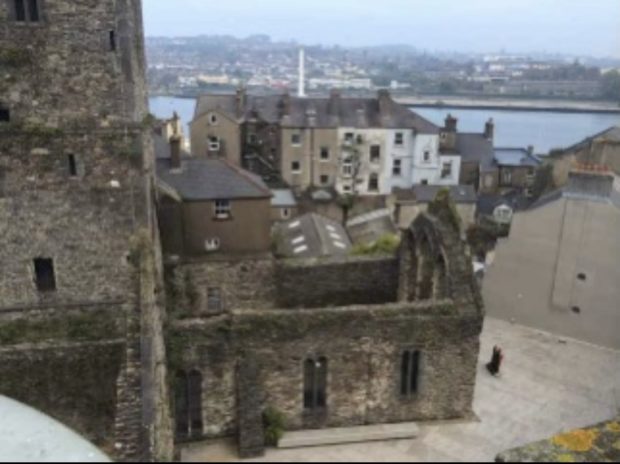 The location of the proposed new Friary Precinct

Currently the jewel in our city’s crown, there is scope for more improvement in the Viking Triangle and Waterford City & County Council have cleverly identified key areas for investment and development. The proposal is to create a new, mixed use development (housing/ commercial/ cultural) arranged around a new urban plaza adjoining the ruined Greyfriars medieval friary. This will be called the Friary Precinct and it will include affordable housing and commercial, community and cultural enterprises. It will essentially open up a currently unused area that’s steeped in history and repurpose it the most accessible and attractive way.

The Council have plans for the area behind Jordans/McLeary’s on Parada Quay to create a residential and commercial block that would retain front and party walls but create a new south facing facade towards Bailey’s New St and the French church. The plan proposes to rejuvenate the area following and expanding on the success of the Chairman’s Arch scheme. While some remedial works have been carried out over the last number of years to stabilise the buildings, substantial works would be required to return structures back to habitable use. Part of the plan would be to refurbish Central Hall, which was recently vacated by arts group Central Arts as well as an OPW owned building located at the centre of the Greyfriars precinct, connected to Central Hall, which will be repurposed to house the museum’s administrative offices. 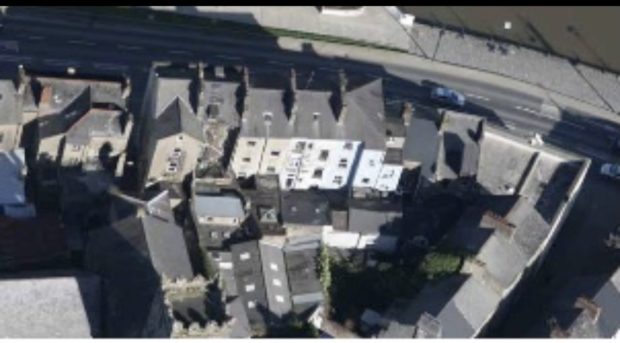 The final leg of the project involves turning Lady Lane and Spring Garden Alley into an inner city residential hub. Two vacant buildings will be developed on Lady Lane, one as a high end hostel and the other as residential apartments. In Spring Garden Alley it is proposed to develop a linear garden overlooked by a new residential accommodation at the western end. The current proposal incorporates the nature of the Lane and the Alley, developing inherently quiet spaces that will support a residential community.

The project has been advancing and will cost, in its entirety, €48.5m, €27.6m of which has been sought from the URDF and €20,888,000 to come from other sources, including other government departments.

Asked about the project this week, Senator John Cummins said that he has been “working on getting the funding delivered” and that he expects an announcement about it before the end of the year.

“This is a hugely ambitious plan with 22 constituent projects so it may be the case that it will have to be funded over a number of rounds of the URDF and naturally with the quantum of money that has been committed by government to Waterford for the North Quay’s it may reduce the level of support we get in the current round, which is expected before the end of the year but just like the North Quay’s funding, I am working exceptionally hard in the background to ensure this project is supported,” Senator Cummins said.

“It’s very exciting though. The creation of an upgraded shared space along O’Connell Street linking the whiskey distillery to the city centre has been mooted for a long time and must become a reality under this plan. Other projects like the ‘Gateway’ and ‘Beech Tower’ Plazas; the acquisition and renovation of the likes of 3/4 George’s Street and 25 O’Connell Street to be used for a productive innovation hub and creative arts studios is both ambitious and very exciting.”