Now that Government support has been confirmed, what next for the North Quays?

AS soon as Government funding was announced last week, the question on most people’s lips was – ‘what next?’

If you look at the development as a race to the finish line the first, and biggest hurdle has been cleared with the confirmation of the Government funding for the infrastructure around the North Quays i.e the moving of the train station, the widening of roads, the pedestrian bridge etc. The next hurdle is the sale of the land from Waterford City & County Council to Falcon Real Estate Development Ltd, which is expected to be completed this month. After that, negotiations with further tenants will properly commence and the entire wharf as we know it will be demolished and rebuilt to support the massive development that’s to come. From there, building can commence on the plan, which has already secured its full planning permission.

The actual design of the North Quays is not going to change from the one we’re already familiar with, however, some of the elements may be repurposed to reflect economical changes etc. The development will have a seven storey twin block of office space that can accommodate 1,100 jobs, immediately adjacent to a new transport hub that will incorporate the newly moved train station. There will be five residential buildings ranging in height from seven to 17 storeys, with 298 riverside apartments that will accommodate 500 to 600 residents. This will be done in partnership with US company Boomzaa (see page 6).

There will also be a 15 storey, 200-room 4-star hotel and conference centre as well as 30,000 m2 of high quality open and green community public space.

It will also have a mixed use commercial building that will comprise of tourism, retail, food and beverage. This will feature high quality shops, bars, restaurants, cafes and a creche. The cinema as is shown on the plans may be one of the elements that is repurposed, although the original building as exists in the planning will be built as planned. Visitors will be able to enjoy quality waterfront restaurants and rooftop bars and cafés with over 30,000 square metres of green open space and a riverside promenade for full access to the quayside with “unprecedented in Ireland quality of finishes”.

As part of the contract with Falcon Real Estate, Michael Street will also be developed and a final planning proposal for that is expected to be submitted this year. That will include a mix of private and social housing, a large hotel and an anchor retail tenant. 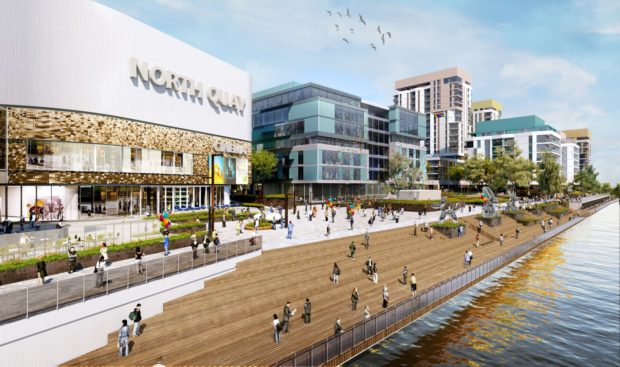 According to Niall Harrington of Fewer Harrington & Partners Architects, the time spent creating the actual North Quays site – expected to take from March 2021 to March 2022 – will not be wasted.

“During those 12 months the design team will prepare the construction drawings and we’ll also have an opportunity to sit down with the end users to get into the specifics of the type of spaces that they’ll require,” Niall said. “All the pieces are now in play, it’s not like we’re looking at a chess board with no pieces. All the end users are in play and all we have to do now is see where they all fit. It’s a very positive and exciting time, which has been difficult for people to grasp because it has seemingly gone on a long time. In reality, a project of this size was always going to take time.”

Speaking to the Waterford News & Star this week, Rob Cass of Falcon Real Estate Development outlined the next steps in the development.

“The next 12 months is essentially putting the ‘green Lego base in place’ which is 18 acres of replacing all the podium and piling to take the weight of the new buildings,” Rob said. “The old wharf was for cattle. The new is to support new trade for the next 100 years.”

According to Rob, the North Quays development is actually quite small in the greater scheme of things.

“It’s only worth €300m a year to the economy (8% growth) but it’s the signal it sends out that’s important – that we can have the best city centre in Ireland, and can lead Ireland in delivering the future jobs and trade. Historically it was about cows and trade to the world or in the 1600’s, being one of largest trading ports in Europe. Now, we can trade digitally and become the capital of creativity in Ireland, trading internationally in digital goods and our talent seamlessly.”

Rob is passionate about bringing people “home to Waterford”.

“The smart folk will move back now before North Quays,” he said. “Moving back 1,000 a year is realistic as we’re the most affordable city. Bring the talent back and let them stir it up with the experiences gained internationally. Once that talent is unlocked, we’ll be unstoppable and envied. There needs to be a mindset shift – why can’t we be Ireland’s second city?”