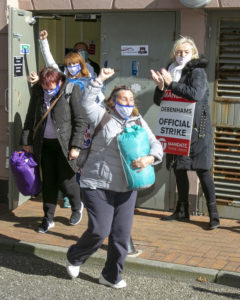 The Deise 5 end their sit in at the Debenhams Store in City Square. Photo: Joe Evans

A delegation of three Debenhams shop stewards alongside the Mandate General Secretary are to meet the Taoiseach Micheál Martin this morning to discuss how to come to a solution on an eight month long dispute.

The workers have been in dispute with the store’s liquidator KPMG over redundancy terms resulting in over 220 days on the picket in stores around the country including Waterford.

“He is well aware of the situation we are in on the basis of past engagements he has had with some of us not to mention countless exchanges in the Dáil over the months since our struggle began,” Ms Crowe said.

“Rather we expect solutions to be thrashed out. The resources are there between the value of the in store stock and the ongoing online business which was spuriously removed from the books of the Irish operation by the UK parent,” she added.

Following a five day occupation of the former store at City Square Shopping Centre in Waterford in October, Debenhams workers then urged the public to boycott the department store’s website when buying Christmas presents this year.

“Debenhams are still using Debenhams.ie but all money is going to U.K. So we’re asking people to have a conscience at Christmas and remember how long we have been striking,” former shop steward and Waterford woman Michelle Gavin said.

Ms Gavin described the meeting with Taoiseach Micheál Martin as “the only light at the end of the tunnel”.

“It’s been extremely difficult. We’ve been through several weather warnings now and people’s morale is dropping but we are trying to keep going – we’re not willing to give up,” she said.

The High Court last month granted an injunction to the provisional liquidators of the Irish arm of retailer, Debenhams, preventing what they described as “unlawful actions” and any interference with efforts to remove stock from its former stores.

Two male Waterford protesters were served with injunctions at the time.

Waterford Shop Steward Michelle Gavin said regardless of the outcome of today’s meeting, “the programme for government promises a review of how workers are treated in liquidation situations which ought to mean that the settlement the Clerys’ workers obtained and that we are fighting for should become the standard for all workers.”