Funding for a university in the South East a “critical issue,” Green Party TD says 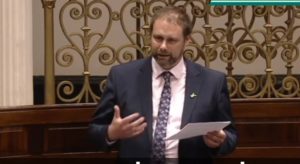 The young people of Waterford should “accept no less” than a commitment on behalf of the Government to adequate funding of the TUSE project, Green Party TD Marc Ó Cathasaigh has said.

Speaking in the Dáil on Thursday 19 November, Mr Ó Cathasaigh said the Technological University for the South East is a “project so important in terms of balanced regional development” that it is specifically referenced twice within the Programme for Government and that is must receive adequate funding going forward.

Addressing the Minister for Education Simon Harris, Mr Ó Cathasaigh said funding for the TUSE project was a “critical issue” and that the South East was “not competing on a level playing pitch” to the rest of the country.

Waterford is the only city in Ireland without a university status third level institution and, despite the Southeast accounting for 8.9% of the population, only 5% of the Higher Education income is allocated to the Southeast.

59% of young people in the Southeast who enter Higher Education leave the region to do so which results in around 11,000 students per annum leaving the region for education purposes. Mr Ó Cathasaigh told the Minister this was a “damaging” loss resulting in a “pronounced demographics donut in the region,” characterised by a missing generation of 19-45 year olds.

“I would praise WIT’s place within our community, both geographically and socially. Many of the students who graduate from WIT are the first in their families to attain a Third Level Qualification – this is true of my own family – and I know as a matter of fact the great pride both staff and management place in that,” Mr Ó Cathasaigh said.

But, he said, “our young people are going away, and staying away.”

Since 2018, €56 million has been spent on all TU processes. Of that, the TUSE has received €8.1 million, or 14%, a lesser share than that allocated to either Dublin, Cork or Galway, all of which are regions with existing universities.

Mr Ó Cathasaigh said this represented a “historic underinvestment in the Waterford campus”. While the Green Party TD welcomed the recent URDF funding allocation for the North Quays development, he said the news needed to be followed through with funding of the TUSE project.

On This Day in 1975: Ferrybank record pressing plant closed