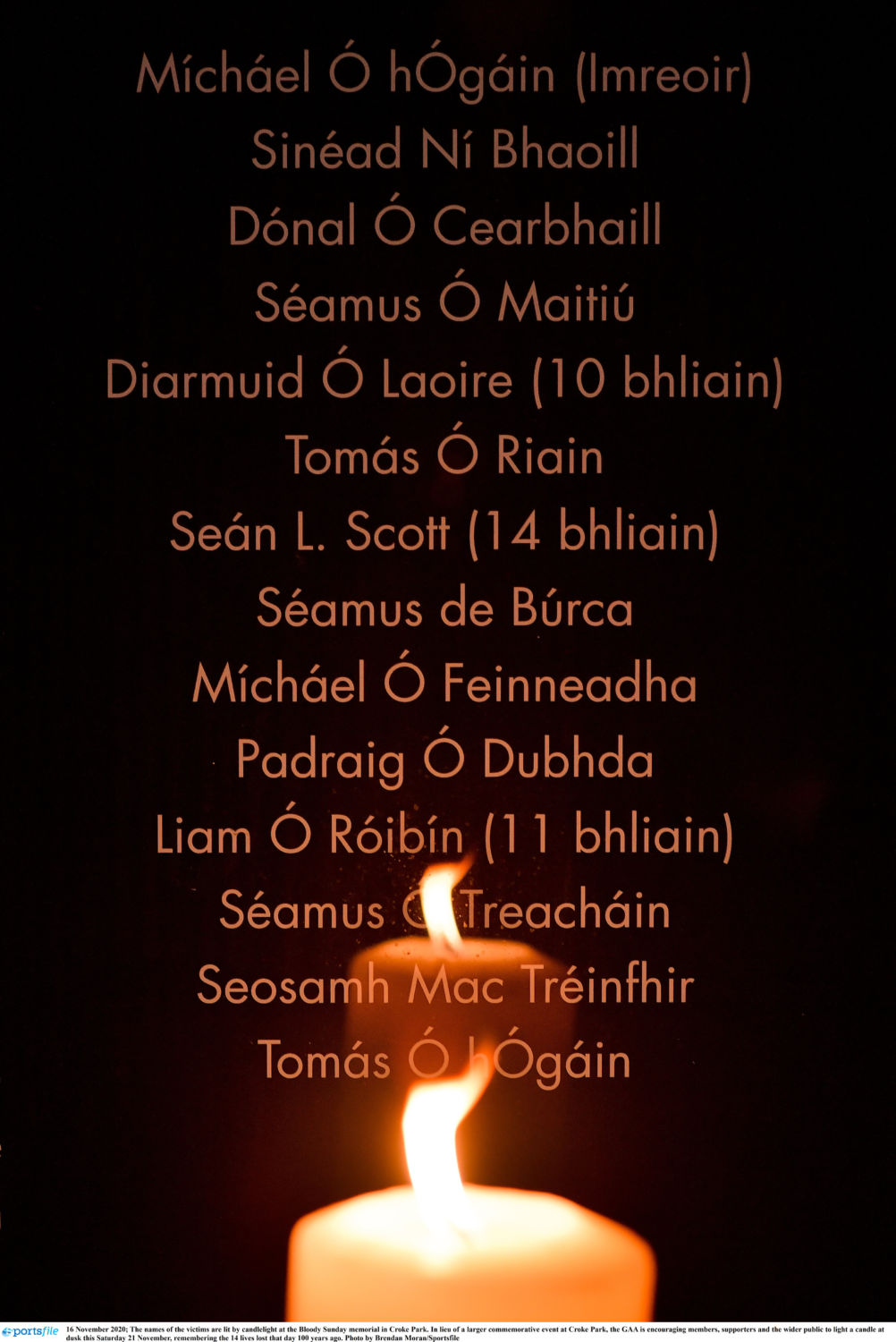 The names of the victims are lit by candlelight at the Bloody Sunday memorial in Croke Park. In lieu of a larger commemorative event at Croke Park, the GAA is encouraging members, supporters and the wider public to light a candle at dusk this Saturday 21 November, remembering the 14 lives lost that day 100 years ago. Photo by Brendan Moran/Sportsfile.

Waterford people have been asked to join in the GAA’s 100-year commemoration of Bloody Sunday by lighting a candle in their window tomorrow (Saturday) evening.

On Saturday evening the GAA will stage a special remembrance ceremony to honour the 14 victims killed at Croke Park by Crown Forces on Bloody Sunday, November 21, 1920.

Over the last five years the Association through the GAA Museum at Croke Park, the GAA History Committee and the Bloody Sunday Graves Project has been engaged in a series of projects to remember those who were killed as a result of the massacre at a Dublin v Tipperary football challenge match.

The event was a seminal moment for the GAA and defining moment in the Association’s link to the field on Jones’s Road.

On Saturday evening the lives of the 14 victims will be remembered in a ceremony that will coincide with the lighting of 14 flames in a dedicated area of Hill 16 and a corresponding pillar of light dedicated to each of those who died.

Ard Stiúrthóir Tom Ryan and Uachtarán CLG John Horan will lay wreaths on the spot where Tipperary corner back Michael Hogan was fatally shot that day, an area of the field in front of Gate 43 at the northern end of the stadium.

They will be joined by Uachtarán na hÉireann Michael D Higgins and An Taoiseach Micheál Martin.

There will then be a performance of a specially commissioned piece of music by the renowned musician Colm Mac Con Iomaire. The piece, entitled ‘More Than A Game’, was commissioned for use in the recent tribute videos produced by the GAA in honour of those who died and which have been viewed in excess of 20m times.

The ceremony will adhere to all protocols in respect of Covid-19 and will conclude at 6.30 for the arrival of the Dublin and Meath teams in preparation for their meeting in the Leinster senior football final.

A minutes silence will be observed before all GAA Championship matches this weekend.

Uachtarán CLG John Horan said: “At the heart of the appalling tragedy at Croke Park 100 years ago was a group of innocent people who went to a match and never came home. The attack on Croke Park was a defining moment for the GAA and gives us a connection to this venue that goes deeper than it being just another pitch.

“Our work on the centenary has focused exclusively on remembering the people who died, paying respect and tribute to their lives and making a commitment to ensure they and the events that occurred are never forgotten.” 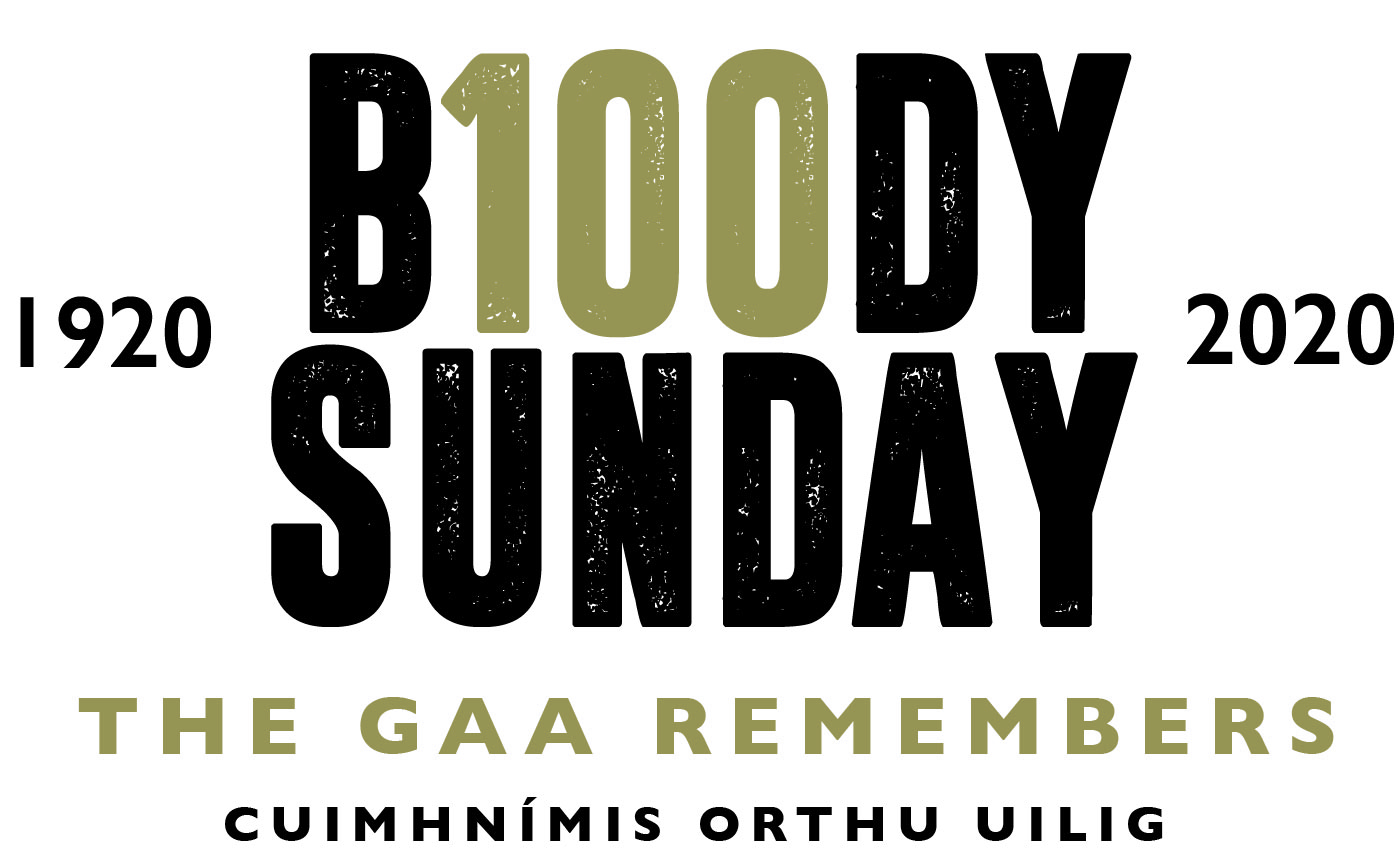 In the absence of spectators being permitted at Croke Park in line with Government Covid-19 restrictions, the GAA has encouraged members throughout the country to pay their own tribute to those who died at Croke Park by lighting their own candle.

Since 1926 the main stand at Croke Park has been dedicated to the memory of Tipperary’s Michael Hogan from Grangemockler. The club will unveil a statue to him in their village on Sunday, a project which was supported financially by Croke Park and the Munster Council.

The GAA Museum has assembled a major exhibition focusing on Bloody Sunday and while it is closed to the public in line with Covid restrictions, it is available online via www.crokepark.ie/bloodysunday.

A series of online lectures hosted by the museum in recent weeks are also available there.

A special section dedicated to the victims can be found at www.gaa.ie/bloodysunday

The Bloody Sunday commemorations have been influenced by the outstanding work of Sunday Times journalist and author Michael Foley, a member of the GAA’s History Committee, and whose recent RTÉ TV documentary based on his book ‘The Bloodied Field’, was supported by the GAA.

The GAA have also produced ‘The Bloodied Field’ podcast in conjunction with Michael Foley and is free to download.

A collaboration with The Abbey Theatre will see the staging of a series of special 14 monologues filmed at Croke Park dedicated to each of the victims and streamed online across the coming weekend from 7.0pm on the Abbey Theatre’s social channels.

Sub committees established by the county boards in Tipperary and Dublin have been involved in their own remembrance projects dedicated to the centenary.

Between November 2015 and November 2019 there have been headstones erected on the previously unmarked graves of seven Croke Park victims.

The GAA is also committed to unveiling a new artwork in honour of those who died which will be at the front of Croke Park and the Hogan Stand on Jones’s Road and will tell the Bloody Sunday story and remember those killed here.