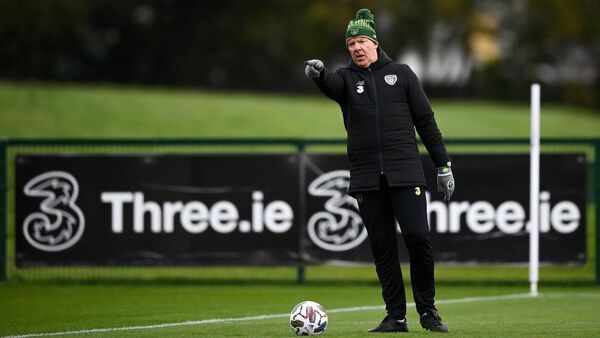 Republic of Ireland goalkeeping coach Alan Kelly has issued a blistering statement hitting out at the “narrative and innuendo created in the media” that his absence from the national camp this week was linked in some way to a controversial video shown prior to the international friendly against England.

Kelly was not in Dublin for this week’s UEFA Nations League camp and game against Bulgaria after returning home for personal reasons.

Kelly suffers from asthma and said he “had to take this decision with my own health in mind.”

However, Kelly is now “furious and disgusted” that some media outlets have suggested that “this decision is somehow linked with stories leaked to the press out of OUR dressing room.”

It is understood that the Football Association of Ireland (FAI) will seek input from Kelly and captain Séamus Coleman about a controversial video and speech manager Stephen Kenny presented inside the Wembley Stadium dressing-room.

While the video itself, mostly showing previous goals against England and references to the 1916 Easter Rising, was not considered inappropriate, elements of his 15-minute subsequent address caused discomfort among some within the 40-strong group of players and staff.

This afternoon Kelly blasted suggestions that he “bleated to the media” in the wake of the incident.

In a hard hitting statement, Mr Kelly said: “I recently made a difficult decision to put my health first and football second as I continued to work, travel, eat and sleep in camp with the Republic of Ireland national team during the recent international break.

“Covid-19 was present in the camp and continuing to spread from person to person during this period.

“I made the decision to ‘sit out’ the last match because the risk was becoming too high for me as asthmatic.

“I am now absolutely furious and disgusted with the narrative and innuendo being created in the media that this decision is somehow linked with stories leaked to the press out of OUR dressing room.

“I can say with 100 per cent certainty that I have never bleated to the media in 35 years as a player or a coach, and I have been in some pretty interesting dressing rooms.

“This narrative is wholly and totally wrong and it should beg the question – who is spreading and benefitting from this?

“I have been a loyal servant to Irish football for over 30 years and to now find my name and reputation being dragged through the mud is shameful.