Act fast if you have a stroke, top sprinter urges 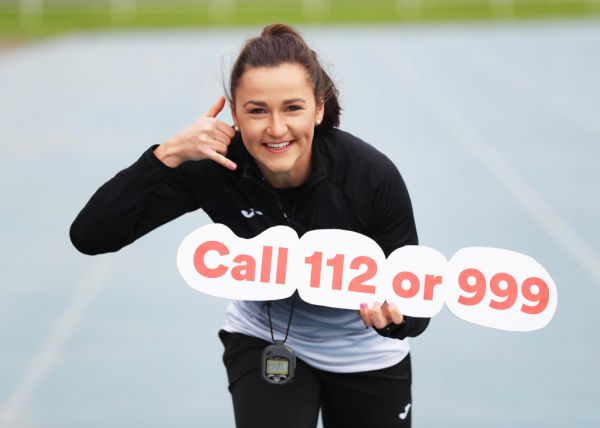 Ireland’s fastest woman is urging people to call for an ambulance immediately if they suffer a stroke.

International sprinter Phil Healy is lending her voice to an Irish Heart Foundation campaign as it emerges that almost half of people would not.

An Ipsos MRBI survey, which was commissioned by the Irish Heart Foundation and the Government, shows that just 55 per cent would dial 999 or 112 straight away.

“On average, 21 people will have a stroke every day, but 10 of them do not know they need to get to hospital as quickly as possible,” he said.

“A stroke kills two million brain cells every minute – and every 60 seconds saved between having a stroke to getting effective treatment saves one week of healthy life for a patient.”

The survey of just over 1,000 people aged 15 and older, shows that ringing an ambulance is the first thing 55 per cent of people would do if they were having a stroke, with women more likely to do so than men.

The register indicates a worrying trend with 59 per cent of people getting to hospital within four hours, whereas in the previous results in 2015, 56 per cent got there within three hours

And 2 per cent of those questioned would wait and see, try to relax, or ignore the symptoms, with males more likely to have given this response.

Mr Macey said that while treatments for stroke have improved dramatically, they still rely on people getting to hospital as soon as possible.

“One of those treatments must be administered within four and a half hours of the stroke, but the HSE’s most recent stroke register shows that roughly four stroke sufferers in every ten don’t get to hospital quickly enough to receive it,” he said.

“The register indicates a worrying trend, with 59 per cent of people getting to hospital within four hours, whereas in the previous results in 2015, 56 per cent got there within three hours.”

Ms Healy, from Cork, who is the holder of the 100m and 200m Irish sprint records, is an ambassador for the Act FAST Campaign.

“Stroke is one of the few conditions where your own actions and the speed of your response can determine your outcome,” she said.

“As a runner, speed is of the essence for me and every millisecond makes a difference.

“I have also trained in nursing and so I am only too aware of the need to act fast in the event of a stroke, to have the best possible chance at recovering.”

Minister for Health, Stephen Donnelly, welcomed the launch of the campaign.

“Stroke doesn’t stop during a pandemic and it is as important as ever that if you or someone you know is suffering a stroke, that you call 112 or 999 immediately,” he said.

“The faster you get to hospital, the better the recovery can be. Our acute hospitals around Ireland are open and operating safely.”

The Ipsos MRBI survey also found that a majority of people cite slurred speech as one of the main warning signs of a stroke, followed by facial weakness, the overall FAST message, and weakness on one side of the body.

A total of 44 per cent see smoking as the number one risk factor linked to stroke, with excess weight, lack of exercise and poor diet the other principal risks.