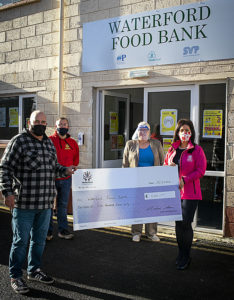 WATERFORD Food Bank, which provides food hampers to people living in poverty and homelessness, has responded following complaints about the cost of its hampers and further inquiries regarding transparency of the company’s finances.

Waterford Food Bank formed in February 2017 and officially opened in October 2019. For the past year, it as operated under the Waterford Area Partnership’s charity number. As of October 2020, it has been registered as its own company. Waterford Food Bank CLG is continuing to use Waterford Area Partnership’s charity number during the process of its charitable status application, which the Food Bank said is “in process”.

“There are a number of documents required to further the application for charitable status which our voluntary board of directors is in the process of preparing, which include a Strategic Plan, Business Plan and detailed financial projections for two years,” a statement in response to questions from the News & Star said.

Some criticism arose due to the Food Bank stating on their website that they had “charitable status” and listing a “Charity Number” section under which there was no option to click in and view the number. After complaints on social media, the Food Bank subsequently removed its website and they have told the News & Star the website is “under construction”.

“The reason the Waterford Food Bank website was made private is that it is still under construction, for example, the ‘Thank You’ section is not yet complete. The website is due to be launched when the Food Bank receives charitable status,” the statement read. Operating as a charity under the umbrella of another charity is lawful, according to the Charities Regulator.

A recent donation of €35,000 from West Pharma was spent on purchasing two vans for the Food Bank, Waterford Food Bank told the News & Star, adding that the vans cost €19,500 and €10,000 respectively.

“We also incurred expenditure of €1,400 for the signage on the vans and they had to be taxed and insured costing €1,400,” they said.
A spokeswoman for the Charities Regulator confirmed to the Waterford News & Star that a concern had been raised during the summer months about the practices of the Food Bank. The matter was assigned to a case officer, with the outcome of their examination of the matter expected to be made available when it is fully complete.

Separate to the Food Bank’s governance and finances, there has been public criticism of the cost of the hampers, priced at €25 per hamper. An official statement from Waterford Food Bank stated that it receives between €20 to €25 for each food parcel, 95 percent of which is paid by St Vincent de Paul on behalf of individuals and families in need. The remaining five percent comes from individuals, they said.

The Waterford Food Bank claimed they had “always been fully transparent” about the “necessity of applying a charge for food parcels”. Prior to their website being removed, it did not state that the food parcels would come at a charge of any amount. However, the Food Bank said people are informed immediately when they call seeking a hamper.

Waterford Food Bank explained in its statement that while a portion of the food is donated to them for free, such as non-perishable food items, the rest is purchased at a reduced-rate by the Food Bank themselves from the FoodCloud. This includes foods like meat, dairy, vegetables and fruit.

“The average retail value of each food parcel is between €60 and €70. Any food that is donated to the Waterford Food Bank is distributed completely free of charge,” the statement said.

Waterford Food Bank explained that any “profit” made from the food parcels goes towards covering their overheads – including rent for the building and petrol for delivering the parcels in their vans. Other overheads include light and heat, repairs, telephone, postage, stationery, health and safety, bank charges, public liability insurance and buildings insurance, and renovation costs on the premises they rent.

The Food Bank delivers approximately 200 food parcels per week to families and individuals in need and, according to Sharon Doyle, Project Lead, that need has doubled since the outbreak of the Covid-19 pandemic in Ireland. This year the Food Bank has distributed a total of 5,460 food parcels so far.

There is the question of how people living in poverty in Waterford can qualify for a food hamper. The website, which is now removed, did not state any guidance on how people may qualify.

The prices of the food hampers have increased from last year, when a News & Star article stated the price as being €20 per hamper. Waterford Food Bank said this was due to “increased costs that we are incurring”.