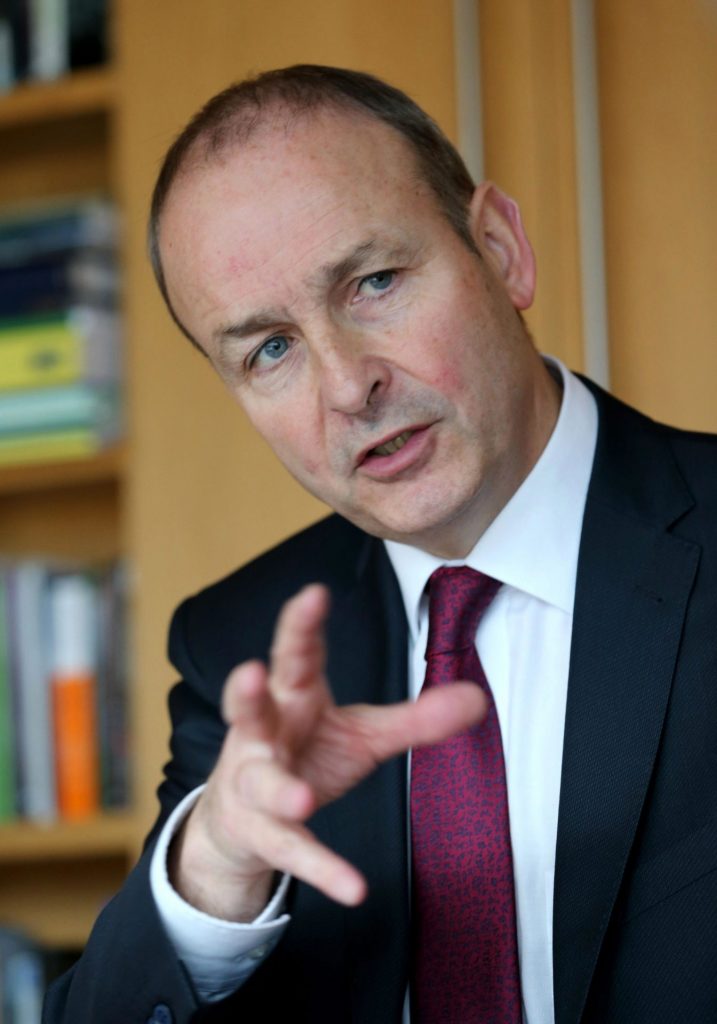 MICHEÁL Martin is famously a cautious man. But he is now definitely playing senior hurling, the term he coined to describe the vicious stroke-pulling nastiness of Irish high office. Senior hurling of the political variety is a cruel, ethics destroying quest for money either for yourself or your voters, a long dark hallway for the soul where thieves and pimps run free, and good men die like dogs. That is only if you are good at it.

You need the chutzpah metal to tell people to tighten their belts, that they are living beyond their means, whilst loosening your own belt to accommodate political donations and Charvet shirts. You need the reinforced neck to recommend suicide to those who try to stop you driving the economy off the cliff.

What will we remember about Micheál? We rightly sneer at Trump and Boris, but four months in, Martin’s Government-by-farce is wearing very thin. Like Trump and Bojo it is tiring to watch. Soon we will start to think of him as the outgoing Taoiseach. Martin has only two years to go, assuming Jim O’Callaghan TD does not run at him with a hatchet. Martin is a man in a hurry for the things he wants done before he expires. The question is, what does he want for Waterford?

‘The North Quays sticks a pin in the map for Waterford. What does it indicate in terms of a wider government acceptance of Waterford city as the regional medical, educational and commercial hub of the South East?’

Meanwhile, Micheál is sharpening the knife to finish Enda’s work on butchering Waterford and the South East with it. Enda managed to swindle us out of our hospital, all the promise of mutual respect for UHW turned to dust once the hospital and its budget were signed over to Cork administrators. Martin is planning a version of that for WIT.

Taoiseach Martin has form here. In 1996 WIT, then WRTC, was upgraded by Labour Minister Niamh Breathnach, setting out on the process of giving the South East its much needed university. In 1997, newly minted Minister for Cork Education, Micheál Martin, upgraded all the RTCs, turning it into another “much ado about nothing”! While replying to Matt Shanahan TD in the Dáil this week Micheál Martin smirked as he rambled through the same guff used to force the leadership of the hospital group out of the region. When asked about his Government’s commitment to a Waterford-led technological university capable of transforming the whole South East in the way the University of Limerick has transformed the mid-west in the past 30 years, Martin had no answer. Bertie could have learned something from the drivel that left the Taoiseach’s mouth as he stumbled around what felt like the empty recesses of Fr Dougal’s mind. Nor did he address the second question; was he trying to prevent a university of scale emerge to protect the existing universities? I closed my eyes and recalled Enda promising us a university and then destroying our hospital group.

The sole point of light that this Government has offered to Waterford is the North Quays. Wonderfully, the golfing shenanigans of one of the minor Dublin royals hid the news from the national media, so at the time of going to press the North Quays is still pressing ahead. As well as staying within your 5km, the Burghers of Waterford also insist that you do not mention the North Quays funding to anyone from Cork or Dublin. The Council have a track and trace system set up to stop the spread of the news outside the county. Loose lips sink ships. If news does get out, you are instructed to remind people that capital spending by Government is €10 billion this year. The South East should really be getting €890m of this, and Waterford as 2.44% of the country should be getting €244m. This capital spending is being done on borrowed money. The North Quays, with all the fanfare, takes €25m government expenditure each year for four years. Thus the North Quays is around 10% of Waterford’s fair share, and 2.8% of the South East fair share. The whole funding is less than 4% of the spending on the National Children’s Hospital, or a quarter of the cost of new bus lanes in Dublin.

I could go on, the point is, pay it down. The North Quays is a massive win for Waterford mainly because, after a famine that started in 2007, it is the first strategic growth project funded here. There are still one hundred and one ways the Government can foul up the North Quays. Super smart Sir Humphreys are skilled at shafting projects like this in creative ways that you couldn’t make up. Dare one even mention the more than two-year delay in even getting the promised second UHW cath lab to tender stage?

In other news, the airport runway extension has been further delayed. 2020 in many ways is uncannily like 2011.

Physical infrastructure like a new bridge is important to create sense of place and of investment in the future. Social infrastructure like schools, universities and hospitals has a more marked effect and is a greater indicator of long term prosperity. They attract people to live and work, and establish homes and families in a city.

Traditionally Waterford was a 65% industrial worker/35% services city, while Galway was exactly the opposite. The situation locally has changed dramatically in favour of services in Waterford over the past generation but there is still a way to go. The willingness of government to designate Waterford city as Cork and Galway were for specialist industry is enormously important. Cork is internationally known as a centre for the pharmaceutical industry of which Waterford has had a small but significant spin off, Galway is known internationally as a centre of the medical devices industry. Both these nodes were delivered by government policy intervention and the availability of highly educated workers from the third level sector. The existence of a university has been pivotal in both places. Limerick learned that lesson in the 20th century and the development of UL has allowed that city to begin to carve out a bright new future for itself.

The north Quays is a large step along the way of preparing the ground here but without appropriate university designation we will still export our young to those areas which have universities. Much has been written of the double financial loss to this area in that scenario. Local parents pay for their kids to attend university. They qualify and rarely return to Waterford because the work that the university sector engenders is rarely available here. WIT has done Waterford a huge service in delivering excellence whilst fighting against the odds. In any other country that excellence would have been long ago awarded with university designation.

The persistence of government in sticking with a merger of WIT with IT Carlow when the institutions have little in common, and indeed the acceptance by our FF, FG and SF TDs that the TUSE is the “only game in town to get the word university over the door in some form” does a disservice to WIT and to Waterford.

The failure to indicate the HQ location of the proposed TUSE and the machinations around the dissemination of small faculties around the region give great cause for worry. The North Quays sticks a pin in the map for Waterford. What does it indicate in terms of a wider government acceptance of Waterford city as the regional medical, educational and commercial hub of the South East?