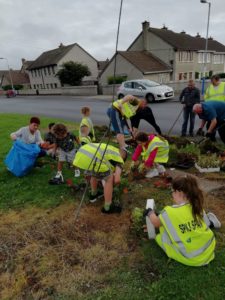 LARCHVILLE and Lisduggan recently came runner up in the Urban Neighbourhoods/Villages with a population under 3,000 category of the Pride of Place Awards.

The Pride of Place awards is an all-island competition that acknowledges and celebrates the work that communities are doing all over the island of Ireland.

Larchville and Lisduggan were runner up while Blarney, Cork City received the first place prize in this category.

John Burns of the Residents Association said the group were “ecstatic” to hear their neighbourhood announced as runner up.

“As chairperson of the Larchville Lisduggan Manor St John Residents Association I am so proud of the achievement. We have a village mentality here, meaning we all look out for each other. We all come from working class backgrounds so we know what it’s like to struggle and how to be a community,” he said.

Mr Burns credited the residents themselves, the clubs in the area and the people involved with the Residents Association for the win.
“We tackle anti-social behaviour and work closely with the council. For every person who causes anti-social behaviour there are a hundred great people who work to fix it,” Mr Burns added.

There are two councillors for the neighbourhood, Fianna Fáil’s Cllr Jason Murphy and Sinn Féin’s Cllr John Hearne. The awards ceremony was held virtually this year due to Covid-19 restrictions.

The Residents Association was reinvigorated about four years ago and works to make the area a better place for everyone to live in. Within the parish there is a pigeon club, Fr Pat Fitzgerald the spiritual advisor, a drugs awareness group, Scouts, the GAA and Waterford shopping centre to name a few of the things the community was recognised for.

The Residents Association works closely with Waterford Area Partnership, which provides the community with much needed funding for defibrillators, maintenance and gardening, and more.

During Covid, a dedicated phone line was set up for anyone who needed help getting groceries or prescriptions or any other kind of help which demonstrated great community spirit over the past few months.

“We’re just delighted, it’s a great boost for the community at a time like this,” Mr Burns said. Residents will be taking part in the Frank Leahy 5km Memorial Walk this year to raise money for the community.