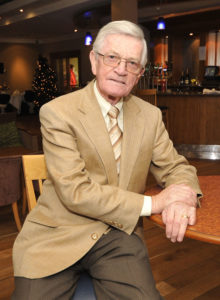 WATERFORD’S entertainment circuit is mourning the loss of another of its stellar talents, Michael Coppinger, the former Bandleader of the Royal Showband, who died yesterday (Thursday) at the age of 81.

Credited with the single best arrangement of the band’s biggest hit, ‘The Hucklebuck’, Michael graced the band halls of Waterford and far beyond with both the Royal and Brass & Co during a happy life in music.

His great colleague and friend, the late Brendan Bowyer, speaking only weeks before his own death last May, told daughter Aisling Bowyer: “Michael was responsible for me getting into The Royal Showband and even show business.”

In a tribute posted on her Facebook page on behalf of the Bowyer family, Aisling wrote: “There wasn’t a visit to Waterford that dad didn’t go to see Michael. He cherished their friendship. Our thoughts and prayers go out to Michael jr., Gillian and their families. Michael was one of the kindest loveliest men. A man who most certainly befitted the word, ‘gentleman’.”

Michael (then living in Ferrybank) and Jim (Cork Road) had previously played together in the Harry Boland Band and by 1957, with Brendan Bowyer on board, the showband which defined the era came into being. And the rest is history, very much of the ‘Hucklebucked’ variety.

Speaking on WLR’s ‘Déise Today’, Michael’s granddaughter Claire Coppinger described Michael as “kind, generous and modest – he was just a true gentleman. He really was. My Granny (Carmel) and Grandad had a fantastic life”.

Regarding her Grandad’s musical talent, Claire recalled: “when he was a child, only six or seven, he went to get piano lessons and the teacher said to Grandad’s mother that he was too good, he just didn’t need (the lessons) and that he was just natural, he didn’t need to be taught. Once he heard a song, he was just able to play it. It was amazing to see that as well.”

Also speaking to Damien Tiernan this morning, Tony Comerford described Michael Coppinger as “a fantastic arranger”. He added: “He had a unique sound on the saxophone – no matter who played ‘The Hucklebuck solo after (Michael) it just never sounded the same. He was absolutely fantastic.” 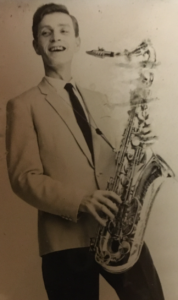 Eddie Sullivan, who also played in The Royal Showband, noted that Michael composed the legendary sax section in ‘The Hucklebuck’, “which is a fantastic piece on its own. He was a wonderful, wonderful musician and a very accomplished pianist”.

The tributes paid on social media overnight came in thick and fast after his son Michael shared the sad news on Facebook, writing: “Today we lost our precious Dad. We will cherish all our happy memories that we have had together. Love you always.”

Brian O’Neil posted: “He was a well-respected man (and) brought joy to people all over the world through his music”.

According to Padraig Gannon: “Another of our great showband stars (has) gone to his eternal reward. I had the pleasure of meeting him back in the late 60s when I worked in (the) Fairyland Ballroom in Roscommon. A real gentleman. His sax solo on the intro of ‘The Hucklebuck’ was his trademark and although many tried, no-one could copy his unique style.”

Said Stephen Travers, the Carrick-on-Suir native and Miami Showband member: “My sincere condolences to you and to your family on your great loss, Michael. Ar dheis Dé go raibh a anam dílis.”

And in a brief but beautiful comment, Gemma Traynor wrote: “He was loved by everyone who had the privilege of knowing him. Now he’ll be sadly missed.”

The words of William Vincent Wallace feel apt at this time and in this particular year which has seen Waterford bid farewell to two of its greatest entertainers, heroes of the Olympia Ballroom who lit up nights which left thousands of revellers wanting one more tune – and then another one.

Mr Coppinger’s Funeral cortege shall pass Havenwood Retirement Village, with mourners walking from St Mary’s National School to St Mary’s Church, Ballygunner, where Requiem Mass (adhering to HSE guidelines) will be celebrated, followed by burial in the adjoining cemetery. May he Rest In Peace.

The Requiem Mass of Michael Coppinger can be viewed on Sunday morning from 11:20am at the following link: https://youtu.be/RkqTglox4rY