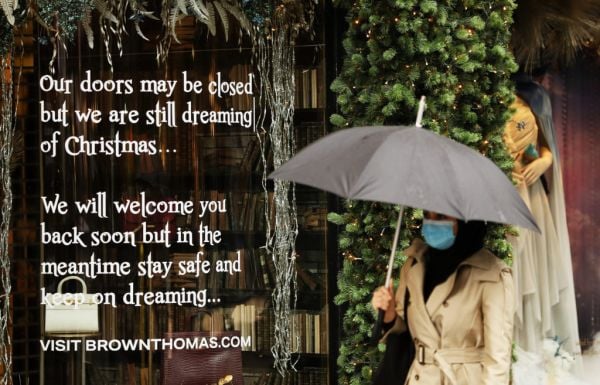 A leading epidemiologist has warned that family gatherings over Christmas could lead to further Covid-related deaths in the spring.

Dr Gabriel Scally said now is not the time for large get-togethers, and he revealed he will forego meeting his own relatives this Christmas.

It comes after the Government announced a wide-scale reopening of the country and the economy throughout December.

Dr Scally, of the Royal Society of Medicine, said: “If we have a very merry Christmas, and meet lots of friends and relations, then I fear that in January and February we may well be burying some relations.

“That’s the cruel truth of this virus. It’s desperately dangerous and we mustn’t let it surge back again.”

But speaking on RTÉ’s Saturday with Katie Hannon, Dr Scally said the end of the pandemic is on the horizon.

He added: “Within the next month or two, we’ll start to see large numbers of people being vaccinated, and why would anyone really want to risk going to social gatherings or large family gatherings at this time? This is not the time.”

Dr Scally’s concerns echo those voiced by the National Public Health Emergency Team (Nphet) in a letter sent to Minister for Health Stephen Donnelly prior to Friday’s announcement on the lifting of restrictions.

Nphet warned that “if restrictions are eased now to a similar extent but more rapidly than in the summer… in winter and over the Christmas period, a third wave of disease will ensue much more quickly and with greater mortality than the second”.

Dr Scally said he would prefer the Government to adopt a more cautious approach.

He said: “There is a temptation I think when you’ve done well, to think that you can take your foot off the brake.

“The virus is so infectious and so dangerous that it can just accelerate away again very, very rapidly. I would be more cautious than the Government has been about December, particularly in the run-up to Christmas.”

While Dr Scally said Ireland has done “exceptionally well” in the battle against the virus, he said Covid-19 is “still circulating at far too high a level”.

Asked about those planning to travel home for Christmas, he replied: “This is not the time to do it.

“This is the time for showing your love for your friends and your family by keeping them safe.”

He said the effects of the virus will be magnified “because it is the winter and people are indoors”.

He added: “They tend to keep doors and windows closed. That’s absolutely creating the atmosphere the virus loves.”

Announcing the reopening of the country on Friday, Taoiseach Micheál Martin said: “In easing restrictions, we are going as far as we believe is possible to achieve the best balance of health, economic and social considerations. But no further.

“The Government and I are satisfied that this combination of new arrangements strikes a safe balance between maintaining the pressure on the disease and creating space for families, friends and loved ones to be together this Christmas.”

Meanwhile, a further seven deaths related to Covid-19 were reported by the Department of Health on Saturday, and an additional 243 confirmed cases.

The number of people being treated in intensive care units is down four at 31.