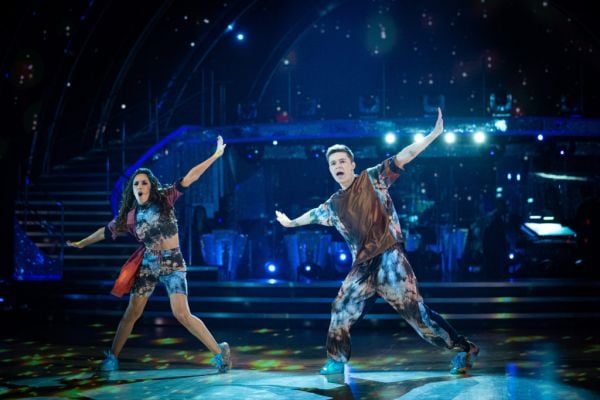 HRVY and his partner Janette Manrara made Strictly Come Dancing history by becoming the show’s first pair to earn a perfect score in week six.

In a week that also saw the return of Motsi Mabuse to the judging panel, the YouTube star wowed the judges with a couple’s choice dance to Sky Full Of Stars by Coldplay.

The 21-year-old received a standing ovation from both Mabuse and Shirley Ballas and, despite not standing, Craig Revel Horwood described him as the “GOAT”, meaning “greatest of all time”.

EastEnders star Maisie Smith, who has been in the dance off two weeks running, was close behind earning a score of 29 with a quickstep to When You’re Smiling by Andy Williams.

Ballas described it as “the success story of the evening”, while Revel Horwood dubbed it “incredible”.

Scottish TV presenter JJ Chalmers was third on the leaderboard, donning a kilt to score 25 with his Viennese waltz to Lauren Daigle’s down-tempo song Rescue.

Ranvir Singh, Bill Bailey and Jamie Laing all scored 24, while Clara Amfo languished at the bottom of the points with just 19.

Her jive to Tina Turner’s River Deep Mountain High was described as “a little bit hit and miss” by Ballas.

Only seven couples remain in the BBC celebrity dancing competition and one more must leave on Sunday night.

Mabuse returned to the judging panel after being forced to miss the show when she travelled to Germany following a break-in at her dance school.

While she was self-isolating upon her return to the UK, professional dancer Anton Du Beke stood in for her as judge.

Making her entrance on Saturday night, she said: “It was such a joy to watch from home on the couch but to be here, there’s nothing better than being here.”

Revel Horwood aimed a jibe at Du Beke following Bailey’s jive to Blondie’s One Way Or Another, which saw the comedian dressed as a punk in black leather.

His comments were critical, prompting boos from Du Beke who was sat in the audience.

Revel Horwood quickly replied: “Sorry Anton but you are no longer up here.”

The next couple will eliminated from the dancefloor during Sunday’s episode.