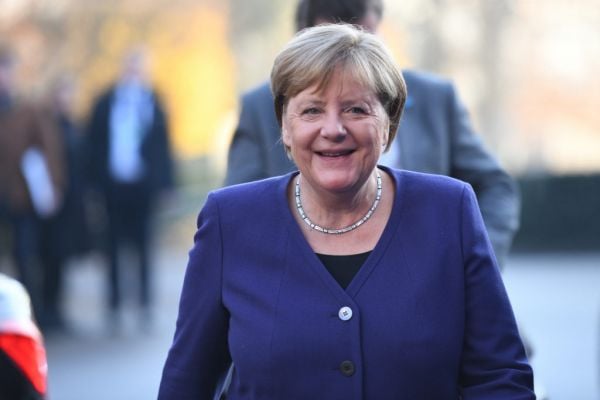 Failure to reach a post-Brexit trade deal would reflect badly on both the UK and European Union, Angela Merkel warned as talks continued to thrash out a late agreement.

The German leader said an agreement is in the interests of all parties in the talks, but warned that it could not come “at any price”.

Her comments came after Ireland’s foreign minister warned that the collapse of talks would have “costly and disruptive” consequences.

Talks between the UK and European Union are continuing in London with time running out to strike a deal before the current transitional trading arrangements expire at the end of the year.

The thorny issues of fishing rights and the “level playing field” aimed at preventing unfair competition on standards and state subsidies remain the major obstacles to an agreement.

Mrs Merkel told MEPs: “I hope that we will still come to a contractual solution.

“We, Britain and the member states of the European Union, are countries that are based on the same values, and it would not be a good example for the world if we didn’t in the end manage to craft an agreement.”

Dublin’s foreign minister, Simon Coveney, said he believes a deal can still be done, but that it is time to stop the “blame game”.

“The British Government was offered a much longer transition period, and they turned it down, yet they’re now blaming the EU for it – that’s just ridiculous,” Mr Coveney told BBC Radio Ulster.

He added: “I do think a deal is possible, but it needs to be finalised this week if possible, because we really are running out of time in terms of ratification and preparation.

“But I think a deal is possible because the consequences of no deal are so costly and so disruptive, particularly for the UK and for Northern Ireland, but for the Republic of Ireland as well.

“So I think there’s a big incentive to get a deal done.”

He said the negotiating teams – led by the EU’s Michel Barnier and the UK’s Lord Frost – need to find a compromise “that both sides can live with” on the fishing and level playing field disputes.

UK Environment Secretary George Eustice suggested talks could continue for another 10 days, leaving very little time for a deal to go through the ratification process, with votes expected in both the UK and European Parliaments.

He told Sky News: “We really are now running out of time – I know we have been saying that for some weeks – this is the crucial week we need to get a breakthrough.

“Of course if great progress were made this week and you were nearly there it is always possible to extend those negotiations.”

Shadow international development secretary Preet Kaur Gill said on Sunday that it would be difficult for Labour to vote against a Brexit pact.

“I don’t think we could vote against the deal because, like I said, the British Government want us to get a deal, it’s in the national interest,” the MP told BBC Radio 4’s Westminster Hour programme.

Without an agreement, the UK will leave the single market and customs union on December 31, and trade under World Trade Organisation (WTO) terms.

Mr Barnier said there were “reasons for determination” as he set off from his hotel for Monday’s trade talks.

Downing Street said the UK’s negotiating position would not be changed despite calls for a compromise.

The Prime Minister’s official spokesman said: “We want to try and reach a free-trade agreement as soon as possible.

The spokesman said that “although there has been some progress” the two sides remained at odds over fisheries and the level playing field.