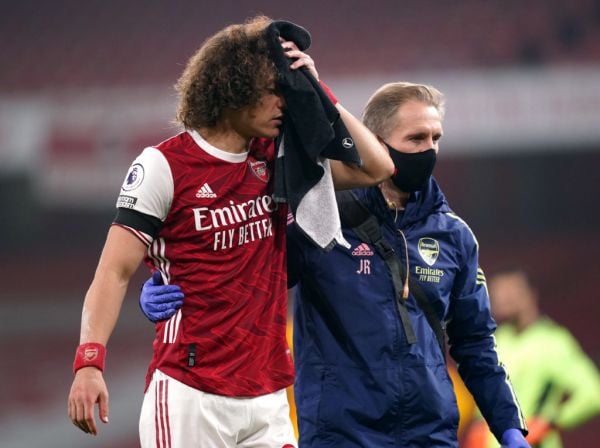 Introducing additional permanent concussion substitutes is a “flawed” approach and could lead to players trying to disguise symptoms in order to play on, according to a senior figure at brain injury charity Headway.

Concussion protocols are in the spotlight after the clash of heads between Arsenal defender David Luiz and Wolves striker Raul Jimenez during a Premier League match on Sunday.

While Jimenez had to be taken to hospital, Luiz was allowed to play on after an assessment, before being substituted at half-time.

Following the shocking clash of heads at the weekend, which led to Wolves striker Raul Jimenez fracturing his skull, Headway expresses anger and disappointment at football’s continued failings to protect its players from concussion. https://t.co/QHnvuB2tSf

Football’s management of head injuries is under particular scrutiny as pressure mounts for the game’s authorities to take greater steps to manage the risk of dementia among professional players.

The game’s law-making body the International Football Association Board is set to approve trials of an additional permanent substitution in the event of a player having a suspected concussion at its annual business meeting on December 16.

The Football Association says it stands ready to run a trial “at the earliest possible stages” of this season’s men’s and women’s FA Cups if the IFAB gives its approval.

However, Luke Griggs, Headway’s deputy chief executive, has highlighted issues with this approach and favours the introduction of a temporary substitute and a 10-minute assessment period.

“The concept of having a permanent substitute as opposed to a temporary substitute doesn’t really make an awful lot of sense to us,” he told the PA news agency.

“That could actually be even more problematic in as much as with concussion you need a degree of honesty from the player themselves to say whether or not they’re feeling a bit groggy, whether they have got blurred vision.

“Until we have these reliable sideline diagnostic checks there is a degree of uncertainty and a player does need to be honest about whether they’re feeling a bit off.

“If they know that they are going to go off permanently, are they going to be honest with the medics who are trying their very best in very difficult circumstances to make those decisions?

“It’s just flawed and if we do go for the system IFAB is currently talking about we’re really concerned that absolutely nothing will change.”

FIFPRO, the world players’ union, also believes a 10-minute assessment period and the use of a temporary substitute is the best approach.

Watford striker Troy Deeney said players must have a say in the decision over whether to play on, and told talkSPORT: “At some point there has to be an element of trust between player and doctor. As a player you know when something is not right.”

But Griggs said it had to be the decision solely of the doctor, and called for independent medics to be given a greater say.

“A player will know when there’s something wrong,” he said.

“But we need to take these decisions away from the players and away from the coaches. These decisions cannot be based on emotions. We know that professional footballers, and anyone who is passionate about sport at any level, will want to keep playing, they want to fight on to the bitter end.

“So giving this decision to the players is completely the wrong way to go. We need to make this a dispassionate, medical-based decision that the managers, the coaches, the players have no say in.”

Griggs said football’s adoption of concussion protocols had been “woefully slow” and contrasted it with the speed at which additional substitutes had been introduced during the restart period.

“We saw how quickly football could change its rules and move when it needed to, when it wanted to, with the introduction of five substitutes at the restart after the first lockdown,” he said.

“We don’t accept the delays, we don’t understand the delays, all this continued procrastination in talking about this, trialling that, it should have been a long, long time ago, and a further delay is going to put more and more people at risk.”

Former Tottenham and Hull midfielder Ryan Mason, who was forced to quit football at the age of 26 after suffering a serious head injury in 2016, said the current approach was not working.

“It’s pretty clear that five minutes on the side of the pitch while there is pressure to get the game restarted isn’t enough to see if someone’s concussed or not,” he told talkSPORT.

In relation to Luiz, Arsenal insist they followed the correct concussion protocols. Their head of sports medicine is former Lions rugby doctor Gary O’Driscoll, who is better placed than most to make an assessment.

The Premier League was understood to be keen to be involved in trials prior to the pandemic, and will await details of the protocols if they are approved by IFAB before deciding if and when it will take part in trials.

Medical staff from either club are able to view replays of incidents from a variety of angles using HawkEye technology to assist with the assessment process.