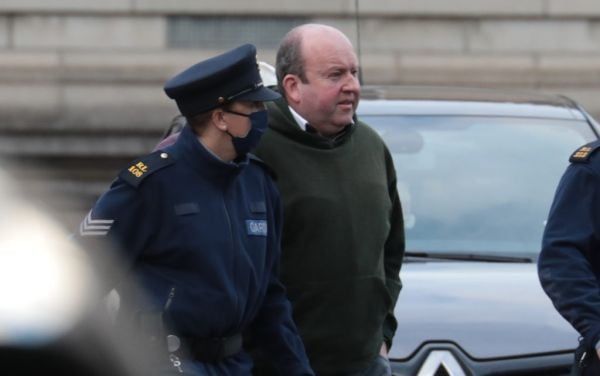 Three men are to remain in Mountjoy Prison after they refused to give undertakings to stay away from a Co Roscommon farm, which was the scene of a controversial eviction in 2018.

At the High Court last week Michael Anthony McGann, Colm Granahan and Kevin Taylor were jailed after Ms Justice Leonie Reynolds found they were in contempt of court orders to stay away from the property at Falsk, Strokestown, Co Roscommon.

All three were brought before the court following their arrest by An Garda Siochana.

Their cases returned before the High Court on Monday when the court, via video link, again asked if any of the three were prepared to purge their contempt and promise to co-operate with orders sought by KBC.

Mr McGann, who owns the property, Mr Taylor, a retired Garda of Dublin Road, Longford and Mr Granahan, from Ballina in Co Mayo repeated claims that the court orders they have breached were based on “fraud and perjury.”

The Judge said it was clear that none of the three wanted to comply with the court’s orders, and the court had no choice other than continue their imprisonment.

The judge said that the court will give a written judgment in the matter at a later date.

However, the Judge added that all three could come before the court at any time to purge their contempt.

Rossa Fanning SC appearing with Keith Rooney Bl, for KBC said the house had been secured.

It did not want to see the men jailed, but it does want the three to give undertakings to comply with the orders, counsel said.

Last year KBC Bank obtained orders, in proceedings against Mr McGann and his two siblings David and Geraldine McGann granting it vacant possession of the farm.

When they failed to comply KBC obtained further orders requiring the McGanns and all others to vacate the property.

The three men remained on the property preventing the bank from taking possession, KBC said.

The three men were arrested by Gardai and brought before the judge to answer their contempt, which they each failed to purge.

Some years ago, KBC obtained an order for possession of the farm arising out of a €431,000 debt on the property from a loan to its registered owner Michael Anthony McGann. The McGanns were evicted from the farm in 2018.

The house was later the scene of an attack on security men employed to secure it, who were forced off the property by a group of masked men and a number of vehicles were burnt.

The McGanns, who were not involved in that incident, returned to the house.

KBC then brought further orders against the family, who were arrested and released from custody after they gave undertakings not to return to the farm.