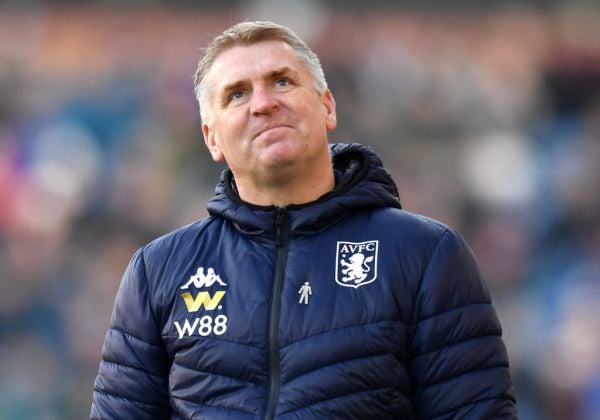 Dean Smith felt Aston Villa were denied a stoppage-time penalty in their 2-1 defeat at West Ham because VAR was too busy looking at offside against Ollie Watkins.

Striker Watkins was pulled up for a tight offside decision as he tucked in a cross from Matt Targett.

But it appeared as though Hammers defender Angelo Ogbonna had shoved Watkins into an offside position – which Smith felt was a foul and should have resulted in a penalty.

It was a tough end to a traumatic night for Watkins, who also lifted a 74th-minute penalty onto the crossbar after Declan Rice tugged back Trezeguet in the area.

“Offside is offside, so I’ve no problem with that, but they’ve given offside for part of the body that can’t put the ball in the net, and that’s because he is being fouled.

“If it’s not a goal it’s a penalty. They’ve got that wrong, they spent so long looking at the offside they don’t see the foul. It was more of a penalty than the first penalty.

“It’s frustrating, I’m disappointed with the result but I thought we were great, we’ve come to West Ham and outplayed them. We had enough chances to win this game comfortably.”

In an increasingly tetchy second half Villa assistant John Terry was booked along with a member of West Ham’s backroom team who, according to Smith, had been vocal in his criticism of Jack Grealish.

Smith said: “He had a go at me in the first half. We don’t have a go at the opposition players, but heir lad was calling my player a diver and a cheat. I spoke to David Moyes and Alan Irvine and they said they’ll deal with it.”

Hammers boss Moyes responded: “Everyone can hear a lot more these days because there’s no crowd in the stadium – it happens quite a bit. But the game was littered with free-kicks.”

Ogbonna had headed West Ham into a second-minute lead from a Jarrod Bowen corner, and after Jack Grealish equalised it was Bowen who converted what turned out to be the winner when he guided in a cross from sub Said Benrahma.

The 2-1 victory lifted West Ham to fifth, with Moyes having guided them to their best start to a season since they moved to the London Stadium.

Moyes added: “I’m thrilled to take three points, it wasn’t our best performance but at least we were resilient

“On the disallowed goal I was more disappointed that we hadn’t defended the cross. I don’t like a lot of the offside laws at the moment and we’re having to get used to it.

“I’m thrilled at the position we are in. If we win without playing well I’ll take that.”