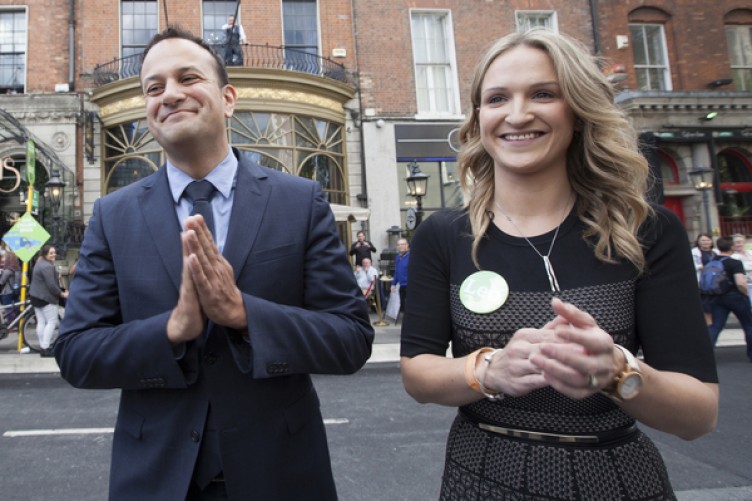 SO what’s a pregnant Minister for Justice supposed to do? This is what is preoccupying me today. Apparently there is no maternity leave for Ministers. Now of course she can put in a “sick note” which is custom and practice for the moment. But it’s hardly a thoughtful response to the needs of mothers.

It’s not just about Helen McEntee. It’s about any woman, every woman and all who have had their experiences of being pregnant and giving birth in this country, including myself.

Nowadays you are entitled to 26 weeks leave. There is also paternity leave of two weeks for Fathers to be taken in the first six months of the life of a newborn child. I am today remembering back to my own bizarre experiences of working and giving birth in 1980s Ireland. A time before maternity leave, childcare or even any recognition of mothers’ needs in the workplace.

I should have known from the first Office Party. As was traditional in those days, in a male dominated working environment, I never really mentioned the fact that I had a small baby at home. He was about three months old at the time. Myself and Himself were all excited at the big outing and had figured that we could bring the baby, park his pram in one of the offices and enjoy a couple of hours in the canteen with everyone else.

Living in Kilkenny at the time, we would have a 40 minute drive each way on a cold December night. With the baby wrapped up and asleep, we got dressed up for a much needed night out. I was so looking forward to meeting a few of my new colleagues and their partners outside of the everyday. To complicate matters my sister came along for the craic. Big mistake for this rookie!

We settled the baby in an adjacent office but when we walked into the bar, I picked up a bit of a vibe. Instead of coming over to greet us, people seemed to be giving us a wide berth. I assumed it was because they didn’t recognise me in my finery, but it was a lot darker than that.

Nursing our glasses of plonk we were queuing up to go into the turkey buffet when the “lads” in charge told us we couldn’t go in at all.

“Every year it’s the same,” they ranted. “Someone always tries to bring a floozie out from town.” A bit of a back and forth ensued. But nothing I said appeased the lads.

Highly insulted and being on the brink of tears, I cried, “I wouldn’t mind but I’ve brought the baby all the way from Kilkenny for this!” There was no budging them and in the end I thought well who would have wanted to be at that particular party anyway?

In that same job, after a few years, I was interviewed for a promotion by a panel of five men. One of the questions I was asked was why a high profile woman I had worked for in the past hadn’t changed her name when she got married. All the men laughed and then one asked me if I thought she was a bit mad having four children with double barrel names? I felt the anxiety rising as I owned up to keeping my own name too and saying I thought she was a brilliant woman and very far from mad!!

In fairness I think one or two of the men knew they were straying into dangerous territory, but it was like that in those days. No one had a clue about equality; about what was appropriate and what was not. It could have been a lot worse. Around the same time Eileen Flynn in New Ross was being sacked for having notions about being pregnant “outside of wedlock.”

I didn’t get the promotion but I continued to work there part-time while I had two more children. My second baby was born during my summer leave and when I returned to work Himself would drive him into the car park so I could run out to breastfeed in the back of the car.

I took it for granted that I had to manage all this myself. Neither were there Grandparents in the background to help. When I finally got to apply for my pension this year I discovered that to add insult to injury, this organisation had never paid any PRSI contributions for my 10 years of working there! So after all that I didn’t even exist.

Women now make up almost 50% of the workforce. So for heaven’s sake give the Minister her basic rights as a citizen and let us all see many more high profile women mothering in public.