A bad day but bright future still on the Déise horizon 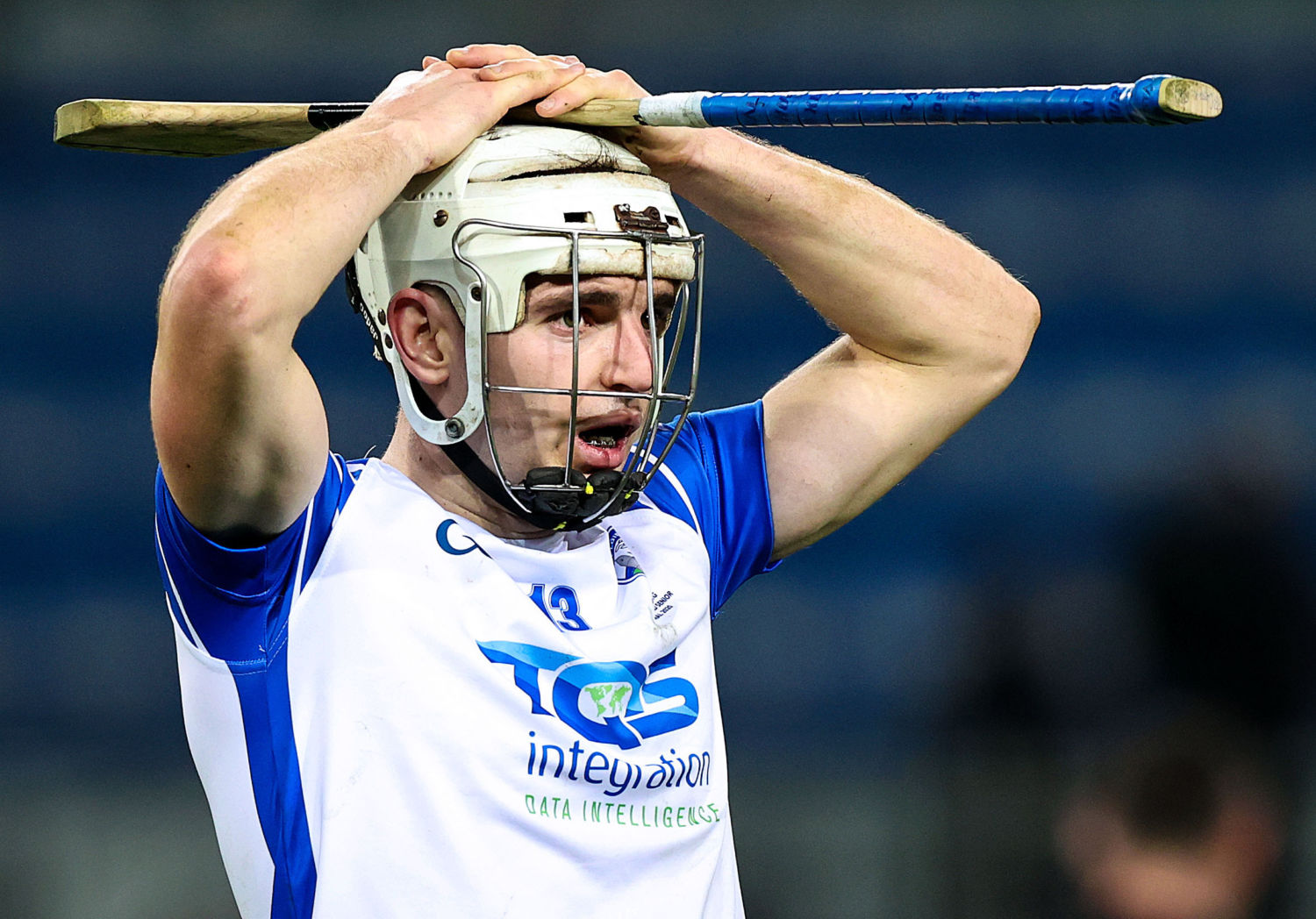 NOT OUR DAY: Waterford’s Dessie Hutchinson after the game in a lonely Croke Park. Photos: Inpho.

Sometimes in sport you just have to hold your hand up and admit that you were outclassed and beaten by a better team. This was the case on Sunday in Croke Park. Waterford gave it everything they had but Limerick are just a better team right now and are much further down the road than Waterford are. That’s not a cop out, that’s just the truth.

This was Limerick’s second All-Ireland win in three years and in all truth it should really have been their third in a row after they were ambushed in last year’s semi-final by Kilkenny. They also won the league title last year (beating Waterford in the final) and this year they didn’t lose a game in winning the Munster League, National Hurling League and Munster and All-Ireland championships. They’re not just a good team but they are a great team.

Coming into this game we looked at the semi-finals and while Limerick laboured their way to victory over Galway, Waterford swashbuckled their way beyond old foes Kilkenny. Those contrasting displays gave Waterford a great chance but you always felt that there was a big display in Limerick and unfortunately that’s exactly what transpired on Sunday. Just what we didn’t want.

Limerick scored 24 points from play (phenomenal) to Waterford’s eight. They had a 61% shot success from play to Waterford’s 38% and they won 54% of the turnovers in the game. Hegarty and Morrissey got 0-12 from play between them. But for me the word that sums up this Limerick team is their composure. They never get flustered and once they get the ball in their hand they are always looking up to find a man in a better position. It’s lovely to watch (if you were a neutral).

I’m not one for moral victories but there’s no shame in losing to this excellent Limerick team. Waterford have given us a brilliant couple of months since that opening round win over Cork and I think Liam Cahill and his players have been brilliant, on and off the pitch.

Let’s take the positives from a bad day and move on with hope of a bright future with this young team.

As in the semi-final win over Kilkenny. The turning point of this game was the third quarter. On that occasion it turned the game in Waterford’s favour and set them up for a great win but on this occasion it was Limerick who grabbed the game by the scruff of the neck in the quarter after the half-time break. Having scored the final three points of the first period to go in trailing by a goal, Waterford were rocked in the first five minutes after the restart with four unanswered Limerick points to put them seven up with 30 minutes to play and from there Waterford were always fighting an uphill battle.

SCORE OF THE GAME

From a Waterford point of view, Austin Gleeson once again lashed over a couple of beauties while half-backs, Calum Lyons and Kevin Moran both scored from miles out the field. But not surprisingly, with 30 to choose from, all the contenders come from the men in green. With 12 between them I could easily have gone for any of Tom Morrissey or Gearoid Hegarty’s efforts but I’ve gone for Seamus Flanagan’s third minute effort. This man is seen as a big target man but he should again that he’s far more than that. This effort running the wrong way back the field along the sideline under the Cusack Stand was a beauty and really set the tone for an excellent Limerick display.

SAVE OF THE GAME

A no brainer. Even though it ended in a rare All-Ireland Final that didn’t produce a goal, there were plenty of goal scoring chances at both ends. Nicky Quaid was very busy in the Limerick goal but there’s no doubt that the save or should that be saves of the game were produced by Waterford number one, Stephen O’Keeffe. Limerick were 0-5 to 0-2 in front with twelve minutes on the clock and playing well when they put together a lovely move down the left. When Cian Lynch released the marauding Kyle Hayes it looked certain for the net to billow but for a brilliant Stephen O’Keeffe save. The ball came back out to Cian Lynch and his first-time effort brought an even better save out of Stephen O’Keeffe. Absolutely top notch goalkeeping from the Ballygunner man.

He came in for a lot of criticism from Waterford fans at half-time. There were definitely a few frees that he didn’t give to Waterford and there’s no doubt that Declan Hannon should have received a yellow card in that first-half but overall I think he did a good job in what was an easy game to referee. He handed out nine five yellow cards, three to Limerick and two to Waterford. Not a factor in the result, for sure.

This is actually more difficult that you would think. It was a two man decision but a tight one for me. The RTE pundits went for Gearoid Hegarty but for me it was a toss-up between him and Tom Morrissey. Waterford held Hegarty to two points and Morrissey scoreless in the Munster Final but they showed what they are capable of in the semi-final when they chipped in with ten between them. They went better than that on Sunday, contributing 12 from play between them. 0-7 from Hegarty and 0-5 for Morrissey. Morrissey set up Hegarty for at least three of his points and he had a number of other assists too. Absolute class from the huge numbers ten and 12 in green. I’m a huge Kyle Hayes fan and he was also brilliant on Sunday. For Waterford, you couldn’t fault the effort of any player. For me Stephen Bennett, Austin Gleeson, Stephen O’Keeffe and Dessie Hutchinson were the pick of the men in white and blue. 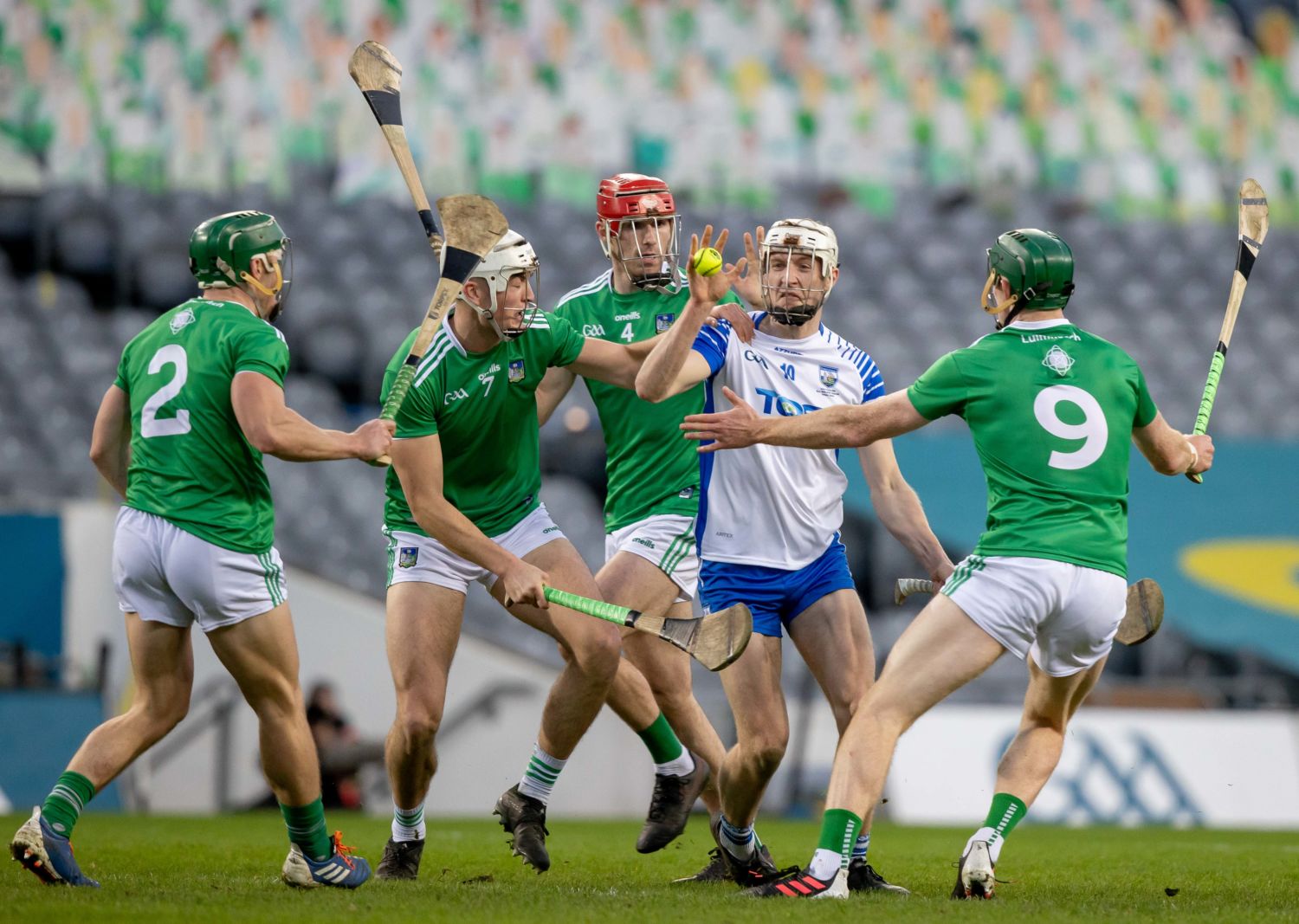 NOWHERE TO GO: Waterford’s Jack Fagan is surrounded by  Sean Finn, Kyle Hayes, Barry Nash and Will O’Donoghue of Limerick.

For Limerick it’s been an unbelievable season. They won every match they played on the way to lifting four pieces of silverware. The Munster League, the National Hurling League, the Munster Championship and of course the All-Ireland. It’s also a second All-Ireland SHC in three years. For Waterford it’s a disappointing end to what has been an excellent season. They had a good league campaign, getting to the quarter-finals before it was canned. They beat Cork to get to a Munster Final, acquitted themselves well in a Munster Final and then had great All-Ireland championship wins over Clare and Kilkenny. It wasn’t to be on Sunday but it was still an excellent season for Waterford under Liam Cahill, especially considering that they had gone two Munster SHC campaigns without winning a game, in 2018 and 2019. The future is bright, keep the faith Déise fans.