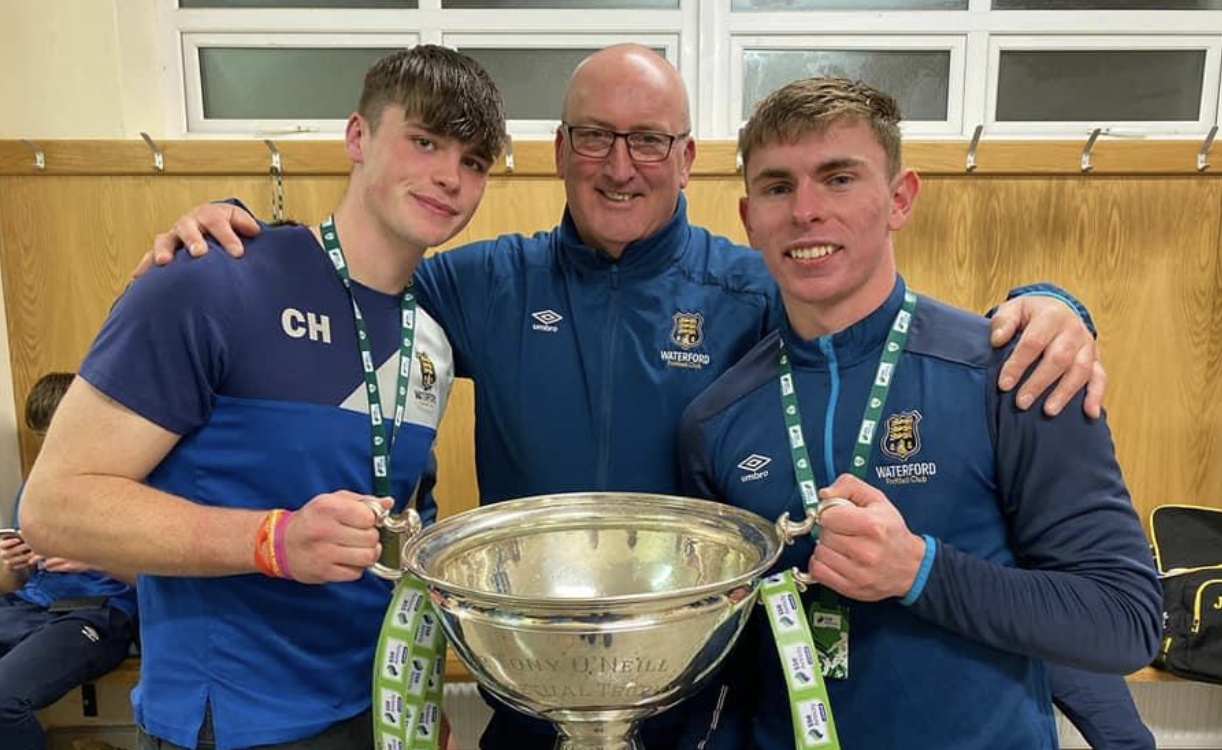 Billy Hearne with Charlie Heffernan and Ben Kirwan after winning the the U-19 league in 2019.

One of the most respected goalkeeping coaches in the country, Billy Hearne, has called time on his brilliant 17-year service with Waterford FC after having spells with the first team before moving onto the Head of goalkeeping in the Academy since Lee Power’s takeover of the club in 2016.

The De La Salle clubman, who has also coached at International level, will bow out at the end of the 2020 Underage season that will be played out to a conclusion in the coming weeks, and he will be a massive loss to the Blues in the future.

Although there was a radical changing of the Waterford FC Academy in recent years, Hearne held onto the role where he worked with some of the best goalkeepers to play with the Blues, including Matt Connor, Paul Martin, Charlie Heffernan, and Ben Kirwan.

Highly regarded across the country, his 17-year association with the Blues wasn’t always easy, but through thick and thin, he stuck with the club and his departure from his role at the RSC will be sure to be a big blow for new Academy head Mike Geoghegan.

In paying tribute to Billy Hearne on waterfordfc.ie, former Head of the Waterford FC Academy and Under 19 manager Gary Hunt said, “Since I joined the club four years ago Billy has shown me how important representing this club has been and how it is much more than just a football club. I have learned many lessons about the game from Billy which has helped me massively in my development as a coach in the game.

“I’m massively thankful for that. We have shared many special moments together but last season’s Under 19s national triumph will always live long in the memory. It was a year that provided us as a group so much to laugh and learn about that.

“It created a special bond between the group that is as important as winning any football match. I would like to thank Billy for his service at the club and I am sure this will be echoed by everyone who has had an association with him, be it through football or elsewhere.” There’s no doubting that Waterford’s loss is sure to be De La Salle’s gain as despite talk of retirement, it would be hand to see Billy hanging up the gloves forever.