The last photograph Danny McGrath sent to me was a mini-Christmas wonderland created by the members of the Dungarvan Men’s Shed almost exactly one year ago. It encapsulated Danny’s own sense of fun and optimism.

“ST Mary’s final moved to Fraher Field with 12 noon start.” That text message, sent at 8:13pm on Saturday, December 7 last year, was the last sent to me by my friend and colleague Danny McGrath, who died 15 days later.

The last email Danny sent my way was on Wednesday, December 18, from a photoshoot involving members of Dungarvan Men’s Shed.

The group were one of five Men’s Shed projects nationally which received additional support from the Topline group for their 2019 ‘All Hands On Deck’ initiative, from which they created a three-dimensional set of Christmas characters.

The fruits of their labour were showcased in a public garden adjacent to Dungarvan’s Civic Office. The project radiated optimism, industry and a sense of community – just as Danny did throughout his eventful but all-too short life.

Just four days after that photoshoot, Danny died unexpectedly. It remains incredulous to consider such a force of nature, a man in perpetual motion, in the past tense.

Part of me still can’t believe he’s not out on a job, be it at Thomond Park, Camphire or the Dungarvan Show. I still have Danny’s number saved on my phone. I suspect it will always be there.

Danny McGrath did what few other people have achieved in the course of conversations that I’ve been party to, both personally and professionally: he out-verbalised me!

And on more than one occasion, perhaps reflecting the keen athlete that he was for so many years, Danny lapped me on that particular front. God help anyone else in our company, battling to get a word in edgeways!

When Danny’s name came up on the phone, I happily recognised that the next 45 minutes to an hour was effectively a write-off from whatever I’d been busying myself with at the time. But here’s the thing: none of those chats were never, in any way, shape or form, a write-off.

There were times when he’d call and I’d be in the middle of something workwise which I felt I had to get done there and then, particularly before the shutters came down on a Friday evening. The work just had to be done, I convinced myself – I’d pay for it on Monday otherwise.

But here’s the thing: the work got done anyway while my friend, with a million and one ideas on the other end of the phone, was calling for a chat and almost always with a laugh thrown in.

What I wouldn’t do to hear from him over the next week or 10 days, arranging a pint or two in Dungarvan or a long overdue trip to a Munster rugby match.

The chat and the porter would be flowing in equal measure, with Danny undoubtedly plotting out the year ahead, particularly what lay in store for himself, his partner Lijana and daughter Olivia. To consider the totality of all that they’ve been deprived of is difficult to quantify.

Just over a week ago, I found myself negotiating the winding roads between Ardmore and An Rinn. I stopped for a few minutes at Old Parish graveyard, where I paid my respects to my Granduncle John Keyes (The Pike) and my juvenile athletics ‘mammy’, Nora Healy (Ballytrisnane).

Nora, like Danny, was a kind, generous and staunchly loyal type. It really was my good fortune to know them both; athletics remains a sport I owe so much to.

It was a blissfully still day with the clear skies offering the sort of light photographers thrive in. It was a day made for Danny McGrath and his lens. And as I drove above the bay and back into the town he knew and loved so much, his absence once more felt like a punch to the gut. 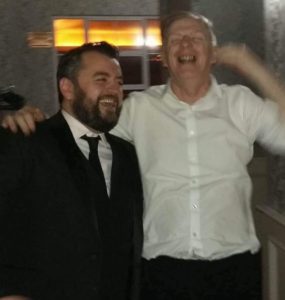 I had many great nights out with Danny, few more enjoyable than our annual get-together at the Park Hotel Waterford Sport Star Awards.

“The camera was synonymous with Danny – and we all followed,” said Danny’s friend Eamon Keane at his Requiem Mass on St Stephen’s Day last.

“From Whitechurch to Wyoming, from Lemybrien to Land’s End, people followed Danny. Why? Because he had the most amazing love, not just for his own life, but for your lives. He had such a great interest in people. There’d be great slagging had when it came to people seeing themselves (in Danny’s social shots) in the (Dungarvan) Leader after being out in Minnie’s and so on. He got the best of us and he gave the best of himself to us too.”

Eamon continued: “He was as good a sports photographer as I have come across. His picture of Peter Stringer diving over for his try in the (2006) Heineken Cup Final was one of his very best and you’ll find copies of it hung in frames all around the country – and it deserves to be.”

It’s a picture which to this day you’ll find hanging in several pubs throughout the province. And I know how proud he was about that particular snap taking off nearly as well as Stringer himself did when outfoxing the Biarritz backline in Cardiff, a city we had several great nights out in.

Danny was a brilliant man to have in your corner. A permanently coiled spring, there’s no telling what unreachable stars he’d have kept pursuing had he been spared so premature a sunset.

“The rainbow comes and goes. And lovely is the Rose;

The Moon doth with delight, Look round her when the heavens are bare;

Waters on a starry night are beautiful and fair;

The sunshine is a glorious birth; But yet I know where’er I go,

That there hath pass’d away a glory from the earth.”

Wordsworth’s text sings to me of the great friend so many of us lost just shy of a year ago. And while I shall always miss Danny McGrath, I’ll forever remain grateful for his counsel, his sense of fun and, most importantly of all, his friendship.