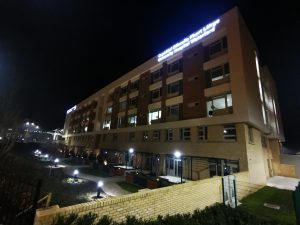 WHEN will University Hospital Waterford (UHW) be in receipt of the Covid-19 vaccine? Right now at the time of posting, no exact, calendar-pinned reply to that question has been provided by either the HSE or Department of Health.

The closest we’ve come to an answer locally was provided at 4:08pm today in a Tweet by Minister for Mental Health and Older People Mary Butler (FF) who stated: “Confirmation from HSE ‘over the course of the coming week (w/c 4th Jan) vaccination will be distributed to all 7 regional hospital groups including providing nationwide vaccination to approx 17,000 frontline workers.”

The Minister’s tweet also referenced the comments of HSE Chief Executive Paul Reid during today’s ‘Morning Ireland’ interview with Áine Lawlor in which he confirmed that vaccines will be distributed to the South/Southwest Hospital Group “over the course of the next week”.

Mr Reid said this will account for “Cork University (Hospital), the Mercy (Cork and) Waterford, across that group, we’ll be utilising (the vaccine). What we’ll be doing next week is moving into 25 nursing homes and across a further 17 hospitals (in) all hospital groups so by the end of next week…the vaccine will be utilised for about 25,000 (recipients).”

RTE News reported earlier that “2,000 vaccines were delivered to four acute hospitals in Dublin, Cork and Galway this week and up to yesterday evening over 1,800 of those have been administered. (Mr Reid) said a further 2,000 vaccines will be administered this weekend across the South/South West Hospital Group.”

During his ‘Morning Ireland’ interview, Mr Reid described the spread of Covid-19 as “absolutely rampant in the community and we know that for a fact. Everyone is at extreme high risk now of contracting the virus…The real picture over the last few days is most likely getting close to 3,000 cases a day. That is the extent of the virus we are dealing with. So when we get to these levels it has a severe impact across a whole set of areas, and the volume beyond what any system can cope with.”