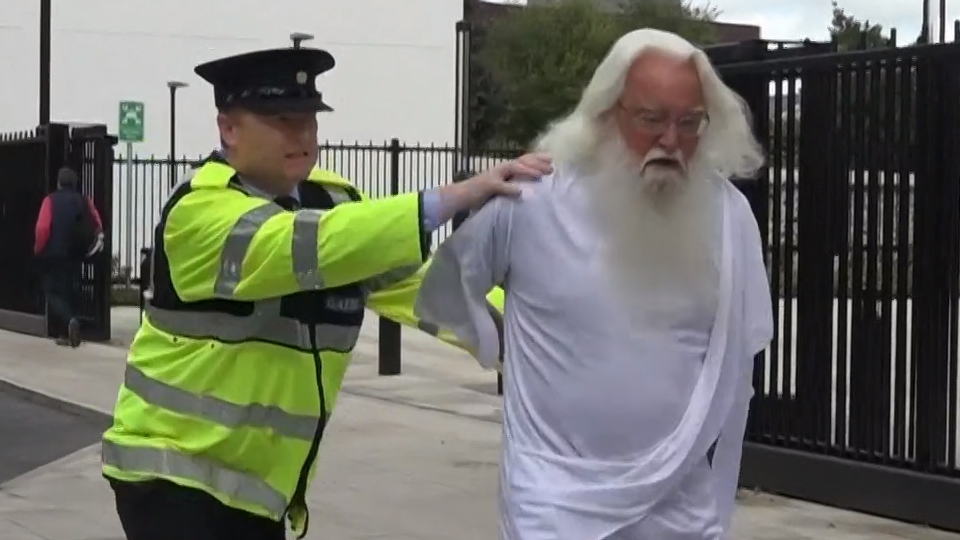 RTÉ has issued an apology for a ‘Waterford Whispers News’ sketch which was broadcast as part of its New Year’s Eve countdown show on RTE One.

The broadcaster’s apology came in the wake of almost 600 complaints it has received (at the time of posting) for the satirical news bulletin, fronted by former RTE News presenter Aengus MacGrianna in which God was described as “the latest figure to be implicated in ongoing sexual harassment scandals”.

The statement reads: “RTÉ recognises that matters which can cause offence naturally differ from person to person, within comedy and satire in particular.

“Having reviewed the feedback and complaints received up to this point, RTÉ wishes to apologise to those who were offended by the segment.

“The formal complaints received by RTÉ are being entered into our complaints system and will be responded to in accordance with the relevant statutory process.”

The Catholic Primate of All Ireland and Archbishop of Armagh Eamon Martin was among those who criticised the sketch, which was partly shot outside Waterford Courthouse.

Archbishop Martin tweeted: “I am shocked that producer/editor of ‘NYE Countdown Show’ @RTE @RTEOne didn’t realise how deeply offensive was a mocking ‘news report’ accusing God or rape & reporting his imprisonment. This outrageous clip should be removed immediately & denounced by all people of goodwill.”

He continued: “To broadcast such a deeply offensive and blasphemous clip about God & our Blessed Mother Mary during the Christmas season on ‘NYE Countdown Show’ on @RTE, @RTEOne & on Eve of the Solemn Feast of Mary, Mother of God is insulting to all Catholics and Christians.”

The incoming Archbishop of Dublin, Dermot Farrell, said he was “deeply disturbed” by the sketch, adding that “a discourse which fails to respect the victims of all ages and genders of this most degrading of crimes has not any place in our world”.

Meanwhile, a brief statement by the Association of Catholic Priests (ACP) has declared its “dismay at the decision of RTÉ to televise a very offensive portrayal of the God whom Christians worship. The portrayal of God as a rapist is deeply offensive. In light of such provocative insensitivity, the ACP would like RTÉ to commit to a review of their polices and approaches to reporting on the Christian faith, and to make the results and relevant recommendations open to public review.”

On his Facebook page this morning, WWN’s Colm Williamson posted a photo of this morning’s Irish Daily Mail front page, headlined: “Fury at RTE ‘God is a Rapist’ Clip.”

Having also posted The Irish Times’s coverage of Archbishop Martin’s comments yesterday on his (Williamson’s) page, Gerry Kane was prompted to post the following comment: “Seriously if God doesn’t have a sense of humour I am in serious trouble.”

Directly beneath that, Sebastien Liebus wrote: “Starting 2021 with an excommunication and eternal damnation, this is rock’n roll.”