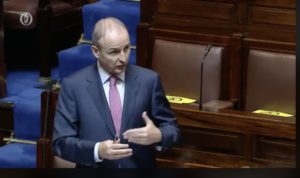 TAOISEACH Micheál Martin has admitted there are no easy ways to implement what he described as “crude and very absolute measures” that are likely to bring Ireland under another stringent lockdown.

Speaking on RTE Radio’s ‘News At One’ this afternoon, Mr Martin told Bryan Dobson: “We’re not talking about the same length as the last (Level 5) period because, by, by the end of February, for example we will have a substantial number of people vaccinated, particularly in long term care facilities and in healthcare workers which gives us greater room for manoeuvrability.”

Asked what the benchmark will be for re-opening schools, which are now set to remain closed for at least the whole of January, Mr Martin replied: “the fundamental issue will be (that) we want to see the trajectory of the disease now in (terms of it) going in the opposite direction to the one that’s going in now and so we need to go back to the old phase of flattening the curve; we need to get to turn this around. And we will assess this again on the 30th of January, and we will obviously engage with public health in relation to obviously reviewing it from here onwards.”

As for what restrictions may mean in terms of construction and manufacturing, the Taoiseach said that they too were also up for discussion during the course of today’s Cabinet Covid Committee meeting.

Adherence to the guidelines 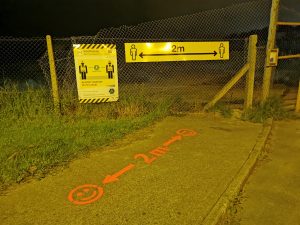 But if reducing morbidity is a key objective of the pending measures likely to be introduced/re-introduced, Mr Martin was asked: “Can you continue to allow some 200,000 construction workers to move backwards and forwards?” He replied: “That is on the agenda as well today and we will be taking decisions in relation to that sector as well, and other areas also in terms of endeavouring to achieve that objective.”

When pressed further on the issue of construction sites, Mr Martin stated: “They’ve (the aforementioned sector) been very, very effective. But I stress: this isn’t about one sector, and how one sector is performing. It’s about an overall societal response to a very rapid spread in this phase of the virus, and that’s the context – and it’s a collective societal response – that’s the principle that will govern decisions today. It’s not a reflection on any individual sector that have performed brilliantly, the schools have performed brilliantly, the entire school communities have been exceptional in terms of how they’ve managed education in the learning environment right up to the Christmas period. And I think that that gives us confidence into the future in terms of reopening.”

As for the prospect of the five-kilometre (from home) exercise zone restriction, as previously suggested by coalition colleague Eamon Ryan being further reduced to two kilometres, Mr Martin said: “Again, we’re looking at maintaining the five k but that’s not necessarily on the agenda today…We believe the five k is quite a restrictive measure om people and we’re very conscious of psychological health, mental health, the well-being of people to get out and get exercise, that’s important so there has to be balance on all of these things.”