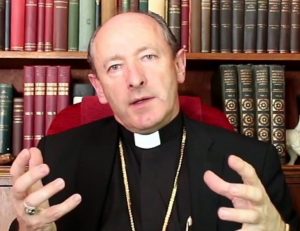 BISHOP of Waterford and Lismore Alphonsus Cullinan has called for the online removal of a ‘Waterford Whispers News’ New Year’s Eve sketch which at the time of posting, has generated almost 5,000 complaints to RTE.

In a letter to parish pastoral councils and parishioners, Bishop Cullinan wrote: “On Thursday night last, during the RTE 1 New Year’s Eve countdown programme, there as a blasphemous clip/fake news item accusing God, dressed up as an old man, of having raped a middle eastern teenager i.e. Our Lady. The very thought of this is revolting and all Catholics and people of faith have been offended by the national broadcaster. It has also used the issue of rape in the context of supposed humour.”

Bishop Cullinan said RTE had issued an “apology of sorts” while noting that “the offending piece remains on the RTE Player”. Asking parishioners to make complaints about the sketch to both RTE and the Broadcasting Authority of Ireland (BAI), Bishop Cullinan wrote: “The more complaints that they receive the slower they will be in the future to gratuitously insult our Lady and our God as well as making fun of the issue of rape”.

Meanwhile, former RTE News presenter Aengus MacGrianna, who featured in the sketch, has issued an apology in relation to his tole in the sketch via his Twitter feed. “Truly I am deeply sorry for the offence, distress and hurt caused,” he posted. “It was wrong for me. It was wrong of me.” 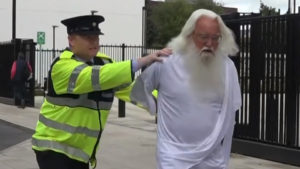 During the satirical review of the year sketch on RTE One, MacGrianna said: “A shocking revelation this year (as) God became the latest figure to be implicated in the ongoing sexual harassment scandal…

“The five-billion-year-old stood accused of forcing himself on a young middle-eastern migrant and allegedly impregnating her against her will, before being sentenced to two years in prison, with the last 24 months suspended.”

In a weekend apology, RTE recognised “that matters which can cause offence naturally differ from person to person, within comedy and satire in particular.

“Having reviewed the feedback and complaints received up to this point, RTÉ wishes to apologise to those who were offended by the segment.

“The formal complaints received by RTÉ are being entered into our complaints system and will be responded to in accordance with the relevant statutory process.”

The sketch has also gained international media attention in outlets such as Russia Today (RT) and The Guardian.