View From The Blue: Honouring The Good Shepherd 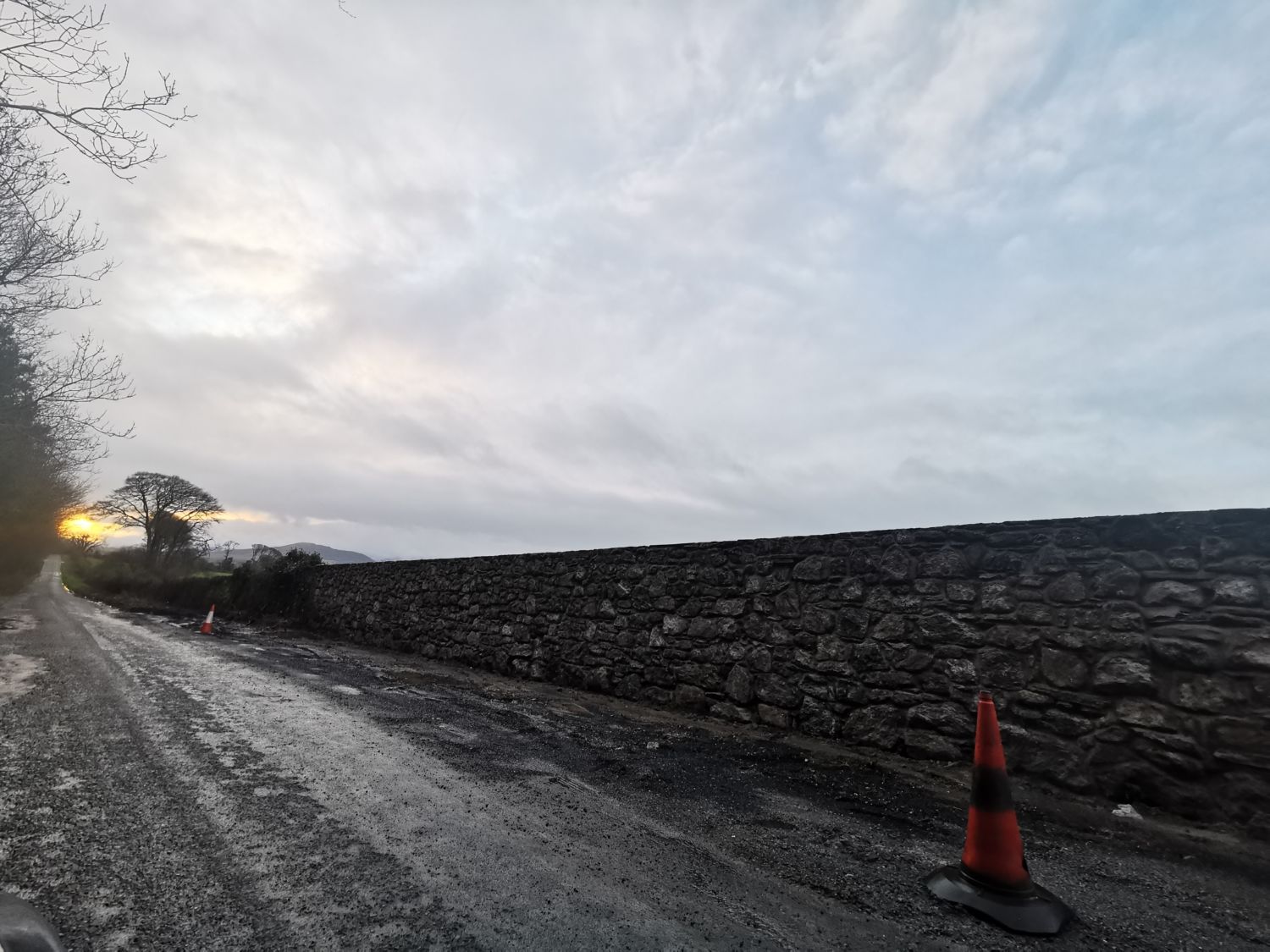 A rebuilt section of the Curraghmore Wall on the road between Portlaw and Clonea Power.

DECEMBER 27th. I pull in along a stretch of road above my homeplace in Portlaw to take in a job brilliantly done. A significant section of the Curraghmore Wall, the stoniest stretch I know best, has been masterfully reconstituted over the previous five to six weeks.

Below a blanket of grey cloud and with the dipping sun providing a beautiful golden scar just above the horizon directly ahead, I drew great satisfaction from the efforts of the men who made this section anew. They’d re-assembled something with a skill and level of precision that I envy.

A sizeable expanse of the wall had collapsed inward into a vast field known as the ‘Sheep Walk’. It had lain a defeated, forlorn and capsized pile for over a year and a half.

For at least half of that time, I’d passed that broken wall with the homestead dogs on several mornings before I headed to work, before the world as we know it was turned on its head. The previous Spring – when we could hug each other freely – feels like a decade ago from this juncture.

One particularly fresh pre-Covid morning, a sheep had entangled itself on some wire adjacent to the rocky sarcophagus.

I’d two dogs with me, one a sprightly lodger from the midlands, whose liveliness precluded my clambering over a temporary fence between field and road to assist the sheep. Thankfully, I had the estate manager’s mobile number on my phone so I texted immediately to alert him to the momentarily trapped animal, who was liberated soon afterwards.

If I’d not had the dogs to walk that morning, that sheep might have reached irretrievable levels of agitation. Additionally, I’d have had no reason for walking up the road that morning without my four-legged friends requiring some exercise.

That text, in addition to that early walk, felt like my good deed for that day. But there was a bit more to it than that.

My Grandad Jimmy Keyes was a shepherd in Curraghmore for most of his adult life. He was, literally, the Good Shepherd. A gentle, softly-spoken man who exuded calm and grace, Grandad was as manually dextrous as any person I’ve ever known.

He crafted much of the furniture in the home he and my Granny Kit made for themselves, my Dad and two Aunts. With the assistance of one of my older brothers, Grandad once re-assembled a chainsaw without reverting to the manual. He was a brilliant man, someone who wore his talent like gossamer. More importantly, he was a kind man.

Grandad died on Christmas Day, 1988, aged 74. I was nine and a half at the time. Grandad’s death was my first experience of grief. The sadness was overwhelming.

I wished I’d had more time with him but I’m grateful I remember Grandad well enough to recognise how thoughtful and admirable a man he was and how he never entered into any task half-baked.

Just like my other Grandad, Terry O’Hara, Jimmy extolled the virtues of reading to the little ones in his universe, which makes me think he’d be pleased to know I’ve made a living with words for over 21 years. 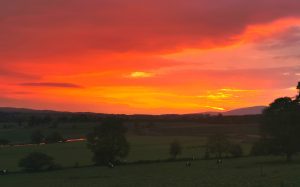 Mid-June 2020: The joy of a Curraghmore sunset.

My grandparents are never, ever far from my thoughts. I was blessed to live with Kit and Terry for several years respectively, with Curraghmore and Brown Street (where Terry and Lily happily lived) becoming homes to me just as much as Sallyhene shall always be.

A seasonal message from a long-standing family friend, currently ensconced as a cleric in Finglas, brought both Grandad Keyes and my own good fortune front and centre when I sat to consider this week’s column.

A life-long admirer of the works of Patrick Kavanagh (as I myself have been since my Secondary School days), my friend’s Christmas message referenced the poet’s most quoted lines: “God is in the bits and pieces of Everyday:  A kiss here, a laugh again, and sometimes tears.”

He adds: “Kavanagh invites us to look at the world and to see beauty, in the things we take for granted. But he does more than that: he goes beneath the beauty and shows us, the inner meaning, ‘Until one day, we will recognise the face of our incarnate God of surprises and disguises everywhere.’”

The sum total of our lives truly rests within those “bits and pieces”; the outings with our Grandparents, the fun of growing up in a busy home full of kids and dogs and, in my own case, spending so much time in Curraghmore, my very own secret garden.

This was where my Grandad bottle-fed lambs, diligently tended to his flock and, on his downtime, picked up the accordion to strike up a happy tune in a home where the welcome was always as warm as the stove. 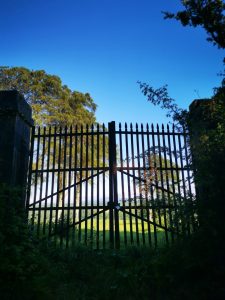 A gate into the Curraghmore ‘Sheep Walk’ barely a mile from where I grew up.

“I still have dogs to look after,” I wrote in my reply to my Finglas correspondent. “I’m in Dad’s footsteps, Grandad’s footsteps – every day. And I’m glad of that. I go to Kilcash and Grangemockler each Christmas Eve and lay a wreath at the Strang/Keyes graves. Doing what Dad did. Honouring him. Honouring his Grandparents. Nono (my Aunt). Phil and Annie (my Granduncle and Grandaunt). Toor and Ballypatrick. All bits and pieces of my everyday. The Waterford man by way of Slievenamon and West Cork. A proud Munster mongrel!”

At a time of persisting uncertainty in our wider world, I draw solace from the people and places I know and love best.

And the symbolism of a rebuilt wall, re-enclosing my Grandad’s outdoor office, fills me with hope not only for 2021 – but for the many years yet to come. Athbhliain faoi mhaise daoibh.

Mother and Baby Homes victims should be “placed first and foremost”

Frustration over lack of N24 and N25 progress